[OT] GET READY TO MATCH THE STARS with IRON_CHEF!

I am Iron_Chef. I love spaghetti, female contestants and the _____ RPG.

Fill in the BLANK and win a fabulous No-Prize!

Which "Match Game" panelist are you? Find out here:
http://mywebpages.comcast.net/matchgame/
Y

Congratulations! You've won a handsome jpeg of American Tourister luggage (slightly used by our furry friend in the cage). Thanks for playing!

Why the shades? 'Cause the sun never sets on the cool...

Although I have to say I don't for one second recognise the game show.
I

Although I have to say I don't for one second recognise the game show.
Click to expand...

Lee Scolin said:
Although I have to say I don't for one second recognise the game show.
Click to expand...

Thanks for asking! The show is MATCH GAME (and MATCH GAME PM). The greatest game show(s) ever! It ran on CBS forever.

There was also a "dummy spot" on the bottom left of the celebrity tiers where a real idiot would always sit giving rotten answer after rotten answer until booted off the show in favor of a new dummy.

Louisa Moritz, a "real dummy" as far as her answers were concerned...

"Did you hear what happened to the 102-year-old lady at the department store? She lost her BLANK in the revolving door."

First contestant to match the most celebrities in two rounds of play (two chances to fill in the blanks) wins a chance to do a "Super Match" with a "fill in the blank" phrase generated from the audience. 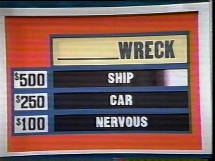 They can request answers from three celebrities of their choice; the contestant then either chooses one of the celebrities answers or comes up with one of his own. If the answer matches one of the top three answers given by the audience, they win a variable amount of cash ($500 for#1 answer, $250 for #2 answer, $100 for #3 answer) and a lucky spin on the "Star Wheel" to win even more $ (again by matching the answer given by the celebrity who the wheel lands on). 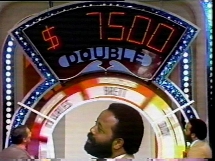 If the wheel lands on a special gold star, the prize $ is doubled. Then the game begins all over again.

The reason the show was so popular (despite the lame format), was because of the hilarious, impromptu responses from contestants and celebrities alike (often met with boos by the audience), the incredible charisma of the host, and the "chemistry" between the celebrities (like oil and water in many cases).

Lee Scolin said:
Kids! I'll kids ya! 31 year old father thank you very much! :wink:
Although I have to say I don't for one second recognise the game show.
Click to expand...

I didn't really have any to spare....

Here is an example of play on Match Game for your edification.

GET READY TO MATCH THE STARS
IN THE STAR-STUDDED, BIG MONEY,
MATCH GAME '75!

At this point, the celebrities brainstorm and furiously write down their answers. The host then reads the question again and asks the contestant for their answer. For purposes of this example, we'll say the contestant answers "kissing".

AND NOW WE GO TO THE CREATURES FROM THE DARK LAGOON FOR ANSWERS. ALL RIGHT, YOU WEIRDOS, LET'S SEE IF ANY OF YOU MATCH OUR CONTESTANT! CELEBRITIES, REVEAL YOUR ANSWERS PLEASE...

KISSING, HUH? WELL, I GUESS I CAN SEE WHERE KISSING CAN LEAD TO MAKING BABIES, ALL RIGHT! SEE ME AFTER THE SHOW AND WE'LL PUT YOUR THEORY TO THE TEST, WHADDYA SAY, HONEY?

COWS? THAT'S A ROTTEN ANSWER, SARAH! OKAY, WHO'S NEXT?

NAVEL? BABIES COME FROM THE NAVEL? I GUESS IF DUMB DORA GOT A C-SECTION THAT ANSWER MIGHT MAKE SENSE.

WE'VE GOT THREE MATCHES! THE SCORE IS THREE TO NOTHING. TIME FOR THE NEXT QUESTION...
I

Pushing 40 here and somethings are best left far in the past! :shock:
A

Thanks for the Plug!

Congrats on that!
L

So it's just an American Blankety Blank then?
You must log in or register to reply here.