Condottiere said:
Why not give spacecraft wings, and attach missiles externally to pylons? Or instead of missiles, gun packs?

Because space/volume and not weight is used as the limiting factor?
With the current system you determine the maximum tonnage of ship, which means space/volume with 1t = 14m3. Everything that uses up tonnage has to be subtracted from this maximum. You can put things, that use up tonnage, outside the hull of course, effectively decreasing the size of the hull accordingly, as long as the overall maximum tonnage stays the same.
In regards to weapons other limits exits, such as Hard-/Firmpoints, which in turn determine the number of fixed mounts, turrets, etc. Is this limit too restricting in the current system?
Last edited: Aug 10, 2022
G

I came (on first browse) across this discrepancy in the book:

On page 36, the text under Missiles states The listed cost is for 12 missiles. But the table below has in the header Cost per missile. Which one is right?

The Core 2022 book has this to say: Each turret with one or more missile racks holds 12 missiles and costs Cr250 000 to refill all 12. (decimal space added for legibility)

As a additional point, could you consider adding some form of decimal separator to make big number more readable? I added a space above, as suggested by wikipedia ( https://en.wikipedia.org/wiki/Decimal_separator ).
C

To reiterate, past explanation is that ordnance is calculated in tonne lots, whether cost or number.

Which is why you should stop using incorrect units just for chuckles.

Staff member
Just to let you all know, the High Guard 2022 file has just been updated - just re-download it and you will have the latest version!
A

What happened to the light fighter (p.137)? 0,24 points of armour?
Also, I've long wondered about them... Several Imperial Navy ships carry 10 dt light fighters. Are they supposed to be this model, or is there a not yet revealed TL15 10 dt light Imperial fighter as well out there?

A couple of minor things on p.229: I can't seem to find the armoury or med bay on the deckplan? Unless they're just astern of the workshop on deck 2? (The area flagged as (10) Power Plant)

The amidships lift and hatch assembly (found just by the workshop on deck 2) doesn't seem to go anywhere? Well, the hatch opens up into a passage between two staterooms, but the lift seems blocked? Airlocks?

Finally, the orbital bombardment and orbital strike traits. The newest file is clearer regarding which blast trait isn't given to orbital strike weapons, but it almost seems harsh, doesn't it? Before the clarification I assumed they wouldn't get Blast 100 and 'have to make do' with Blast 10, like regular weapons. When even a lowly beam laser has blast 10, a weapon three times as strong lack it? Perhaps it isn't so bad, but in such case I'd like to petition to give ortillery missiles either orbital bombardment trait or at least give them blast 10. A starship scale 1DD weapon with no blast effect at all seems... off?

All in all, there's a lot to be happy for in this updated High Guard! I'm very pleased I decided to get it! (random goodie post to follow later!)
A

The new chapter on crew roles was a great addition! Good read both for the referee and for the players, so they can better understand their role aboard a ship!

The new armour and damage multiplication mechanics are very interesting! I haven't run any detailed simulations, but gut feeling says it's good! Armour and other damage reductions are very relevant and useable, while also allowing larger weapons to actually deal vastly more damage! Brilliant move! I also like that AP has made its way into space combat, especially considering the higher armour values attainable nowadays.

Boarding actions, another great addition! Very interesting idea to have heavier equipment impose penalties! I toyed with similar solutions, but you took it a step further by starting the penalties at the carbine stage. It did trouble me that by strict rules reading, long arms would be superior to pistols and carbines during boarding thanks to their (usually) vastly suerior range (and thus bonus to hit for being in close range).

Staff member
On Friday 2nd of September 19:00 (UK time) we will going live for the first time on our Discord to answer all your High Guard Update 2022 questions! I will be joined with writer Chris Griffen and Graphics and Layout Artist Mongoose Katrina!
Join our Discord Server here: https://discord.gg/gRR56YYfNy

Staff member
Just to let you all know, a new update of High Guard 2022 is now available - simply re-download it from our website or Drivethru to get the very latest version!

Thanks, Matt. Any chance on a summary of changes?
T

The Valiant still shows Hull 528.
A

Oh… Maybe my comment about the Valiant is premature. Does anyone have the new version?

That’s a relief! Hopefully the collectors edition gets the updated PDF soon. 😀

Sorry, that was completely my bad - if you download it now you will have the latest version!

Wouldn't it be funny if they send the not-updated files for the deluxe edition to the printer - NOT.
A

MongooseMatt said:
Sorry, that was completely my bad - if you download it now you will have the latest version!
Click to expand...

Join us live on Discord Friday 2nd of September at 19:00 (UK time)! Where I will be joined by writer Chris Griffen and Graphics and Layout Artist Mongoose Katrina to answer all your High Guard 2022 Update questions! If this isn't compatible with your time zone, don't fear; we will release a recording on our YouTube next week.
You can find the link to our Discord and YouTube in our LinkTree here https://linktr.ee/mongoosepublishing
Who can we expect to be joining us? 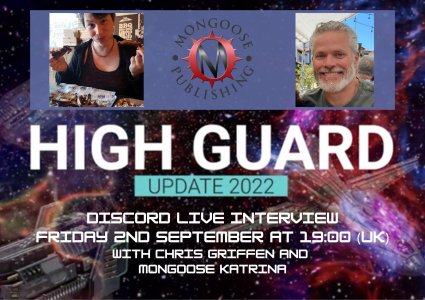 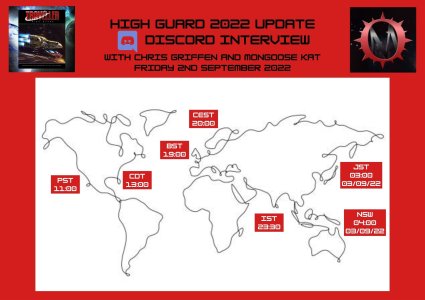 Monday at 8:47 AM
MongooseMatt