IMTU Notes:
I'm totally making up the Marinet unit, the general colors of the gear [within reasonable limits], and the battle location and date. We know the Zho's tried to land on Jewel several times during the Siege and that they made two serious attempts at investing the world beyond just raiding.

So I just made up the location, a mineral rich desert area that was suitable for Consular Guard teleports and follow-on landing craft.
Because of the speed at which the Marines can deploy, they are usually the 'first responders' to a landing in a wilderness LZ. Army Lift Infantry troops are not far behind, but it's usually the Marines that make first contact with the enemy.

I assume that Marine Battle Dress has camouflage circuitry installed, but this is usually uploaded to the suit computer in advance. Because of the suddenness of the Zho landing, there wasn't time to do these uploads. It should also be noted that the Marines often deploy without camouflage as a way of informing the enemy that the 'pros from Rhylanor' have arrived. The default static color of Marine BD is a dull grey color called 'shipmetal' in IN and IMF jargon. The dull bronze/gold Combat Leader tabs are: shoulder for squad leaders and junior officers, helmet stripe for company commanders and field grade officers, full helmet for battalion commanders and regimental commanders, and shoulder, bicep, helmet for all general officers... but if a general is suiting up in BD, things have gotten seriously trake shaped. 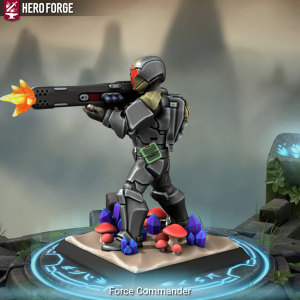 The range of options that HeroForge offers is quite impressive. If I understand it correctly you can put your miniature together as you like and have it 3D printed and shipped to you or print it yourself.
I'm not sure if you are allowed to use an image that you have created with HeroForge outside their domain, e.g. for a Virtual Table Top(VTT), though.
Link to the HeroForge website: https://www.heroforge.com/

You can subscribe to HF [US$ 3.99/mo] and they'll render your fig down into an image suitable for a VTT format.
In this image, I'm just sharing my work and giving HF free advertising.
I will say this... I bought one of their figs in color plastic. It was VERY expensive, like 'Warhammer figure' expensive. If you're on a budget [and most of us are] I would think twice and probably a third time before I chose to spend that kind of money. I am satisfied with what I bought, and I don't know a lot about 3D printing, but, well, 'expensive'. 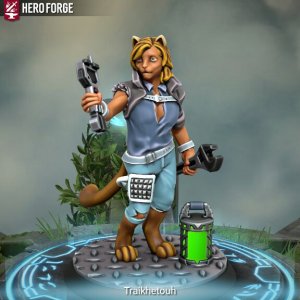 Nice work. I would have done some different stuff, but you're obviously happy with it and other than the extra digits it's right in there with Traveller Aslan.

@Reynard
Inspired by your crazy Aslan Treikhetouh, meet Dzogheng, my Vargr Merchant. He died in a glorious burst of plasma fire in Ley Sector...
True Story! 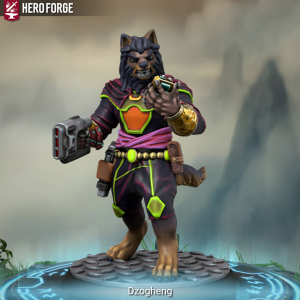 An NPC from the Zhodani campaign I'm running...
Vlezpridliashav

Vlezpridliashav is a very senior Zhodani noble and reserve Consular Navy officer. Here, he wears the standard dull blue-gray ship suit of his service with embellishments for an officer [though a junior officer.. Merely a Deck Officer (03)]. His turban denotes that he serves the Consulate at the Consular level, while the feather depicts him as retired. The pin notes that he has trained in multiple psiconic disciplines but is primarily a Telepath.
He is highly thought of in Consular service, having been awarded the Nenjchinze'driante in gold for governmental or diplomatic success.
He otherwise carries the standard Consular Navy Snub Pistol and equipment pouch.

IMTU Notes: Noble turbans and intendant diadems are colored blue-gray for Naval service, a dull gray-green for Army or Guards service. Those in elected offices are colored Copper for Planetary office, Bronze for Subsector office, Silver /White for Provincial office, and Gold for Consulate level offices. A feather of any color denotes a former office holder who has retired from office.
Turban and diadem gems denote the psionic disciplines... sapphire for Telepathy, emerald for Clairvoyance, onyx for Teleportation, etc. A gold-tone ring denotes only one talent at the trained level or greater [i.e. Talent Skill Level 1 +], a silver-tone around the gem denotes advanced training in two or more disciplines. 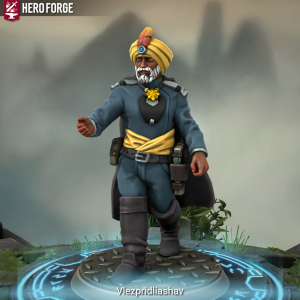 ottarrus said:
Nice work. I would have done some different stuff, but you're obviously happy with it and other than the extra digits it's right in there with Traveller Aslan.
Click to expand...

She's less concerned about her appearance compared to her ship obsession unless she's disguising herself as a high priestess of the aslan gods while wearing a very sheer linen dress.

They still don't know where she hid the stunner.

IMTU Notes:
I use the United Armies model from GT: Ground Forces for my 'Imperial Army' model. This presumes that Army troops are equipped to TL 11-13. The standard unit-bloc that all divisions are made from is the Lift Infantry Brigade, made up of similarly equipped battalions from different regiments. An Infantry Regiment has two battalions deployed and a two-company Depot Detachment for training cadre, the Regimental HQ, replacement pool and a light duty detachment of discharged hospital patients who are not yet fit to return to full duty.

Worlds with a POP 7 and TL8 and above are required to contribute regimental sized units to the United Army of their subsector. Worlds that don't meet these UWP standard may volunteer units down to a minimum size of a battalion. Additionally, any Imperial citizen can enlist in the United Army of his subsector at any Starport of Class C or better even if their world does not field an army of its own.

The basic uniform of the United Armies is dull green tunic /shirt and trousers with boots and a field cap. This is, of course, modified for worlds that do not have a 'shirt sleeve' environment. Each world army has its own dress uniform, which officers are required to buy but enlisted men usually get by with a set of what the British Army would call 'No. 2 Dress' and the American Army would call 'Class A', which is of a standard Imperial pattern with local world distinctions added. Some world armies are almost demure in their dress uniforms, some look like peacocks on payday.

The basic combat uniform of the United Armies is a modified Combat Environment Suit that may be sealed against vacuum and reasonable amounts of radiation [equivalent to TL 13 Vacc Suit] augmented with formed cera-plastic armored helmet, full shoulder-to-finger vambraces, cuirass, demi-greaves, and boots [aka 'combat armor']. Embedded within the armor is a 4-hour PLSS, tactical computer, communications suite, and PRIS spectrum visual aids. NCOs often carry an Extended Operations Pack that has spare LO2 bottles and energy cells for any nearby troops. Combat leader insignia is the same as Imperial Marines... dull bronze/gold shoulders for squad leaders and junior officers, shoulders and helmet stripe for company commanders and field grade officers [it would be a brighter bronze in the Copperheads, so as to stand out], shoulder and full helmet for battalion and regimental commanders [bronze w/ copper stripe in this regiment], and shoulder, bicep, and helmet for all general officers.

The world of Emerald is an enthusiastic contributor to the needs of the United Army of Jewel Subsector. The 33rd Infantry is part of Emeralds standing planetary army and seconded to subsector's United Army. Early in Emerald's colonization, Vargr raiders tried to capture the nascent colony. Among the raiders were Human pirates, so identification insignia was required. A regional company of the Planetary Militia chose a copper colored hatband during these operations, and the descendant 33rd Infantry has chosen to paint their helmets a dull copper to honor this lineage. Emerald's 33rd Infantry Regiment is the 1328th contributed regiment in the United Army of the Spinward Marches, thus the unit carries both 'identities'... the 33rd Infantry of Emerald and the 1328th Lift Infantry of the Spinward Marches Line. 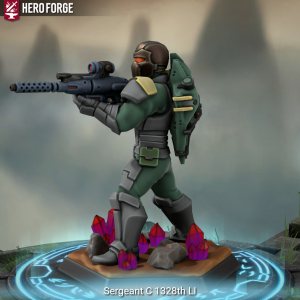 These look pretty good! I particularly like the Zho noble. I guess you just did screen captures of the minis, right?

I could very well use this for my Traveller VTT game for PC/NPC tokens (I never have enough good ones). You can get passable Vargr and Aslan, even.

Thanks. I've discovered that the real trick is stopping yourself from going back into them and messing with stuff
G

Don't forget K'kree. There are Centaur models, after all. You could even use the reptilian-insectile models to make a passable Droyne. Bwaps are completely doable as well.

Quick make up for a noble antagonist for my current group, bit corny I admit but hey some humor is needed ,,,,right,,,,, 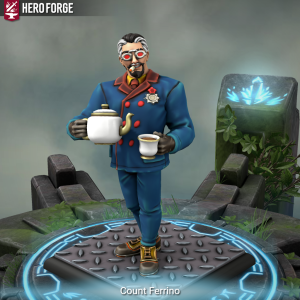 Capt. Ganidiirsi O'Flynn
Master and Commander of the IMV Wastrel

Capt. O'Flynn did one term in the Scouts and then several terms as a merchant. He is a firm believer in the old spacer adage 'Keep your friends close, but your gauss pistol closer.' He is at the culmination of a deal... checking his agent program for the necessary deposit into his account before delivery to a shady customer.
He wears a fairly standard ship's coverall, with protective cargo-handlers leggings. Over this he has an armored topcoat. He carries a TL12 communicator and a TL 13 Gauss Pistol. 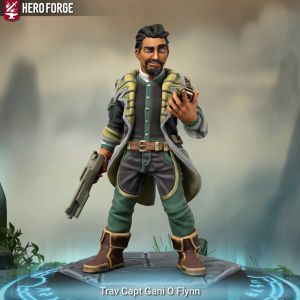 Excuse me sir, but I am going to have to ask you to put down the Ancients technology you are holding and step away from the police vehicle. 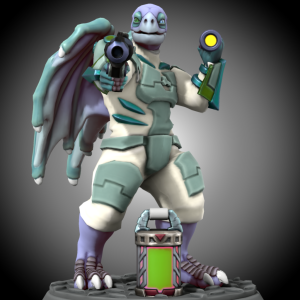 Troyskay, a Droyne the Speaker Sport caste, is greeting a party of invited guests and is therefore being diplomatically welcoming. He wears a standard working jumpsuit with a mechanical wings harness. He is armed, though only with an autopistol.

Design notes:
We have no input on Droyne skin coloration, but it is reasonable to assume that there are many colors and combinations. It should be noted that there is no evidence of any kind of 'racial' divide based on skin color. All social and political division is based on oytrip [community] membership, an individual is either a member of a given oytrip or they are a foreigner.
I designed this figure to be about half the height of a human /Aslan sized character. 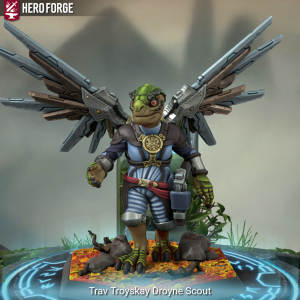 Well, a K'Kree worked out fairly well too.

Rrungbaxk the Merchant is very unhappy with what he sees on his portable computer.

Design notes: Obviously, the HF program doesn't allow for 'finger-hooves'. The hairline is also as close as I could come to the Merchant caste tonsure. As upset as he is, Rrngbaxk is not a soldier and is therefore not armed. He has bodyguards immediately available who will be happy to handle any 'dirty work' regarding the filthy g'naak that has offended their master. 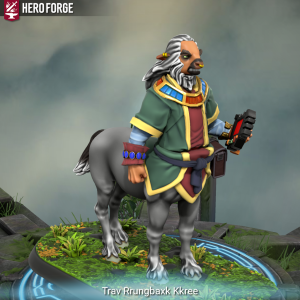 "Sir, or whatever you are, my scanner is detecting ridiculously high levels of biological material deemed illegal by Imperial law, in your luggage. I need for you to place your luggage on the ground and raise your hands, all of them." 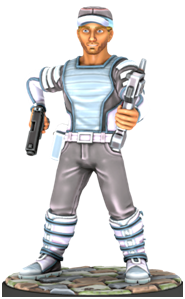 Places Mongoose got it Wrong
2