G. Another option for launch and recovery under acceleration would be having the launch facilities in the rear.

H. If you straight line fly out of the rear, through a nice wide open hole, the risk of getting hit by the carrier's hull would be minimal.

I. In theory, you could make the recovery deck also be used as a launchpad.

J. If not, hangar bay doors are placed as far as to the rear as possible.

K. You could have a physical rail system as part of catch and release.
C

L. Built into the ceiling of a cargo hold, this overhead gantry crane is designed to shift cargo containers in and out of the ship. The crane’s mechanism moves about the bay on a sliding jig and can extend beyond the cargo door on a gibbet to deposit freight directly onto a dockside or vehicle. The crane is strong enough to lift fully loaded containers of up to 65 tons and can couple with most pallets and crates.

M. Are there cranes in hangars? Probably, but they're not mentioned.

N. Probably simpler and safer to release the object from the crane, than attempting to try and dock to the crane.

P. Like docking clamps, cranes probably can be reinforced.
C

Q. A grappling arm is a remotely controlled device used to pick up or manipulate objects in space. The arm is a flexible tentacle of thousands of telescoping segments, capable of reaching out to 250 metres. The arm ends in a set of cameras and grippers of varying sizes, from large claws to tiny micro-manipulators. It also carries a toolkit that can be customised for a particular task.

S. That should include spacecraft upto ten tonnes.

T. Though it appears that multiples could grab practically any sized spacecraft.

U. The ratio is six to ten, so a fifty tonne cutter would need thirty tonnes of arms at fifteen megastarbux. 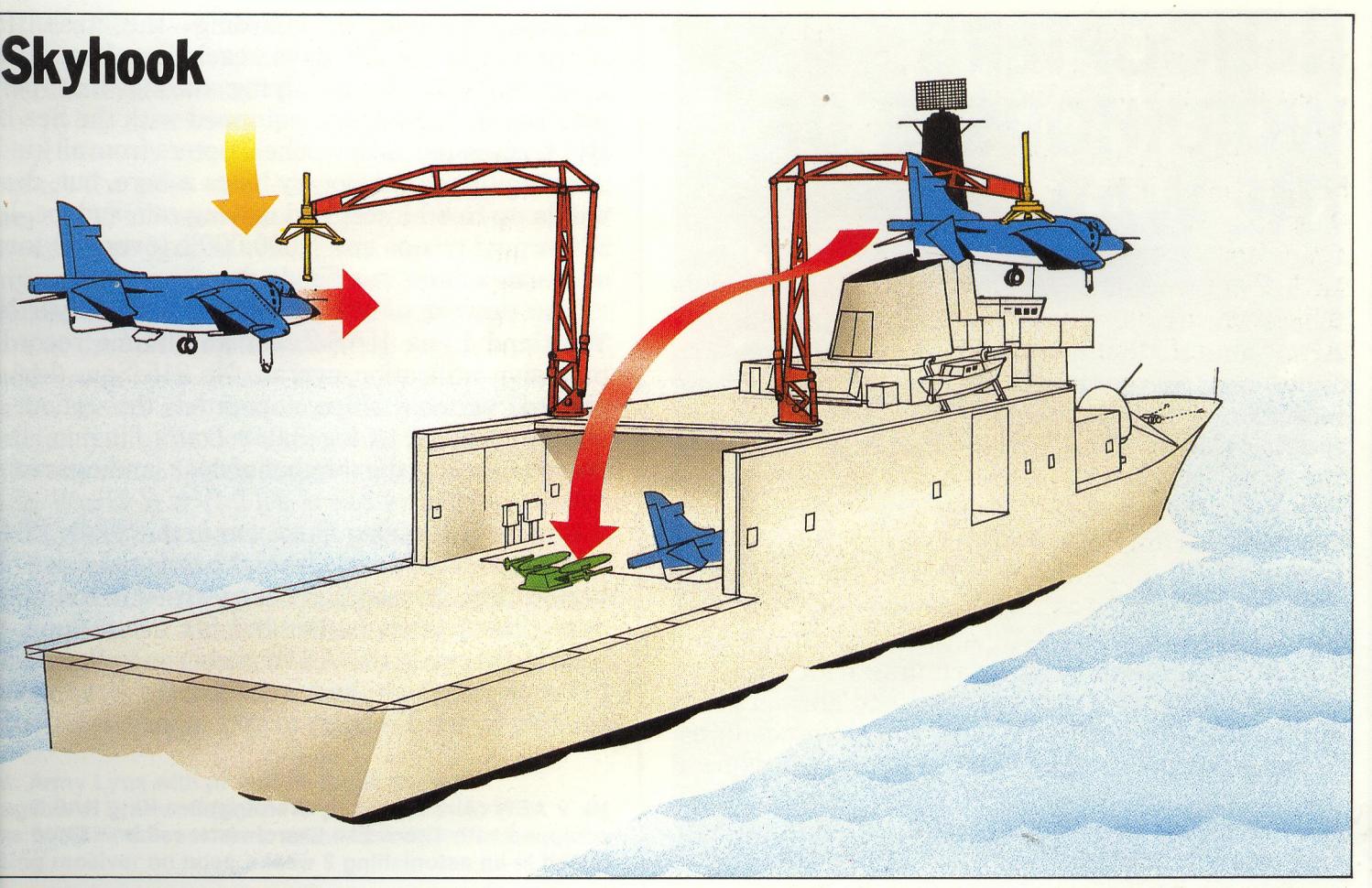 V. You can reconfigure hangars and docking spaces, but once you decide on a launch tube and recovery deck launch facilities, you're stuck with it.

W. Interoperability would be one of the prime consideration of the Confederation Naval Staff.

X. Since no indication has been given that cockpits are compatible spacecraft of fifty tonne plus hulls, that would be the upper limitation.

Y. It's not that with the costs involved with military 'craft a semimegastarbux matters, but it could in a protracted conflict.

Z. If armour plating is important, than lower end would be twenty six tonnes.

Q. A grappling arm is a remotely controlled device used to pick up or manipulate objects in space. The arm is a flexible tentacle of thousands of telescoping segments, capable of reaching out to 250 metres. The arm ends in a set of cameras and grippers of varying sizes, from large claws to tiny micro-manipulators. It also carries a toolkit that can be customised for a particular task.

S. That should include spacecraft upto ten tonnes.

T. Though it appears that multiples could grab practically any sized spacecraft.

U. The ratio is six to ten, so a fifty tonne cutter would need thirty tonnes of arms at fifteen megastarbux.

didn't the Harriers EOS in 2003, we do have some in the F-35 lightning II with STOVL but the skyhook isn't used correct?
C

The Royal Navy was scrounging for air capability, at that time, as the carriers were being retired or sold off, so grasping at straws.

Through deck cruisers were approved through sleight of hand.

Half a century later, you have, reluctantly, two fleet carriers, and that, partly, was justified for job security up north.

If you were to poll pilots, I think they'd opt for a flight deck, rather than get dropped or grabbed; but it's also the middle of space, so gravity is less of a factor.

1. If we're in the mood for grabbing stuff, then there are tractor beams.

4. Lack of details makes it hard to give a concrete answer how they would be utilized as either a launching or recovery device.

5. No mention is made that you have to cut acceleration when utilizing it.

6. Manipulation to either remove or place a spacecraft, or anything, into a hangar or cargo hold would likely require a clear line of sight.

7. I would guess this would be more practical for a stationary space station, so that the space station has complete control of the spacecraft.

8. One practical effect is that you can scale the tonnage it can be used on.

9. If you grab the spacecraft one gee band out, you probably could have the 'craft deposited in the hangar within six minutes.
C

A. You could embed the repulsor bay at the back of a hangar.

B. 'Cos I'm not too sure you wouldn't scratch the paint off a docking space wall, considering ten percent buffer.

C. Considering that the text implies that once the 'craft is tractored, it comes to a deadstop, plus one gee.

D. Presumably, reversing polarity again, you can push out a 'craft at one gee.

E. doesn't seem much point than in installing the repulsor bay in the minimal sized hanagra or cargo hold.

F. As the any other object between the tractored craft and the back of the hangar will break the lock.
C

G. You could also use a cable to winch in the 'craft.

H. Problem is, since the tow cable is one percent of the spacecraft, logic indicates it should be part of the smaller vessel.

I. The tricky part would be attaching the cable to the back of the hangar.

J. Easy for launching, since you can just let out the cable, and quick release it from the back of the hangar when sufficient distance has been achieved.

K. A harpoon, with the cable attached, might be the solution for recovery.
C

L. For any carrier that's supposedly frontline, a minimum of two launch tubes (and a pair of recovery decks) would be a requirement.

M. Since the aerospace group is the primary weapon weapon system, redundancy would be called for.

N. It seems unlikely that the Confederation Navy itself differentiates between strike, attack and fleet carrier subvariants.

O. All being subsumed under the term fighter.

Q. And so we get to the escort carrier.

S. The escort carrier would be a configurable empty steel box.

V. The interior diameter of the launch tube is likely the same as that of the docking space.

W. It's uncertain how much space is used as a marshalling yard.

X. You could make the docking spaces as part of a revolver car park.

Z. The full hangar connecting the launch tube and the recovery deck.
C

1. Traditionally, escort carriers were built in wartime with cheap commercial hulls, to make up the numbers.

2. They were meant as stand ins for actual carriers, who were required elsewhere, comparatively, had minimal protection and performance.

3. The aerospace group covers the range between six to fifty 'craft.

4. The thing is, in peacetime, there's less chance for someone to try to sink an escort carrier with a torpedo.

6. The other issue would be that damage control is less successful.

7. You could go further down the food chain, with merchant aircraft carriers, with really basic launch facilities.

8. Or have a bunch of merchantmen host a fighter each, with a one shot catapult.

9. I suspect the primary issue would be maintenance, for those solutions.
C

A. It doesn't look like the range would be greater than three parsecs.

B. Budget variant of the jump drive highly likely.

C. Since in Traveller build time is calculated per megastarbux per day, seems unlikely that more advanced versions would be utilized.

D. Since you have plenty of space for the fuel tanks, and energy sources are cheaper per tonne than a jump drive.

E. Escort carriers should be able to accompany merchant convoys, so that's at least two parsecs.

F. Three should be enough to accompany the (Confederation) fleet.
C

G. Acceleration would have to be able to keep up with the convoy.

H. Two seems the norm for most merchantmen.

K. It's not just support for the Confederation Navy units, but also for auxiliary ones composed of starwarships from member system navies.
C

L. It might be actually easier to just give each 'craft it's own hangar space.

N. A construction deck is a quarter more expensive than a full hangar, and you probably want one to put a 'craft together from spare parts.

O. Hangars and/or docking spaces can have double hatches, internal and external, that allow direct launch from the hull.

P. Assumption would be that the first hatch would be part of the cost of either hangar or docking space, but the second wouldn't be.
C

Q. There are two benefits for a five thousand and one tonne hull.

R. A quarter reduction in crew, not that it actually matters.

S. Distributed array, which allows the vessel to keep in motion.

T. However you're missing out by a tad of penalizing a spinal mount from hitting you at minus eight.

U. Two kilotonnes would make you immune, and minus two from bays, but I think that at that size, spinal mount packing starwarships would probably ignore you to begin with.
C

V. You could configure the escort carrier into either a catamaran, or a trimaran.

W. A hangar pod, a fuel tank pod, and/or the primary pod.

X. They don't all have to be five kilotonnes each, but it probably wouldn't hurt.

Y. The downside for configuring it as a trimaran, is that engineering increases by fifty percent.

1. The advantage of being a clamped hull is that you don't really need to have a separate manoeuvre drive or bridge.

2. You could utilize the spacestation template, which would make the bridge even cheaper.

3. Making it an actual integral pod would mean several weeks for detachment, or attachment.

4. You would have closed computer systems, which by the rules would be independent.

5. The hulls could be different configurations, and/or armour factors.

6. Since the hangar pod becomes basically external cargo, the primary hull bridge doesn't need to extend to that.

7. You can mix and match secondary pods, which could be mission specialized.

8. Likewise primary hulls, which could be very interesting if large numbers were accrued, and post battle, triaged.

A. Spacestation control centre is twenty tonnes and five megastarbux for five kilotonnes.

B. Presumably, command and control centre would add an additional twenty tonnes, and cost ten megastarbux.

C. Though the smart thing might be to just drop off a hundred tonne satellite, and that capability would cost two hundred kilostarbux.

D. You can use an extended array, since it's not accelerating.

E. Cheapness comes at a price.

F. Defense is only one hardpoint, and you can't hide.
Last edited: Jan 13, 2023
You must log in or register to reply here.