The AA-12 (Auto Assault-12), originally designed and known as the Atchisson Assault Shotgun, is an automatic combat shotgun developed in 1972 by Maxwell Atchisson. The most prominent feature is reduced recoil. The current 2005 version has been developed over 18 years since the patent was sold to Military Police Systems, Inc. The original design was the basis of several later weapons, including the USAS-12 combat shotgun. The shotgun fires in fully automatic mode only. However, the relatively low cyclic rate of fire of around 300 rounds per minute enables the shooter to fire semi-automatically de facto with brief trigger pulls. It is fed from either an 8-shell box magazine, or a 20- or 32-shell drum magazine.
C

For the shotgun, the game changer would have to be the gyrostabilizer at technological level nine.

Automatic would probably coincide with the rifle variant, so technological level six.

Gauss variant at technological level twelve is likely military grade, though I think I'll take a shot at a monobarrel and a skeet shooter.
C

1885 Mannlicher Self-Loading Rifle
In 1885 Ferdinand Mannlicher made an experimental self-loader based on work begun in 1883 in both semi-automatic and fully automatic modes. It was an impractical failure due to fouling by its black powder ammunition, but it influenced later designs. Furthermore, Mannlicher produced smokeless powder automatic rifles from the early 1890s onwards until his death in 1904.[1][2][3]

Cei-Rigotti
One of the world's first automatic rifles was the Italian Cei-Rigotti. Introduced in 1900, these 6.5mm Carcano or 7.65×53mm gas-operated, selective-fire carbines attracted considerable attention at the time.[4][5] They used 10-, 20- and 50-round box magazines.[5] The Cei-Rigotti had several failings, including frequent jams and erratic shooting.[5] In the end, no Army took an interest in the design and the rifle was abandoned before it could be further developed.[5] Although the rifle was never officially adopted by any military, it was tested extensively by the Italian Army during the lead-up to the First World War.[6]

Chauchat
The Chauchat, designed in 1907, was the first automatic rifle to be adopted by a military. Its official design was the Fusil Mitrailleur Modele 1915 CSRG. It was placed into French Infantry in 1916, and was used by the French army in the First World War. The Chauchat in 8mm Lebel was also extensively used in 1917–18 by the American Expeditionary Forces (A.E.F.), where it was officially designated as the "Automatic Rifle, Model 1915 (Chauchat)".[citation needed]


Lewis Gun
The Lewis Gun was invented in 1911 by Isaac Newton Lewis and first mass-produced in Belgium in 1913 for the .303 British cartridge, and widely used by the British army in the First World War, both by infantry and fitted to aircraft. Pan magazines are secured above the breech, holding either 47 or 97 rounds. Cooling fins surround the barrel. The weapon is gas operated and fires automatically at 500-600 rounds per minute.

More than 50,000 Lewis guns were produced during WW1, becoming the most common automatic weapon used by British and American troops. Although superseded by the Bren gun by 1939, nearly 60,000 Lewis guns were refurbished and reissued to British forces after the Dunkirk evacuation of 1940.


Fedorov Model 1916 Automatic Rifle
The Fedorov Avtomat (also anglicized as Federov, Russian: Автомат Фёдорова) or FA was a select-fire, crew-served automatic rifle and was one of the first practical automatic rifles, designed by Vladimir Grigoryevich Fyodorov in 1915 and produced in the Russian Empire and later in the Russian Soviet Federative Socialist Republic. A total of 3,200 Fedorov rifles were manufactured between 1915 and 1924 in the city of Kovrov; the vast majority of them were made after 1920. The weapon saw limited combat in World War I, but was used more substantially in the Russian Civil War and in the Winter War. In 1916, the Weapons Committee of the Russian Army made a decision to order no less than 25,000 Fedorov automatic rifles. In the summer of 1916, a company from the 189th Izmail Regiment was equipped with 8 Fedorov Avtomats. Trained in tactics with the new weapon, they concluded that the Fedorov worked best as a crew served weapon. The gunner armed with the Fedorov and an ammo bearer armed with an Arisaka rifle. As both weapons used the same ammo and same 5 round stripper clips, this allowed for the greatest flexibility. It also allowed for the ammo bearer to fire defensively, while the gunner reloaded. It was also recommended that the primary mode of fire be in semi-automatic, as the Fedorov's would rapidly overheat in full-auto. Some consider it to be an "early predecessor" or "ancestor" to the modern assault rifle,[7][8][9][10] while others believe that the Fedorov Avtomat was the world's first assault rifle.


M1918A2 Browning Automatic Rifle
The Browning Automatic Rifle (BAR) was one of the first practical automatic rifles. The BAR made its successful combat debut in World War I, and approximately 50,000 were made before the war came to an end.[11][12] The BAR arose from the concept of "walking fire", an idea urged upon the Americans by the French who used the Chauchat light machine gun to fulfill that role.[11] The BAR never entirely lived up to the designer's hopes; being neither a rifle nor a machinegun.[11] "For its day, though, it was a brilliant design produced in record time by John Browning, and it was bought and used by many countries around the world. It was the standard squad light automatic of the U.S. infantry during World War II and saw use in every theater of war."[11] The BAR was praised for its reliability and stopping power. "The US forces abandoned the BAR in the middle 1950s, though it was retained in reserve stocks for several years; it survived in smaller countries until the late 1970s."[11]
C

So, if I gausify the shotgun, the length of the barrel becomes irrelevant to the damage effect, only to the effective range of the projectile.
C

Do I need to be reminded of this? Turns out I do.

Does the toxic chemicals matter after a firefight onboard a spaceship?

Large-calibre [smoothbore ammunition] handguns cannot use any form of detachable magazine – this would make the weapon too wide to hold in the hand. 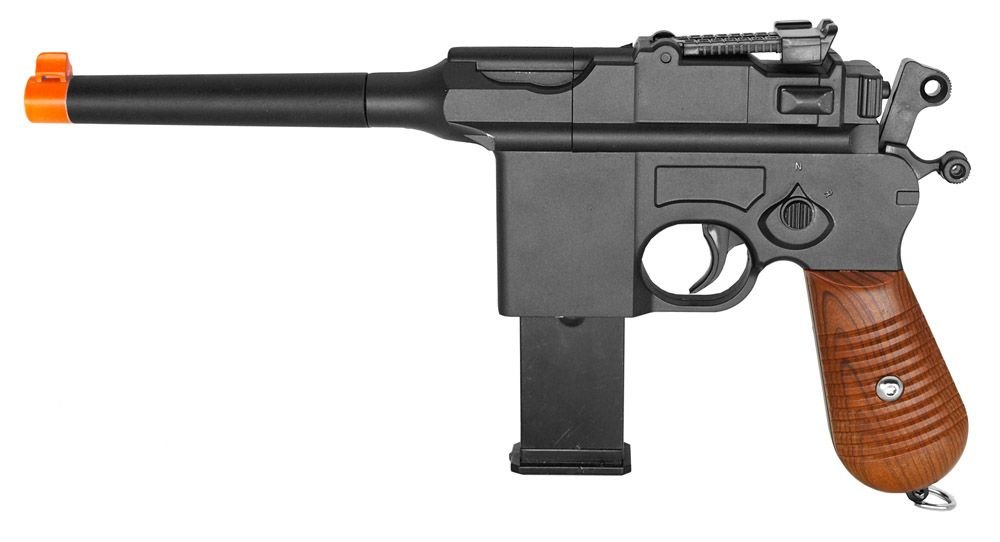 Revolver cylinders also tend to be forward of the trigger, and grip.
C 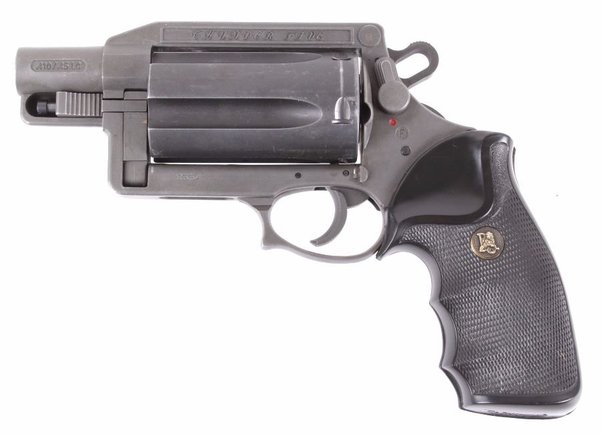 Or, at least, in front of the grip.
C

So barrel length for all designated slow velocity ammunition is irrelevant, except for range.
C

There have been concerns with lead contamination on firing ranges, so green ammunition is most likely used by planetary militaries whose politicians have environmental concerns.

Probably less concerned with using depleted uranium in someone else's backyard, and mercenaries tend to work on a budget.
C

I wonder what the case for caseless is?

There's got to be some advantage worth three times the asking price for the default cased variant?

And in the case for single shot receivers, could be cheaper than the cased variant, since you don't pay for ye casing, and could shove an explosive wad into the chamber after placing the slug.

Like a lot of six inch artillery shells.
S

Less mass so you can carry more ammo.
C

We might know that, but I haven't managed to track that down in the rules.

Alternatively, while volume would be the same, plastic casings and feedbelts would be lighter.
C

Maybe environmental conditions, considering that the magazine and the chamber would be somewhat sealed.

Caseless might be ideal in vacuum, considering that rocket propelled is likely caseless as well.
C

Gauss adds an additional point of recoil, so a longarm receiver would have seven points.

Four dice plus automatic three would be seven points.
C

So for handguns, light is two point of recoil, which is easily absorbed.

Medium gets you a point of recoil uncompensated with three dice.

Heavy adds bulky, plus that point of recoil.

Gauss adds an additional point, so it can soak up three dice; presumably, it could be adjustable so that the slug travels at less speed, so you could lower damage, the gauss variation of stun(nish).

Assault receiver is four, plus one, would make automatic two easy to handle for gauss; you could also take the four dice variant, and recoil compensation, or full automatic with three dice.

Recoil compensation on medium handgun would get you three dice minus four, so I'd take my chances with light.

Basically, you would want strength factor nine to deal with bulky weapons, though I'm wondering what about another point of contact, such as a two handed grip, a brace, a stock, or a forward grip.
C

A paper cartridge is one of various types of small arms ammunition used before the advent of the metallic cartridge. These cartridges consisted of a paper cylinder or cone containing the bullet, gunpowder, and in some cases, a primer or a lubricating and anti-fouling agent. Combustible cartridges are paper cartridges that use paper treated with oxidizers to allow them to burn completely upon ignition.[1][2][3]

Single shot would be considered no problem, but magazine fed would need a complete isolation and minimum heat exposure.

And of course, probably cheaper than brass or steel cased ammunition.
C

Just had a thought, do our default bullets actually ignite in the vacuum of space?
S

only tracers...
if you mean the propellent in the cartridge then yes, they should work in a vacuum (the mixture in the propellent has to contain the explosive and an oxidiser).
C

It consists of a mixture of sulfur, carbon (in the form of charcoal) and potassium nitrate (saltpeter). The sulfur and carbon act as fuels while the saltpeter is an oxidizer.[1][2]
You must log in or register to reply here.