Without a stock, full or otherwise, the gun is going to be penalized by minus two for any range beyond twenty five metres.

At ten percent to weight and cost, presumably of the completed weapon platform, that's not too bad for a handgun.

Folding stock adds only half the weight, but adds fifty percent more to the cost of the default full stock, plus is slightly less accurate.

You can always use the full stock as storage space.
C

So the stock and the barrel are each dependent on the final receiver cost and weight.

Single shot option is one fourth cheaper than default, but no change in weight.

I would have thought that a stock would give at least one point in recoil compensation.

And then you add the rubber butt.

At this point, a full stock would be 4.375 starbux, and eighty grammes. 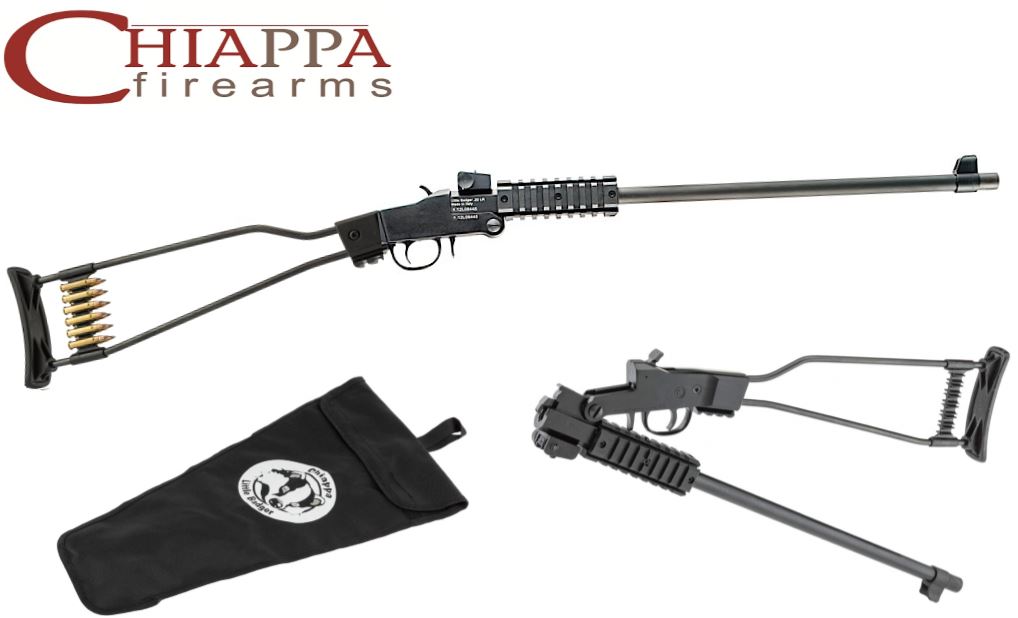 Condottiere said:
So the stock and the barrel are each dependent on the final receiver cost and weight.

Single shot option is one fourth cheaper than default, but no change in weight.

I would have thought that a stock would give at least one point in recoil compensation.

And then you add the rubber butt.

At this point, a full stock would be 4.375 starbux, and eighty grammes.

That seems about as cheap as you can make a rifle with a viable performance. You could make it lighter, but that makes it more expensive.

If you go by Traveller costs, you're still stuck with a default forty centimes per round, but this would be the sort of firearm you could give to a child, since an air gun appears to have an ammunition cost of one starbux, weighs four to five kilogrammes, and costs four to six times as much.

The silent part probably could be handled by a suppressor.
C

If, however, you double the amount you're willing to invest in, one hundred and twenty two and a half starbux, you could switch the single shot for a repeater.

There's no extra weight, and you can at least have access to the internal magazine, which by it's nature is fixed.

The capacity is a modified thirty six for light rifle, which is halved for repeater, so eighteen. 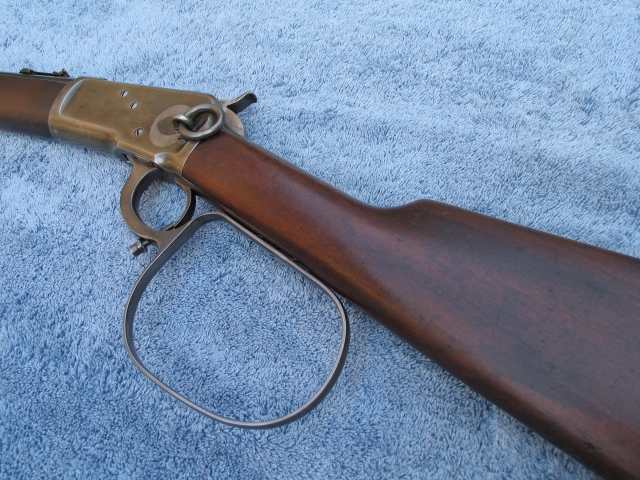 Westerns were popular when the television show The Rifleman premiered in 1958, and producers tried to find gimmicks to distinguish one show from another. The Rifleman's gimmick was a modified Winchester Model 1892 rifle, with a large ring lever drilled and tapped for a set screw. The lever design allowed him to cock the rifle by spinning it around his hand. In addition, the screw could be positioned to depress the trigger every time he worked the lever, allowing for rapid fire, emptying the magazine in under five seconds during the opening credits.

The trigger-trip screw pin was used in two configurations: with the screw head turned inside (close to the trigger), or more often, outside the trigger guard with a locknut on the outside (to secure its position). In some episodes, the screw was removed when rapid-fire action was not required. When properly adjusted, the screw pulled the trigger when the lever was fully closed. The rapid-fire mechanism was originally designed to keep the program's star, Chuck Connors, from puncturing his finger with the trigger as he quickly cycled the action of the rifle.[citation needed] With this modification, Connors pulling the trigger for each shot was not necessary, so he did not have to place his finger in harm's way.

Possibly the cheapest generic rifle in the galaxy.

If it's supposed to be six inches, the length would extend to fifteen inches.
C

Assault - the problem with assault, six to nine inch barrel, is that you drop down to one dice of damage; the fifty percent drop in range doesn't matter. If special ammunition is used to increase damage, maybe. You can, though, draw quicker.

Carbine - a fifth shorter barrel, minus one to damage, and a reduction of cost by one sixth and range by one tenth, it's within the bounds of viability.

Long - barrel would be fifteen to twenty two and a half inches, fifty percent heavier than the rifle variant, and two thirds more expensive; I'll go with the assumption that light rifle is a high velocity round, so range is increased by ten percent, and adds plus one to a scoped attack roll.

Very long - double the length of a normal rifle barrel, so twenty to thirty inches; range is increased by twenty five percent, and scoped attack plus two.

Length is pretty dependent on the norms and ratios being correct; a very long variant at twenty inches with an extreme range of seven hundred fifty metres seems okay.
C

Possibly the cheapest, effective, generic rifle in the galaxy.

The only real difference would be the recoil, which with one extra damage dice versus handgun recoil compensation, would make that minus one instead of carbon neutral.

Assault - with assault, six to nine inch barrel, is you drop down to one dice of damage, which at two dice is tolerable; the fifty percent drop in range doesn't matter; draw quicker.

Handgun - basically covers territory already presented by the Crewmate, with two dice, minus one on penetration, and a range of fifty metres, which works out as a survival gun, to an extreme range of two hundred metres, which if non stressed, you can hit over iron sights. Problem is recoil of one, so perhaps a gun for a more experienced user.
C

Possibly the cheapest, effective, useful, generic rifle in the galaxy.

I suddenly made the realization.

Repeater doesn't require the magazine to be either integrally internal, nor fixed.

Whether that's the intent of the author, who knows?

Decreasing, or increasing the capacity seemed obvious, and a matter of cost and weight adjustments.

However, if the magazine isn't fixed, then it could be variable, and removable.
C

I remember reading that the Winchester could be considered the first assault rifle, but post Civil War doctrinal decisions prevented general adoption of repeating rifles, or in this case, carbines.

The tools were there, assuming you could manoeuvre a Gatling, or two, into position, though the next generation of heavy machine guns would seem to resolve that.

I think rifled musketry overshadowed weight of firepower, and logistics, in that quartermasters had to consider how much ammunition troops could drag along, and could be resupplied with. And apparently, cartridges aren't cheap.

A little gimmickry could make the lever action increase the rate of fire.

In terms of culture, once humanity headed out to the stars, I tend to think the ArmaLite would be the most likely choice for pioneers and settlers, so would be the most iconic gun that would be remembered from this period of expansion, compounded by the fact that thirty five centuries later, it's still pretty effective as at a minimum, paramilitary weapon, relatively cheap compared to alternatives, and lends itself to a great deal of customization.

The Clash, would have represented a frozen design, with a semi/full automatic mechanism, so lever action doesn't fit in that aesthetic, nor originating era, or even geographic area.

On the other hand, at technological level five, a Winchester wouldn't even be considered close to a paramilitary weapon, and if you can keep most combat ranged, using the same cartridge, isn't going to make that much of a difference against assault rifles, and against the default, could outrange them.

As regards the handgun receiver, you trade cost against increased recoil.


And weight: considering how dependent the furniture is on the receiver, I think the end result would be pretty skeletal.
Last edited: Jul 20, 2022

I'm new to this rather long thread. Sorry if this have already been covered, I haven't finished reading all the posts.

I've been checking the T20 Solomani ships. The Prometheus dreadnaught is awfully underarmored. Its armor represent 4% of internal volume (USP3, the first point cost is doubled), thus around AV5 for MgT2ed. For a ship supposed to slug it out with the Imperial heavies, this seems low (but would explain the losses during the war).

I know that the different editions don't have the same shipbuilding rules, but when trying to recreate the Prometheus, I end up with enough free space to give it AV12 and still have 1k dT of cargo (the T20 ship have only 130 dT). Also with MgT2ed, I end up with a crew of 4803 + 750 troops.
By making the ship purify its fuel in 24h instead of 6h, you can have AV14 & over 12kdT of cargo (or other systems). Since the ship isn't using all its hardpoints you can add more weapons.
The Meson gun used by the Prometheus in T20 is only 3500dT, MgT2ed is 7500dT for 2DD (minimum size). The above example is using a 4DD Meson Spinal, reducing it to 2DD would free even more space.
C

1. The Prometheus class would require an extensive rewriting to bring it up to code.

2. The antebellum Confederation Navy seemed to have a preference for the Star Destroyer aesthetic.

3. Being streamlined, regassing is probably easier and faster.

4. It's implied that the Confederation Navy had only three classes of, ah, line of battle ships, each being an improvement of the previous class, the first two being termed battlecruisers.

5. The end result was the Prometheus class fast dreadnought, that has no real life equivalent, with the possible exception of the Queen Elizabeths.

6. Presumably, if one met an Imperium battleship, technological level fourteen, it would have kicked it's ass, being twenty five percent larger.

7. If there is a real life comparison, it might be with the German Panther tank.
You must log in or register to reply here.