My players are thinking about rescuing some pirates from the nasty Imperials (Drinax: The Game of Sun & Shadow) and so naturally I thought I'd better familiarise myself with the deck plans just in case there's a boarding action of some sort.

Looking at the picture it's clear that the Galoof is an odd shape; taller that it is wide by a considerable margin. Here's a pic. 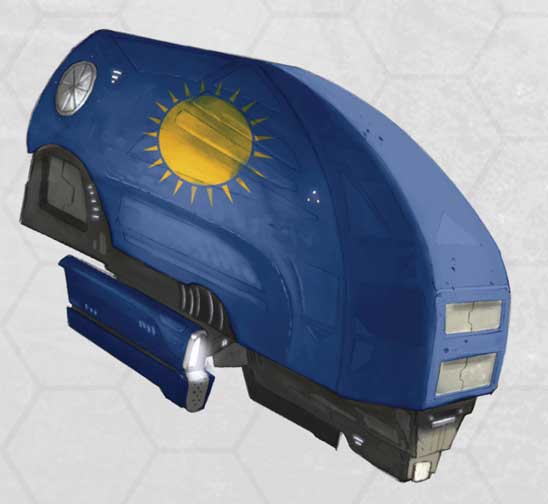 So the deck plans are not right given the picture provided - even if I just change the scale of the deck plans to fit the tonnage the ship is still flatter than it is wide. I thought I'd have a go and some better plan dimensions.

I will assume that the picture is correct. In the The Game of Sun & Shadow adventure the megafreighter (as shown in the picture) is "... a standard megafreighter – her crew section sits like a little bubble atop gargantuan fuel tanks, titanic jump drives, and a mountain of 2,000-dton cargo containers". The picture seems to suggest otherwise. The top massive superstructure looks like the cargo, with the non cargo lumped underneath (and ignoring the drives out the sides).

I'm really only interested in the crew areas, and maybe the docking areas. The rest of the ship is massive (the cargo bay must be cavernous if it can hold multiple pirate ships in nets) and I can just pick random corridors or engineering bay corners if anyone goes outside the crew areas. So with that in mind, and looking at the picture, the bridge and crew areas are probably at the front with the shuttles using the large door at the bottom of the nose. The crew areas look to be about 30m wide and the shuttle area about 21 m. The height might be 15m for shuttles and 18m for crew areas (all nicely divisible by 3 for deck planning purposes).

The shuttle bay volume is therefore very approximately 21m x 15m x 42m deep = 13,230 m3 or 980 tons. That's about right, and well within the 10% margin or error for deck plans. (Waving hands about the shuttle having a 30m wingspan - perhaps they fold up?). I'll make it a shuttle clothesline with each just having enough space to dock into it's spot. Or like bread in a toaster or something.

(Note: I've been working this out as I go along writing this post. It's been quite organic in that regard, and I've just remembered something cool. I'll explain in the next paragraph).

I'm very very impressed with the Starship Geomorphs from Robert Pearce's "Yet Another Traveller Blog" (http://travellerrpgblog.blogspot.com/). He's released many in a PDF form and there are all kinds of interconnecting deck plans. Each is 30m x 30m (except the 15x30 and 15x15 ones for edges and corners) which is perfect. I've just solved the deck plan problem. I can use six geomorph deck plans for the crew portions of the Galoof - I just need to pick a Bridge one and five others with staterooms and common areas and there's the Galoof deck plans sorted out. I might tinker with the edges (there won''t be doors opening to space) but it's close enough.

I just realised I included cargo cranes in my crew tonnage calculations. Never mind. I’ll use some Geomorphs with a little bit of engineering in.
O

Diving too deeply into deck plans can lead to disapoinntment. Lol. Deck plans are really hard to do well. I love Robert Pearce’s geomorphs. I’ve grabbed a section here or there for combat a couple of times.

As for the Galoof, look at the two biggest cargo decks in the middle. At 42 x 20, ignoring a little narrowing at the front, those bad boys are 10,500 dtons each. The grid says it is 7.5 meters to a square, and that one square = 5 tons. Uh, no. Even at a deck height of only 3 meters, which is a bit odd for a mega-freighter, 7.5m square is 12 tons (168 cubic meters). And as you mentioned, its cargo bays should have much greater height. So the ship as drawn is much larger than 30,000 tons. You can fix that by correcting the scale, but I dont know if thst translates to the drives, etc.

So I agree that just grabbing some appropriate sized geomorphs is the answer. Ignoring the scaling issue, the deck plan isn’t detailed enough to be useable for personal combat anyway. Good luck.

Love your blog posts by the way. Have gotten inspiration from them more than once.
A

a semi-related question: does anyone else interpret the three cargo decks as a single triple-height deck? The top one is the only one with cargo cranes, and the bottom deck has loading belts.
K

At this time I’m thinking the cargo space is a single vast space that’s 150m long by 40m wide by about 30-50m high. I would also assume there are fold down racks of enormous size along the sides or other transformable solutions (nets? gravitas roped?) to hold or stack cargo containers. I think 2000dton ones are mentioned. The cargo cranes would be on the roof or rails high up and belts low down.

So I think the difference is that I have resized the decks to have more vertical space.
C

Yes, I terpret it as one high deck for the same reason.

Kulthea, I think your estimate roughly matches the picture, so run with that. Not that you really need the cargo deck to be right for a boarding action (although it could be fun in zero-g, and people could be hiding in the captured ships).

Let us know how the boarding action goes. I also noticed that book one lists the crew as 40 plus marines, whereas book three has a standard crew of 165. Whatever. Bigger ships should get some serious scale with crew, so I like the optional rule of cutting the engineers by 1/3 on capital sized ships.

Based on your interest in deckplans, I’m guessing they actually plan to board and subdue the crew the old fashioned way rather just kill everyone with radiation first.
K

It is fair to say that radiation has been a go-to tactic. Those pesky marines in their battle dress refuse to roll over quite as quickly though. And radiation won’t be possible (if they want the prisoners to survive) on the liner.

I hadn’t gotten to the crew numbers yet. I might recreate the Gsloof in the ship generator and check civilian vs military numbers. Navy might over crew it.

Not sure if they’re going to do the boarding as a pc scenario or if they’ll send across their marines and we roll it out on the boarding actions tables. I’d rather be prepared though.
O

Glad to know my travellers aren’t the only ones building personal military forces.

Staff member
Quick note here regarding vertical height on this ship - we don't include the fuel decks in the plans (because they are pretty boring to look at, and just what the hell are Travellers doing traipsing inside one of those...). They are factored into the design but not drawn.
K

msprange said:
Quick note here regarding vertical height on this ship - we don't include the fuel decks in the plans (because they are pretty boring to look at, and just what the hell are Travellers doing traipsing inside one of those...). They are factored into the design but not drawn.
Click to expand...

I appreciate that. That's what I normally assume is the case, and it makes a lot of sense. However I still think there's a problem with the Galoof plans for the reasons given. :lol:

FWIW deck 1 of the Galoof is my favorite deck plan in all of Traveller. :wink:
S

If you take an ink and print-head cartridge from an inkjet printer, and apply some artistic license like the protagonist of Our Man in Havana, you get this starship.

(I hope someone else reading this has seen the movie and gets what I mean. If not, go see it for some great spy story laughs. I haven't read the novel, but it's probably good fun too.)
You must log in or register to reply here.

J
Element Class Cruisers - Food Preparation (where does it happen?)