hoho thanks for that Condotierre!

That would certainly make things a lot easier for this ship per the original post.
C

FYI skimming through more of Mercenary I just ran across their 20 ton "PECAH BREACHER SHUTTLE" which is very similar to this 10 ton skiff.

So I guess either the same error was made on the Solomani front OR mongoose has purposefully made a stealth rules change on minimum fuel tankage requirements ;-)
C

High value is more a matter of cost benefit analysis.

You're paying for their bed and board, as well as limited transport capacity, to place them in the correct spot at the correct time.

Garrisoning is easier to rationalize.

Agreed.
I could see the 20 ton shuttle being used by larger ships with better trained and equipped marines (better merc outfits and imperial navy).

Whereas the smaller skiff would be used by smaller ships with lesser trained and equipped marines (pirates and the like).

Actually, fractional is not disallowed.


High Guard said:
Other power plants require fuel tankage equal to 10% of their size (rounding up, minimum 1 ton). This provides enough fuel for the power plant for a month (four weeks).
Click to expand...

Doesn't say anything about fractional not allowed, just the minimum is 1 ton and it gets rounded up for 4 weeks of operation, and that is just for non chemical power plants.
C

In the context of any game rules, isn't that contradictory? 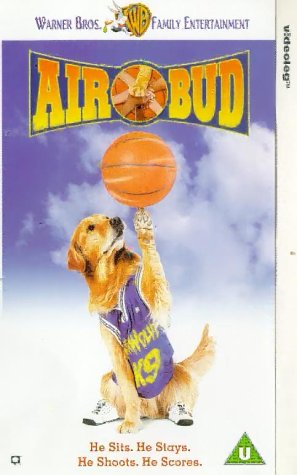 What is the Air Bud rule?

This comic is a direct reference to the film Air Bud. In the film, a golden retriever becomes the star player on a basketball team. ... Because rulebooks are considered the final arbiter of decisions in most sports, Ponytail suggests that, since it isn't explicitly prohibited, her team is allowed to kill and eat the dog.

AndrewW said:
Doesn't say anything about fractional not allowed, just the minimum is 1 ton and it gets rounded up for 4 weeks of operation, and that is just for non chemical power plants.
Click to expand...

I read the above as fuel tankage "must be at least 1 ton".

However the two ships in Mercenary and Solomani rim I note have fuel tankage of 0.2 tons and 0.05 tons respectively.

One tenth of a tonne is a hundred kilogrammes per month, or default thirty days, or 138.88 grammes per hour, or if I read the calculator correctly, a tad under two litres. 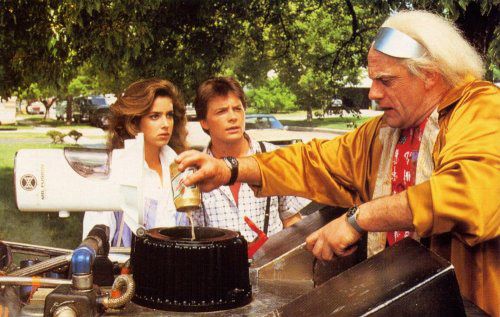 Condottiere said:
or if I read the calculator correctly, a tad under two litres.

Reply to the OP.

What they've told me is this:
When conducting a boarding that may turn hostile, you want to project as much force as necessary to subvert any thought of resistance. You also want to bring along enough 'technical' people to deal whatever issues are immediately necessary [a medic, someone who can con the vessel if arrests are made, etc.]. You want to be distant, professional, and authoritative in all aspects. It is best if you have an officer with you, but that's often not possible.

So, in a Traveller sense what this means to me is:
-- First off, I'm assuming we're talking about a possibly hostile target vessel, not a routine customs inspection.
-- Who will be conducting your boarding operation? Mercenaries in augmented vacc suits or Imperial Marines in Battle Dress?
-- If the target vessel has hove-to but is still capable of maneuvering, you don't want to do a hull-to-hull contact. Your boarding party would most likely EVA over to the target vessel's airlock under the guns of your mother ship. Only when the situation is secured do you risk a boat going airlock-to-airlock. You NEVER risk a ship-to-ship attachment.

All this leads me to think that a boarding shuttle needs to be much larger than the 20-ton gigs we see being squeezed into 'Adventurer'-class ships. I would put the minimum size for a purpose-built boarding shuttle at 50 tons give or take, and would generally err on the side of larger rather than smaller. The logic here is that a 'squad' of troops in Battle Dress takes up a lot space.
I would provide large hatches for armored troops to exit the craft quickly. If you're including a boarding tube, that tube will also need to be pretty large to accommodate the bulk of boarding troops.
I would include an auto-doc for casualties.
I would include a point defense array for when the bad guy decides to be stupid.
I would lightly armor the boat for the same reason.
B

ottarrus said:
Reply to the OP.

I get this from two Marines, a US Marine in the Fleet Marine Force and a Royal Marine Commando who both did hostile boardings in the Persian Gulf.
My personal experience is US Army, and I'm deferring to their experiences on this one.
Click to expand...

Ive also trained for Boarding Ops and totally concur, the new Boarding Rules in the Mercenary Specialist Forces certainly favour Free Boarding by individuals rather than docking with any other craft.
Defending ships if still maneuvering can tumble and with a successful check prevent docking altogether. Also unless you have a Breaching Tube to make your own Breach trying to enter through a defended airlock is tantamount to suicide if the defenders are well armed.

The Boarding rules in MSF could have been written clearer and edited better though some of the DMs are wrong giving - instead of + etc.

Basically if a ship fears being Boarded it can: (this my summary from the descriptive text.)
To Enter an Effective Tumble to try to prevent Boarding attempts requires D3 Rounds, during which the Pilot may not maneuver in any other way, and a Routine Pilot Check 6+. (During these rounds no DM is mentioned for Docking Attempts) Can Maneuver as normal afterwards.
Check Failed. Ship in Inconvenient Rotation. DM-1 to all Docking and Free Boarding Attempts.
Check Passed. Ship is in Effective Tumble. DOCKING is NOT possible, Free Boarding only. See Pg 114 for DMs.
Does not say the defending Pilot can not try again.

So any ship that fears being Boarded would try to enter a Tumble as a matter of course.

Success means docked obviously with a Breaching Tube anywhere if no BT then at the defenders airlock which is still and must be forced/cut open.

If the Either ship then tries to break docking or uses Thrust at all that is not matched by the other ship: Average Initiating Pilot Difficulty Check 8+
Dm+1 for each Thrust point in use, DM-6 if Forced Linkage in use,
Reacting Pilot may make an Average 8+ Pilot check to counter the break away with the effect of their check used as a DM to the break away attempt.

If the ship breaks away each vessel takes D3 damage for each point of negative skill effect of Reacting Pilots failed counter check and any engaged Airlocks outer doors are damaged and open to Vacuum.

So any Boarding vessel really requires Forced Linkage and a Breaching Tube. So Docking with a ship that doesnt want the connection, remaining attached with out Forced Linkage is very difficult.

The epdf High Guard Deployment Shuttle is 50tons and designed for Boarding Ops but even that describes tactics of multiple "attempted" feint Breaches with the Breaching Tubes and Individual Marines making other breaches through the Hull. Adding a FL to this Shuttle would be advantageous. But in the pdf the BT is used more as a distraction to confuse the defenders rather than as a means of Boarding.

Thats why ships are usually only Boarded when they realise resistance is futile because they are outgunned or their drives are shot out. And the Boarding Forces have a ton of Fire Support. Most Pirates Board with the victim ship being cooperative because of threat.

So basically Hostile Boarding Actions are High Risk/Dangerous Operations in which you want to stack all the cards in your favours. Docking with a still manoeuvring ship would be a last resort op, only attempted if the ship couldn't be fired on for example Hostage Rescue. Still then if the defending ship had weapons its going to be extremely difficult and you would need multiple coordinating Boarding Teams.

(I as a GM would not allow Jumpbreaker Missiles to be detonated on the nose of a craft I know RAW says they do no damage but thats shipscale damage. See The Companion for gravity effects on crews in combat aboard ships. If such an action was attempted I would probably draw up some fluctuating Gravity effect chart to see what happens to the crew using the Companion Gravity rules as a guide.)
C

i moved the tumbling rules discussion to a separate thread.

all good ideas above, thanks!

I was excited to keep reading the rest of the boarding section in Mercenary, it goes into far more detail than core or HG.

There is a bunch more boarding equipment in Mercenary that would enable a boarding skiff like this to engage in both direct docking and sending marines across via "Free Boarding".

With equipment to force open airlocks and cut holes in 'locks or ship plating it's all just a matter of time now.

The skiff's complement of 10 marines could easily split up with 4 staying onboard to force open the 'lock they manage to dock with via a 'lock bot and the remaining 6 heading out the back hatch for a free boarding attempt with a hullcutter. Or any combo of the above.

the jump breaker warhead could be rigged to the FLA. Once the cable connect to the target ship the warhead is slid down the cables to impact on the 'lock of the target vessel.

if you still don't think that's reasonable could replace the turret with a missile launcher on a firmpoint and shoot the target vessel at point blank as you approach.

The Remora boarding skiff is a tiny 10 ton vessel designed to fit in standard 10 ton docks, such as those that would normally carry light fighters or a shuttle.

Well armored, it is designed to carry 10 marines to a target ship and force boarding either via an airlock or directly at a point on the target's hull.

A Type 1 Docking Clamp fitted at the rear permits additional skiffs to quickly and securely dock with a skiff that is already attached, enabling additional marines to quickly exploit an existing breach.

The missile launcher fitted to the firmpoint is typically loaded with 4 Jumpbreaker missiles (included in purchase cost of ship) to stop/ delay the escape of a target vessel. 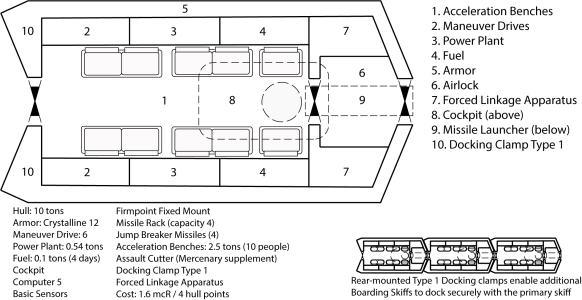