Staff member
The latest tome for 2300AD has now arrived - Ships of the Frontier!

You can grab your own copy right here: https://www.mongoosepublishing.com/products/ships-of-the-frontier 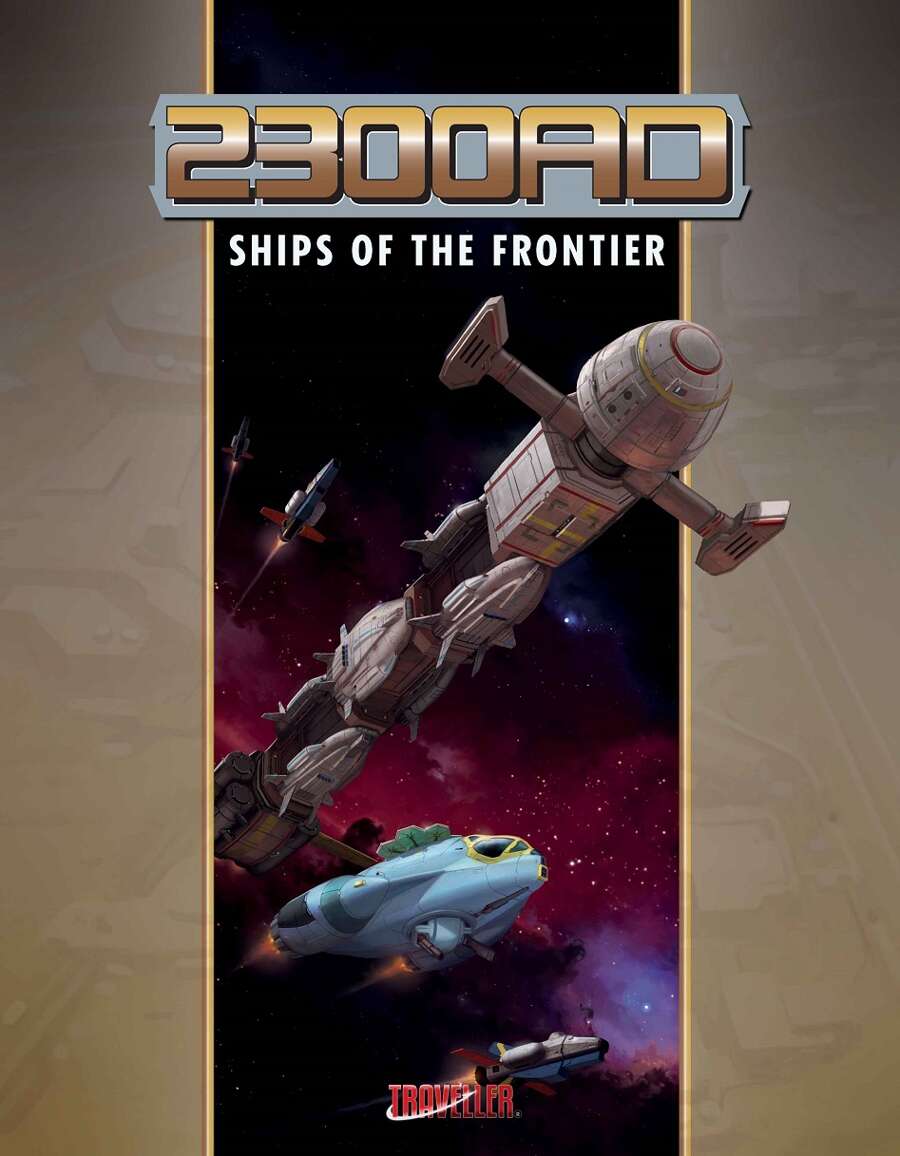 The 33 colony worlds and countless outposts of human space are scattered across a 100 light-year diameter volume of space, along three intricate and complex Arms of stars and anchorages that allow starships to hop from star to star, 7.7 light-years at a time.

This book contains many drones, fighters, freighters, landers and warships from across human space, along with a selection of ships used by the three space-faring alien species at the edge of Human space: the Pteranodon-like Sung; the odd little biotech masters, the Pentapods; and the hulking, vaguely-insectoid Kaefers, unrelentingly-hostile and bent on conquest.

The 81 ships, drones, and stations in this volume build on the ships presented in 2300AD, and add new opportunities for trade, diplomacy, exploration, and combat.
F

Pg. 85 the Gustav class fighter. The classic Gustav had a double EA-1000 Mount and a single LHH-637 submunition dispenser and everything has UTES. Course I’ve heard the classic GDW Gustav was also designed with no fuel tank so YMMV…

Now the Gustav in this book (SotF) has stats indicating a single EA-1000 and two LHH-637…which I’d be fine with…but the power figures on page 85 (weapons power 25) are more appropriate for twin laser arrays. The EA-1000 has power 10 from AEH pg 66 and each submunition dispenser has power 1 per AEH pg 137.

It's worth noting at this point that in vanilla GDW Star Cruiser a double mount didn't do double damage. Double mounts increased the to-hit chance. Whenever I designed a ship I assumed this also meant doubling the weapon mass and mount power draw (after you included the errata ... which told you that multi-light second space-to-space lasers actually drew power...who knew?).

I can’t make the SotF Gustav power figures work in other ways too. Like the Gustav’s advanced military sensors should require power 20 per the table on AEH pg. 30 but Gustav Power stat block on pg 85 of SotF says 10. Course the sensor examples in AEH (Jian and Kennedy) both halve the power value from the military sensor table in the same book. So maybe I’m missing something.

feld said:
Pg. 85 the Gustav class fighter. The classic Gustav had a double EA-1000 Mount and a single LHH-637 submunition dispenser and everything has UTES. Course I’ve heard the classic GDW Gustav was also designed with no fuel tank so YMMV…
Click to expand...

The Gustav had a 4 MW power plant, and indeed had to "all stop" and divert power to lasers. The original rule was all weapons drew 1 MW, which was later corrected so x2 lasers drew 2 MW. PBWS should be much more efficient, and IMHO should be left at 1 MW per weapon.

The mass listed was unfueled, but the Gustav fuel tankage was given in "Lone Wolf" ISTR. She's simply a bit slower.

Have you looked at the deckplans? Are they like the Kennedy, where the deckplans are for a much larger ship (1,250 dTons) than the writeup? Indications are the Richelieu is like that.

Stunning supplement, there is so much to admire.

The artwork, the deckplans, the variety of craft on offer.

Well done to all involved
F

I must agree that the book is a good one!
Love a lot of the new color art.

I do however ... have errata...Gustav's always been a favorite of mine from the GDW days and it's on the cover so let's start there. Don't let the wall of text detract from what I said above. Loving the book.


Bryn the 2300AD guy said:
Have you looked at the deckplans? Are they like the Kennedy, where the deckplans are for a much larger ship (1,250 dTons) than the writeup? Indications are the Richelieu is like that.
Click to expand...

Thanks for the answers.

RE: plans. It's very hard to compare the GDW and Mongoose design systems since the former tracked actual mass (not volume) and surface area and the new one tracks just volume.

I'm not entirely sure if I've answered your questions here but I have looked at the plans and they seem a bit spacious vs. both the old and new art of the Gustav. In both the old and new art it looks very much like the forward cockpit is a single seat location. I think the Gustav has always had a life support capacity of 2 so I've always assumed it had a crew of two (pilot and gunner/remote vehicle operator). From the old art I'd always assumed that the second crewperson was in the main spacecraft body. (Bryn thank you for posting those excellent pictures to your website). 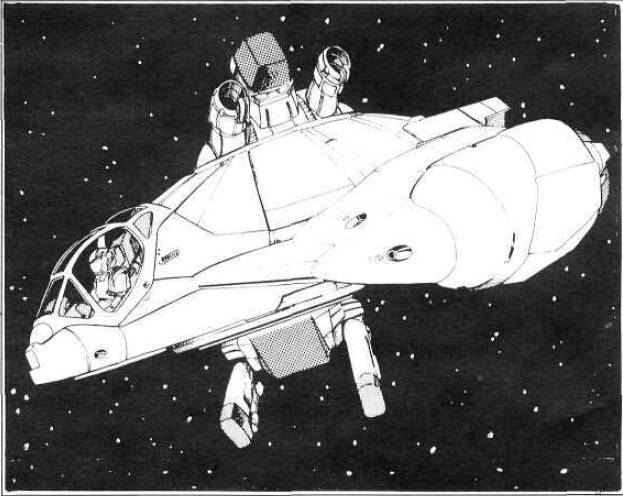 The Ships of the Frontier (SotF) deck plan appears to have the second crewperson sitting behind and to the right of the pilot. The crew compartment in the "nose" is a lot wider than I would've expected. Furthermore the SotF Gustav (as I mentioned above) has twin LHH-637's where the original had only one. That certainly implies a larger (by 2.7 dtons) spacecraft than the GDW Gustav was.

Other notes on the SotF Gustav deckplans (positives and ... oddities):
-I appreciate the fact that each system is laid out clearly as "blocks" of the appropriate number of dtons as a newbie learning the Mongoose Traveller 2300AD spacecraft design system as described in the Aerospace Engineer's Handbook (AEH).
-they appear to put the EA-1000 and twin LH-637's on separate "decks"
-They powerplant, stutterwarp, and reaction drives are all in a block in the back that does not have an apparent door to the crew spaces. I think this is fine from a real world engineering standpoint but it might be confusing to someone used to standard SF RPG deckplans where it's basically like any dungeon floor plan.
-The components in that block are NOT laid out in a believable way either with respect to real world or previously established 2300AD aerospace engineering. The stutterwarp is mounted athwartships. The reaction drive is all off on the starboard side when it is very clear in the drawings that the two big pods on the wings are those drives. As a practicing real world aerospace engineer I would've laid these out very differently.
-The radiators don't appear to be quite sized right. They are ADHR's, "capacity 50", and so should be 5% of power capacity in dtons. They're not oversized so that's 50*0.05 = 2.5 dtons. Listed value on the SotF Gustav ship sheet (pg86) is 2.25 dtons.
-SotF pg 86 says Gustav has a dual cockpit, neural link, and encrypted comms for a total of 1.0225 MLv. AEH pgs. 25, 26, and 33 lists the cost of a dual cockpit, neural link, and encrypted comms at 0.15 MLv, 50% bridge cost, and 0.05 MLv respectively which works out to 0.275 MLv if I did my math right. SO that's a fair bit of difference.
-Think I already mentioned that the power table looks wrong: the AEH pg. 30 says advanced military sensors consume 20 power ... but the Gustav's sensor power budget on SotF pg 85 is 10. Now...this might be an error in the AEH table because the Jian and Kennedy examples in that book (see AEH pg. 34) show power for the Basic Military and Very Advanced Military sensor suites as half the values on pg. 30. And if I halve the power of the Advanced Military Sensor it comes out to 10. The drone military sensor table on page 134 lists the halved power values and the text states that 'these sensor systems are equivalent in capability to standard ships systems" so I guess the table at pg 30 is wrong.
-SotF Gustav EA-1000 tonnage seems wrong. Per AEH the retractable fixed mount EA-1000 listed on the ship sheet should mass 2 dtons (0 for the fixed mount + 1 for the laser itself x2 for the retractable feature). That's the weapon tonnage listed on the table. But it's also listed as having a UTES which should up the tonnage by 1 dton for a total of 3 dtons. Frankly, with the fact that 2300AD has finally realized that lasers with ranges in light-seconds require large focal areas I would have put the UTES on the LH-637s but I'm not going to quibble. The UTES on the EA-1000 could just use a lidar associated with the same focal mirror the artist has put on the revised Gustav's dorsal surface.
-Another problem with the Gustav's EA-1000 mount: both the old art (see above) and new art seem to indicate that the dorsal EA-1000 mount should be a retractable turret vice a fixed mount. However AEH pg. 65 says that fighters (<50 tons) can only mount weapons in fixed mounts so I guess that's that.
-The SotF Gustav design violates AEH pg. 65 where it says that a Fighter (<50 tons), "can also deploy up to 5 dtons of submunitions dispensers." The SotF mounts 5.4 dtons.
-The SotF Gustav weapon power seems wrong. I think it should be Power 10 (1xEA-1000) + 5 (UTES) + 2 (2xLH-637) = 17 Power. Listed Weapon Power is 25.
-Is there a way to make submunition launcher's retractable? The ventral LH-637's certainly should be but I'm not seeing any way in the AEH to do that.
-Presumably the LH-637's are using the EA-1000's UTES but that's not stated.

I'm gonna stop there because hopefully I've answered Bryn's question a little and gotten some of my own errata out of the way.

Is this kind of detailed blow-by-blow useful to the community or the publisher? I'm (slowly) going thru the book as a learning exercise ... if these kind of notes are useful I'll post them here.

A post of Colin's on the facebook group says that the ships in this book were done over a year ago, with an old version of his design system. The ships can't be made with the current AEH ruleset.

Staff member
Just to let you all know, the file for this has been updated - simply download again (from our site or Drivethru, wherever you picked it up) and you will have the latest version!
F

That's awesome but it looks like the new PDF version omits the beautiful cover! Was that intentional?

Thank you for uploading a new SotF with the covers!

Staff member
Look what has just been delivered

Our production copy of the Traveller 2300AD - Ships of the Frontier, has just arrived and it looks amazing!
This book contains drones, fighters, freighters, landers and warships, along with ships used by alien species at the edge of human space.
Have you pre-ordered your copy yet? https://www.mongoosepublishing.com/...ontier?_pos=1&_psq=ships+of+the+&_ss=e&_v=1.0