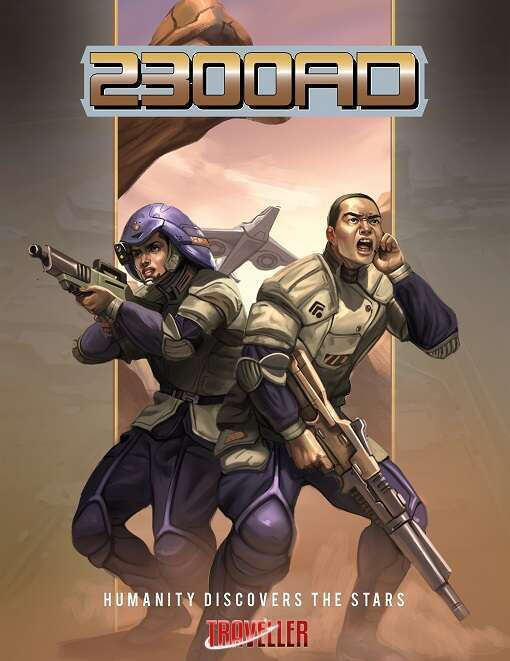 What organisations do each of the three armed forces personnel belong to in the illustration on page 82 of Book 2?

My guess is (from left to right): US Marine Corps, RCMP, Ukrainian (or German).

Any news on the release of the updated PDFs?

GunbunnyFuFu said:
Any news on the release of the updated PDFs?
Click to expand...

We are just tying the last bits up, hoping to have them all with you this week!

Hopefully it comes out this week!

I note that the PDF file on Drivethrurpg has just been updated. Does this mean that things have been added?

My downloads are on this site, as I bought the pre-order package. Is this file going to be updated soon also?

TrippyHippy said:
My downloads are on this site, as I bought the pre-order package. Is this file going to be updated soon also?
Click to expand...

It will indeed, we will make an announcement just as soon as our tech guys have updated the file!
2

Looking forward to this update.

OK. I'm going to ask a question that may be...a bit abrasive. I'm sorry if it comes across that way, but I would like to know the reasoning behind it. So...August 20th rolls around and dozens of loyal fans buy the boxed set directly from Mongoose. Great! Then the time comes for the fixed PDF to be released, and it's released to DriveThru first, and we're still waiting for it on the publisher's website? Again, sorry if it's abrasive, but I am more than a little disgruntled because I chose to support the publisher, and am now waiting several hours for the updated release, while those in my group who bought on DTRPG have the updated version. Next time, should I take my business to DTRPG, where Mongoose gets a huge chunk of money taken off, and not worry about pre-ordering the boxed set, and just get it on Amazon a couple of days after it's released? I am genuinely confused on why Mongoose didn't update their own site first...

Staff member
Not an unreasonable question.

The answer is that we finished these changes at very much the 11th hour on a Friday evening. We can update DTRPG ourselves, but we need one person to do one little thing on our own web site to enable the new file. There is every chance this may happen over the weekend, but will certainly take place near start of business Monday.

We are in the midst of building a new web site where this (and many, many other idiosyncrasies) do not happen, which we hope will be up and running by the end of the year.

So, we had the files ready but do not have a perfect system on our own web site. We could have withheld the files, but we figured that would do no one any good especially if our tech guys see our request over the weekend.

Thank you for the response and honesty. While it's certainly not what I wanted to hear (delay up to Monday), it is what it is. It's one of those things that will color my purchasing decisions on PDFs in the future (whether I need that new shiny PDF right now, or can I potentially wait a couple more days for it to show up on the Mongoose website), at least until your new website goes live (which I hope it does soon!). Being heavily invested in the technology field myself, I understand what it's like to be held back by older technology, though I've never dealt with it on an e-commerce scale. I can only imagine how frustrating it is.

Again, thanks for the response. I am looking forward to more 2300Ad stuff from Mongoose in the future!

It’s the way I process decisions now already, for the most part.

If I really want the physical product, I buy into preorder on the Mongoose site. If I’m not sure, I just buy the PDF - usually from drivethrurpg.

Of course this can make things a bit more expensive if I choose to buy the physical product later, but I offset that will the notion that I am spending more time to check over a budget, which I try to keep to on RPG products.

While having the corrected PDF arrive a few days earlier on drivethrurpg is not ideal, it isn’t really that significant in the great scheme of things to me. I mean, I won’t get a chance to play it till next year anyway as I am playing other games, and really won’t fully get into it till the box arrives.

For me, it is certainly unlikely that I'll ever really use the boxed set, other than reading. Most of my games are online these days (And thank you to Matt and crew for giving full support to some VTTs!). Now, if I had Mongoose 2300AD in my life say....20 years ago (during the reign of the GDW 2300 AD), things would be much, much different as I had a group that played face to face all the time. Sadly, as life progressed we grew apart and moved apart. It was the thought of MGT2E 2300AD that sort of sparked the reinterest in the setting. We homebrewed our own based on the 1E release with the 2E rules while waiting for the release of the 2E boxed set. During that time, I really began driving to have 2300AD put into my VTT of choice at the time (Fantasy Grounds). Mongoose Trav1E was already there, and as 2300 AD was released for MGT1E, it was a wish to see it released on that platform. Sadly, that never happened. 2E was released almost immediately, and we began frankensteining 1E stuff into 2E. So...when 2300AD 2E was released, and I began to help put it into Fantasy Grounds, I was excited....and then the issues with the Core Rules popped up. And my players wanted to play characters from the Core Worlds.....so....although they've agreed to make Frontier characters (since that was all that was available), we've started running the campaign on VTT. So...long story short, the boxed set won't likely ever come up in face to face play, but it will look good sitting on my bookshelf, and I can certainly pour over the Starmap as I plot out all sorts of deviousness for my player's characters.

I was certainly disappointed when those who purchased the physical boxed set through Mongoose didn't get the update, but in the grand scheme of things, a few extra days certainly won't kill me. It was more confusion of why they didn't release the updated rules to those dedicated fans who shelled out $$$ or Euros or whatever to buy the boxed set to support Mongoose, but that's been explained. I will likely start going the DTRPG route...I know of at least one game company *cough cough* Onxy Path *cough cough* who when you buy the physical book just gives you a coupon for DriveThru..that way, it only requires them to update DTRPG, and not have to maintain PDFs at two separate sites.

I can certainly understand the notion that you spend more time to check over a budget...Much to my dismay, my own RPG budget often gets wrecked, to my wife's dismay. Thankfully she's a gamer, so she understands, most of the time...though it's harder to do so when it comes to Sci-Fi games. I usually get *that look*

Hopefully, all goes well with the tech today! Looking forward to seeing what Colin has come up with!

Staff member
Just to let you all know, the files for 2300AD have been updated - if you simply re-download them you will have the very latest version. We have taken all of your comments on board and, in addition to a great many other things, have added another 8 pages to include Traveller creation for those from the Core!
R

These look much improved, thank you.

Thank you Matt (and Colin, and the rest of the crew!) for getting this to us!

Is there a reason book 2 is almost twice the file size of the original book 2?
You must log in or register to reply here.