L. More than Patrol Squadrons, Communications Squadrons are highly variable in size, dependent on both zone and detached units.

O. Yeah, I'm making this up as I go along, but it's certainly starting to coalesce.

P. Getting decision makers the correct information in an expeditious manner, and placing the right people in the right place at the right time, passes the initiative to the Confederation military.

Q. We could distinguish the Navy packet boat system on two hundred tonne packet boats with five parsec range, against a deteriorating ecks boat network, using up their remaining stock of one hundred tonne ecks boats.

R. Conceivably, you could squeeze in an extra parsec into a technological level fifteen two hundred tonne packet boat, which would only be used for transferring highly critical information, and captained by their best Naval aviators.
C

T. I think detachments are important, because personnel can be transferred on ships operated by the Logistics Squadron, especially large contingents, and information by Patrol Squadron assets and third party private contractors, especially for routine data packets on the last mile.
C

Where are the Kilrathi?
C 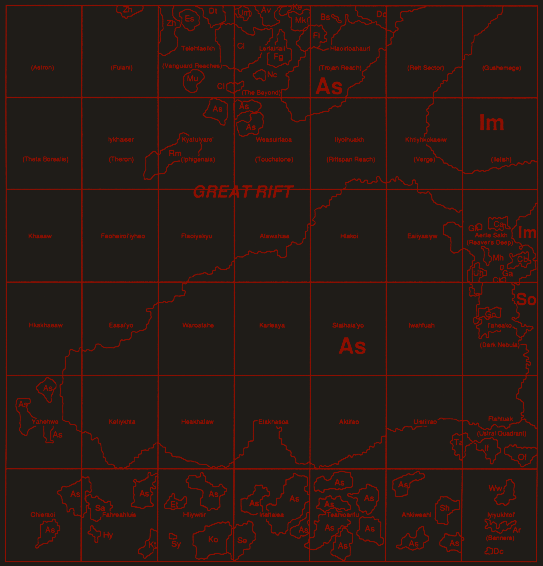 In theory, an Aerospace Group could have a maximum of six wings, thirty six squadrons, eight hundred sixty four fighters.

Each Fleet Division should have an assigned Aerospace Wing, with each battleship, battlecruiser and dreadnought assigned two fighter squadrons, and a composite squadron and the utility squadron spread around..
Last edited: Oct 14, 2022
C


1. A Strike Squadron is basically the unit designation for all starwarships not assigned to any of the other three principal squadron types, Fleet, Patrol and Carrier.

2. I'm going to give it one to six Strike Divisions, with one to three combatants, each.

3. You're not likely to find either a battleship or a dreadnought assigned to a Strike Squadron, but individual battlecruisers.

4. Individual fighter or fleet carriers will be attached to, or have attached, Fleet Squadrons.

5. However light carriers are defined, those could be.

6. Escort carriers tend to be a bit slow for the strike role or mission, but can be attached to a Strike Squadron; you can build a Strike unit around a light carrier, but you'd not want to do that for an escort carrier, since they'd lack a lot of the command and control (and communications and so on) facilities, that you could stuff into a light carrier.

7. Since I'm still going with stereotype of the cruiser gap, most individual cruisers are assigned to Strike Squadrons.

8. I dropped the flotilla aspect, for upto six separate divisions, because the mission is unlikely to require that much cohesiveness.

9. You can assign almost any starship to a Strike Squadron, paramilitarized or not.
C


Strategic Reconnaissance - likely Solomani Security with seconded Navy equipment and personnel, or their own and retired Naval personnel

Infiltration - off the books starwarships and military personnel
C

Confederation Army: Above and Beyond

1. I don't think the Confederation Army has any spacecraft.

2. This is likely deliberate.

4. As well as orbital bombardment.

5. Which probably explains the need for logistics barges, since the Navy would be obligated to maintain support for ground operations.

6. The Army commanding officer probably could arm twist local space forces to provide some support, but anything interstellar probably has to be coordinated through the Navy.

7. Since we're at technological level fourteen, the Army has complete control over gravitationally motivated vehicles, and other aircraft.
C

2. Which would explain their envy of the Navy packet network(s), and possibly the retention of the remnants of the ecks boat system.

3. Undoubtedly, they do have couriers for their use, but probably prioritized for their more urgent needs.

6. Preplacement of stealthed starwarships into the occupied territories, so it's need to know and no records.

7. The usual placement and recovery of assets into enemy space.

9. They probably have dedicated assault carriers for their security troops, rather than relying on the Navy for that.
C

1. According to canon, the Imperium Navy discarded the battlecruiser concept, at some point.

2. However, the Confederation Navy appears to have adopted the concept right from the start, in the form of technological level twelve one hundred thirty kilotonne Victory class.

3. This is followed by the Zeus class, at technological level thirteen, still jump factor three, and one hundred fifty kilotonnes.

4. Cutting edge at the start of the War of Imperium Aggression was the technological level fourteen Prometheus class fast dreadnought, at a quarter of a megatonne, and jump factor four.

5. I'm going to guess that post war reconstruction would likely have skipped battlecruisers, in an effort to shore up the number of actual line of battle ships, which at the easiest and fastest would be repeats of the Promethii.

6. Going by the new set of combat rules, quarter of a megatonne would appear to be the upper border of viable line of battle ships, so there's little point in conceptualizing anything larger.

7. In theory, battlecruisers are capital ships the same tonnage and armament as that of contemporary line of battle ships, but sacrificing armour for speed.

8. So, at technological level fourteen, a battlecruiser would be weighing in at between two hundred and two hundred fifty kilotonnes.

A. However, the Promethii dropped a factor in acceleration, which appears to be still viable for the line.

B. While I don't understand how Dungeon and Dragonifying works out in comparison to current statistics, the Promethii appear to have compromised between actual acceleration, and modified protection, in favour of the latter.

C. It's possible that the current fleet standard range of three parsecs is to keep the (refurbished) remnants of the Victory and Zeus classes relevant.

D. Presumably, the Confederation kept manufacturing Zeusii from technological level thirteen shipyards, since they didn't really have anything else capital sized available, outside of carriers.

E. At some point, technological level fifteen went mainline in the Confederation.

F. The question would be, what starwarship type(s) would be given priority not just for a refit, but a new design to take advantage of the new advancements, from the keel up.
C

G. After Solomani Security gets their stealthed technological level fifteen spy starships, the Confederation Navy gets to start mass producing.

H. Chances are, they'll start with jump factor six courier packed starships, if only to see if there are any bugs they still need to work out.

I. Then probably hundred kilotonne plus battle riders and/or monitors, since a lower teched starship could transport them, and they don't have to muck around with the jump drive.

J. And likely fightercraft, for the same reason.

K. And finally, you come to the introduction of a new cutting edge capital starwarship for the Confederation Navy.
C

L. My view on this is that they'll want to start replacing the Zeusii, especially for the (deep) strike mission and the rapid response role.

M. At range of three parsecs, you pretty much have to preposition the battlecruisers, in order to intervene in a timely manner.

N. With the new technological level improvements, they could squeeze out some extra volume, so that they could increase performance for the battlecruisers to five parsec range.

O. Normally, I think they would default to an appropriate sized meson gun.

P. But since I think they'd prefer some distance between the somewhat lightly armoured battlecruiser, and their opposite number, a distantly ranged particle accelerator seems the more likely candidate for the primary armament.
Last edited: Oct 17, 2022
C

Q. With the new ruleset, it seems an obvious move to secure a hundred kilotonne hull.

R. It's not only the greater structural strength, but also the minimum crew requirement is reduced an additional one sixth, from half default at fifty kilotonnes, to one third default.

S. This isn't precisely so that the Confederation Navy starwarships can reduce crews, more that in the event of casualties, the starwarship can be run as efficiently as fully crewed, even with two thirds of the crew is hors de combat.

T. You can also stuff in a larger spinal mount, rather important if doctrine seems to prioritize alpha strikes.

U. Also, I think that between crew reduction and spinal mount targetting, for a starwarship, there's probably no point in anything beyond being exactly fifty kilotonnes, before jumping to hundred kilotonnes.
C

V. By that logic, the Normandy class heavy cruisers should be hundred kilotonnes.

W. Arguably, so would the slightly lowered teched Minsk class.

X. Strike cruisers would be fifty kilotonnes, which probably does sound better than medium cruisers.

Y. Twenty five kilotonnes should be ideal for light cruisers.

Z. But the Texas class is listed at eight kilotonnes, and the Yarmouth at fifteen kilotonnes.
C

1. By default, the primary armament of most Confederation Navy starwarships should be meson weapon systems.

2. Since the Terrans had invented them, and let's assume, are masters in their use and application.

3. Going by the current ruleset, anything squishy would opt for a particle accelerator weapon system, since they tend to outrange anything else.

4. Battlecruisers are, by comparison to battleships, remarkably squishy.

5. Let's assume that once they decided on a capital starwarship design, they stick to it, for economies of scale.

6. So, despite being battlecruisers, the Victories and the Zeusii, were the only line of battle starwarships that the Confederation Navy had at each technological level, and so had meson spinal mounts.

8. But by the time we pass the technological level fifteen barrier, the Confederation Navy might have an embarrassment of riches, and could have space for a new battlecruiser design.

9. And so, might be in the market for a particle accelerator spinal mount, to complement the meson gun spinal mounts carried by the current line of battle starwarships.
C


Today at the Behest of one of my members i dive into the unusually engrossing discussion around Shift rotations on starships. Was captain Jellicoe right to suddenly change the Enterprise D from a 3 watch to a 4 watch rotation. how disruptive was it? and what were the benefits?


1. One of the the perks of a hundred kilotonne hull, you actually can divide your unmodified crew by three.

3. I actually had factored in a fourth shift, in favour of having a frozen watch.

4. Though it appears that the Confederation Navy prefers to off load the frozen watch on supply ships.

5. Shifts are eight hours long, with supposedly the other sixteen being for rest, recreation and 'refreshing.

6. The fourth shift would be in reserve, where you place the crew that is on leave, off the starwarship detached duty, or hospitalized, and anyone who is currently surplus.

7. It isn't that they're doing nothing for eight hours a day, they'll be getting focussed training.

8. Every month, the shifts rotate and adjust.

9. So Confederation Navy starwarships tend to be overstaffed by at least a third more.
C

A. Alternative spinal mounts, mass drivers and railguns, are too short ranged.

B. Besides requiring rather expensive ammunition.

D. And that's not accounting for short range hyperopia, and closer.

E. The largest particle accelerators are between twenty two and a half to twenty eight kilotonnes, a reasonable size for the bigger capital starwarships.

F. And certainly enough to knock out anything but a line of battle ship.
You must log in or register to reply here.