Status
Not open for further replies.

Staff member
What if I was to say...that if we reach 500 members on discord, we will do another Discord live at the end of the month...perhaps on Aliens of Chartered Space 3

Staff member
Look what has just been delivered

Our production copy of the Traveller 2300AD - Ships of the Frontier, has just arrived and it looks amazing!
This book contains drones, fighters, freighters, landers and warships, along with ships used by alien species at the edge of human space.
Have you pre-ordered your copy yet? https://www.mongoosepublishing.com/...ontier?_pos=1&_psq=ships+of+the+&_ss=e&_v=1.0

Staff member
#TravellerRPG #2300AD - Tools of Frontier Living will be available for pre-order and PDF on Friday 30th September 2022! Only 10 days left

Tools of Frontier Living is packed full of essential equipment and spacesuits. Head to our Instagram where we showcase some of the Artwork and Page spreads from inside the book! 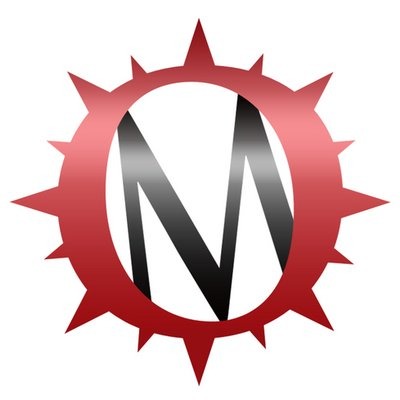 Providing gamers with fantastic RPG worlds in which to immerse themselves

Staff member
Attention everyone, we have added a Wishlist section to our website!

MongooseAlisha said:
What if I was to say...that if we reach 500 members on discord, we will do another Discord live at the end of the month...perhaps on Aliens of Chartered Space 3

Invite your friends to join! https://linktr.ee/mongoosepublishing
Click to expand...

Incredibly happy to announce we have reached 500 members on our discord server! Discord Lives all around! Have you joined yet? https://linktr.ee/mongoosepublishing 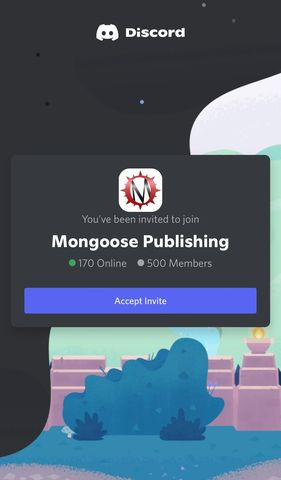 Staff member
The production copies of The Journal of the Travellers’ Aid Society volumes 7-12 and Bu and Embla’s Guide to Starports of the Marches have arrived!!

Another massive thank you to our Kickstarter Backers and JTAS Submissions, who helped bring this to life. We are incredibly excited for you to receive your copies and for the latest JTAS editions to go to general release!
#travellerrpg #ttrpg #mongoosepublishing #JTAS

Staff member
Look what just touched down in Mongoose Publishing HQ!
Anyone who has pre-ordered any of these four products, they are now being sent out as I type!
1. Traveller 2300AD: Aerospace Engineers' Handbook
Provides everything you need to design the ships of human space, the alien Kaefers, Pentapods, and Sung. It also covers the design of drones, space stations, and alternative means of achieving orbit.
You can get yours here

https://www.mongoosepublishing.com/.../aerospace...
2. Traveller Core Adventure 3: Errant Lightening
The Core sector is the heart of the Third Imperium, the seat of empire and an economic powerhouse, but even the Core has its backwater worlds. One such place is Adan, a dry, almost desert world with a unique ecosphere and a secret that few know.
You can get yours here

https://www.mongoosepublishing.com/.../core-adventure-3...
3. Traveller 2300AD: Referee's Screen
Fully compliant with the latest edition and with all the important tables and charts, the new 2300AD Referee’s Screen is constructed from quality heavy-weight cardstock that will stand the ravages of many years’ gaming.
You can get yours here

https://www.mongoosepublishing.com/.../2300ad-referees...
4. Traveller: Explorer's Edition
The Explorer’s Edition provides all core game rules for Traveller, plus a universe creation system that allows referees to create new star systems on the fly for their players to visit and explore…
You can get yours here

and 2300AD: Tools of Frontier Living🛠 will be available on PDF and for pre-order today!

Make sure you are keeping your eyes peeled on our website and social medias and notifications on for the announcement. https://linktr.ee/mongoosepublishing

You will also receive a free PDF copy with every book purchase!

We can't wait to hear your thoughts.

Staff member
Traveller 2300AD: Tools for Frontier Living is now available on PDF and for Pre order! Get yours now! https://www.mongoosepublishing.com/products/tools-of-frontier-living

The Frontier Beckons. The Core is advanced, comfortable, and safe. Too safe for some, for whom the wilds of the Frontier promise adventure, riches, and freedom.
Humans are tool-using animals, and in the pages of Tools for Frontier Living are a selection of equipment needed for survival on alien worlds. To survive, to live and prosper, humanity must use all the tools at its disposal to tame these hostile worlds. Or die trying.
Inside you will find:
• Space Technology
• Exploration and Survival Gear
• Industrial Equipment
• Consumer Goods and Services
• Medical Technology
• Security and Police Equipment
A reminder we offer FREE UK shipping on orders over £100 and $150 to the US! You will also receive a free PDF copy with every book purchase!
We can't wait to hear your thoughts.

Staff member
Traveller: Aliens of Charted Space 3 is now available on PDF and for pre-order! 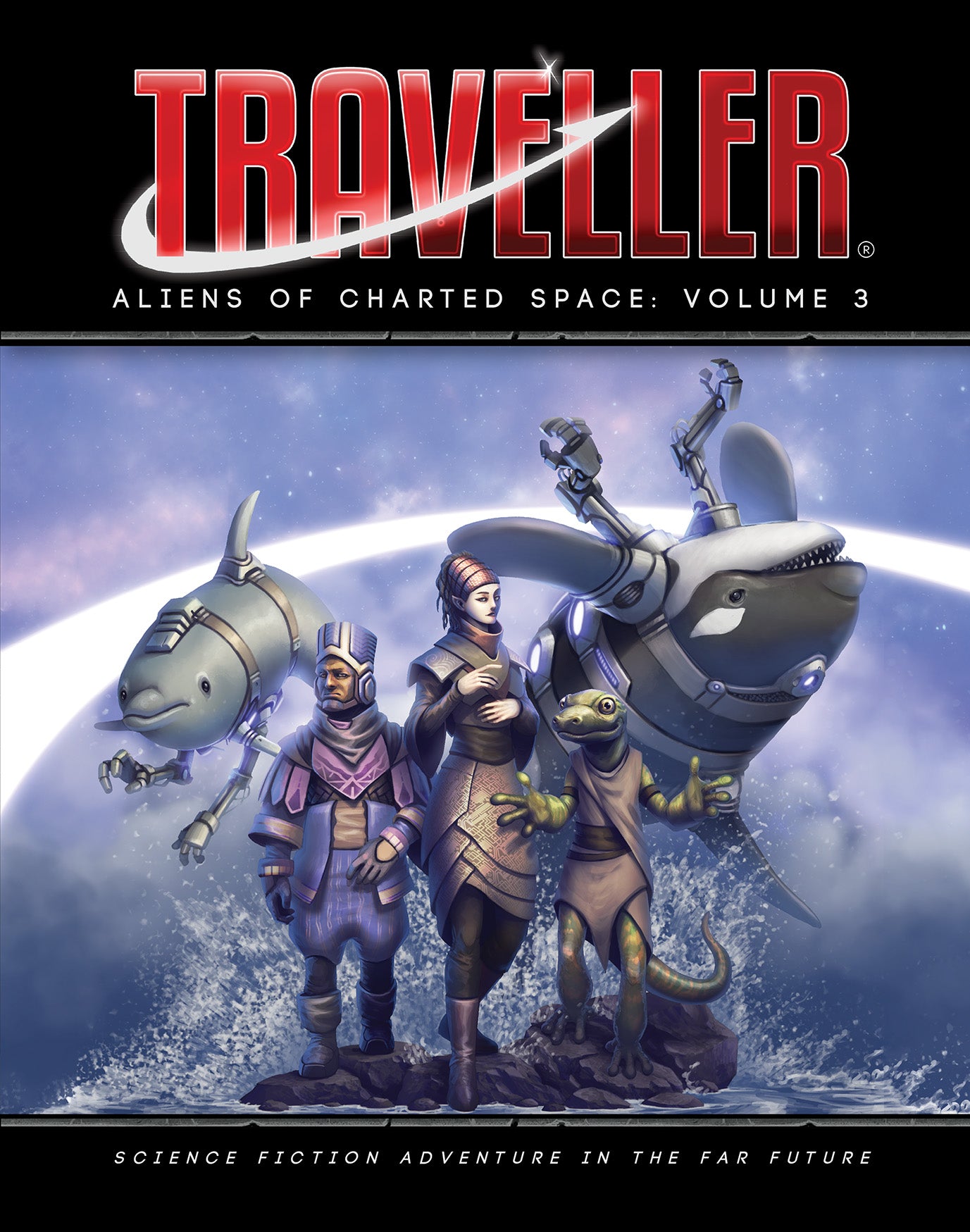 Aliens of Charted Space Volume 3 explores five races – the pacifist Darrians, the enigmatic Geonee, the playful Dolphins, the aloof Orca, and the bureaucratic Bwaps. Within these covers you will discover the culture and society of these races, as well as their physiology and their psychology.

This book contains rules for creating Travellers from each of these alien races. Within these covers, you will discover the culture and society of these races, as well as their physiology and their psychology.
A reminder we offer FREE UK shipping on orders over £100 and $150 to the US! You will also receive a free PDF copy with every book purchase!
We can't wait to hear your thoughts. P.S Tools for Frontier Living has also been released today! https://linktr.ee/mongoosepublishing

Staff member
Click here! Our worst kept secret is out!

Paranoia: The Perfect Edition will be coming to Kickstarter on Friday 28th of October 2022!

Traditional RPGs are great but... they can get repetitive. How many times have you created a hero to fight bad guys or prevent destruction? Aren’t you hungry for something different, maybe a game that’s a little dark but really funny? Wouldn’t it be fun to play the ones causing destruction for a change?

Say hello to Paranoia: The Perfect Edition, otherwise known as ‘that cool game with a computer and Troubleshooters, and you shoot everything, and the GM lies, and you die repeatedly but holy cow is that game fun’.

Over the years, there have been several editions of the game, from the 1st edition published back in 1984 to the Red Clearance Edition in 2017. Five years later, we noticed three things:

1) Some players and GMs felt the last edition strayed too far from the original setting and themes.

2) Some players and GMs felt the last edition was amazing and want more.

When this happens, there is only one course of action: Try to appease everyone at the same time. Paranoia: The Perfect Edition uses a very modified version of the Red Clearance Edition rules. Some stuff was cut (like using cards) while other stuff was kept the same (wound levels) and new stuff was added (favours). Meanwhile, the addition of the new Accomplice Books means, among other things, you can use missions and material from every edition of Paranoia that has ever appeared (apart from the Edition That Shall Not Be Named).

Make sure you are following us to keep up to date on everything Paranoia as we approach this Kickstarter launch! https://linktr.ee/mongoosepublishing
Upvote 0 Downvote

Staff member
Friend computer has a gift for you citizen. Sign up here to be notified on the #ParanoiaPerfectEd #Kickstarter launch! https://www.kickstarter.com/projects/1990654819/paranoia-rpg-the-perfect-edition

You look worried citizen, Relax! Paranoia: Perfect Edition is [CLASSIFIED]. You are tasked with following our social media platforms to await further information. The computer is your friend. https://linktr.ee/mongoosepublishing
Upvote 0 Downvote

Staff member
Ten days until the launch of the Paranoia: Perfect Edition Kickstarter!

For those of you who haven't heard of Kickstarter before, it is a crowdfunding platform that is becoming increasingly popular amongst the creative community. How it works, is backers pledge money towards a campaign to bring it to life. You will receive updates throughout the process until the product is produced, when it is finished you will then receive the product as well as exclusive rewards!

Paranoia: The Perfect Edition is a love letter to this Origins Hall of Fame roleplaying game. Old characters from previous editions like Funbot are back, combat is fast and we return to using Communists as the main antagonist in the setting (even though Commies also have very few smarts or talent). To bridge the gap between editions, Paranoia: The Perfect Edition uses the last product from the old edition – Project Infinite Hole – as a major event in the new edition's recent history. (That project created a black hole, which apparently is bad inside a city.) The upcoming Accomplice Book comes with conversion rules for running any title from older editions in Paranoia: The Perfect Edition, from 1st Ed. back in 1984 to Paranoia Red Clearance Edition released in 2017.

In only ten days, the world will get that much more perfect. Sign up here to the notified-on launch! Paranoia RPG - The Perfect Edition by Matthew Sprange — Kickstarter #ParanoiaPE 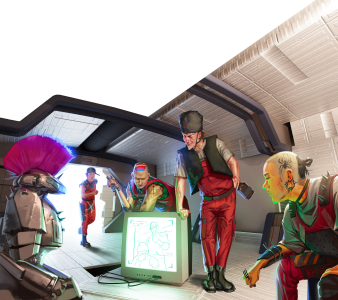 Staff member
The production copies of the Sector Construction Guide box set are in!
Swipe for a first look at the next step in your Traveller Referring journey!

Perfect for referees looking to jumpstart their creativity and develop sectors of their own design.

Focusing on the Foreven sector, an area adjacent to the Spinward marches, the Sector Construction Guide includes:

Available on PDF and for Pre-Order here! https://www.mongoosepublishing.com/.../sector...

Paranoia Perfect Edition Kickstarter will be launched Friday 28th October at 15:00 (BST).
Not that we are excessively counting down or anything... but that is only 3 days and 3 hours to go until #ParanoiaPE

Sign up to be notified here https://www.kickstarter.com/.../paranoia-rpg-the-perfect...
Watch this outtake from our upcoming kickstarter video on our social medias now! https://linktr.ee/mongoosepublishing 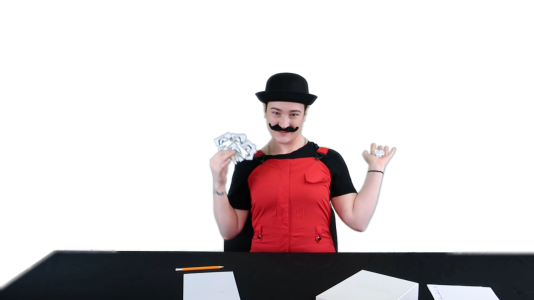 Staff member
#ParanoiaPE will be going live on #Kickstarter in two days! This Friday, 28th October 2022 at 15:00 (BST). Sign up to get notified here https://kickstarter.com/projects/1990654819/paranoia-rpg-the-perfect-edition?fbclid=IwAR316JrSsb97DERKJ_7F1VYmVPKjkGqB-DuItjatKVlrDmOZVthvLa9QTkY

Status
Not open for further replies.