I didn't see a recent thread on custom ships, so here's one to start it off. Feel free to share your own.
Small non-scout based research vessel, For the guy who rolls a lab ship after being caught stealing everyone else's research five times.

The Sjonauka (show-NO-kah) Class Research Vessel is an excellent choice for small science projects on a shoestring budget.
Its streamlined form allows it to land on planets; Improved sensors, with improved signal processing, include life and mineral
scanners; and its twin cargo bays can each hold an advanced base, although only one is usually included. Space is provided for
a laboratory and a medical bay. An air raft bay sits on top of the vessel just behind the hardpoint and in front of the engineering
section.
Some models sport a single beam laser turret. 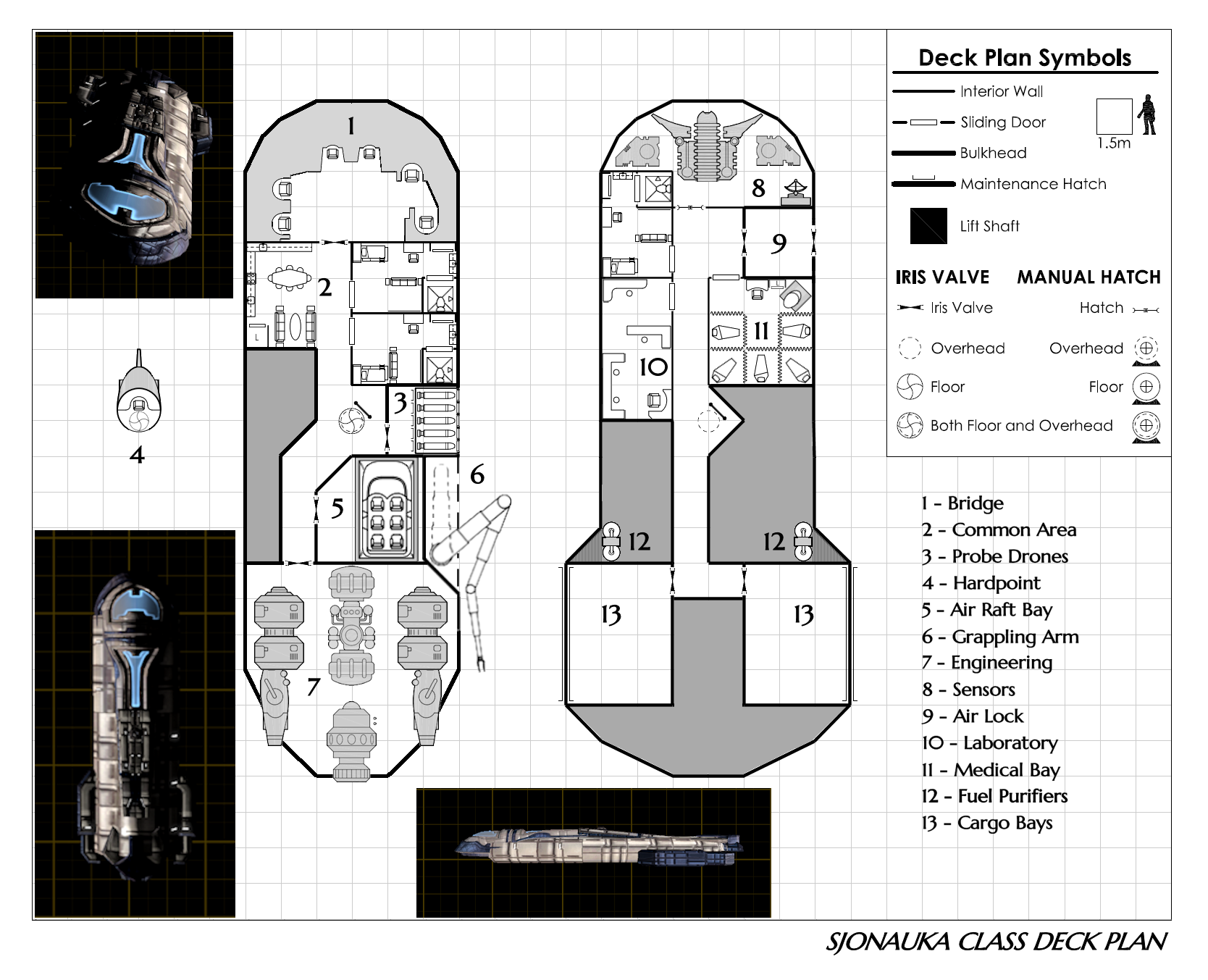 I'll add the one from my design thread, just to make it easier to find.


The Scramasax Light Raider, named after a Viking's knife, was copied on Sacnoth from a captured
Saber Class Light Raider encountered in the Lanth Subsector. The cargo bay was reduced to add a
Medical Bay and an unrep system. It boasts two accurate, high yield pulse lasers triple turrets, a
high yield partical accellerator barbette, and an ion cannon barbette. A reduced mass, high strength
deflector and Class 6 crystaliron armor complete its defenses. One of the two airlocks mounts the
integrated boarding tube/forced linkage for boarding. A 20 ton gig can transport the marines if
getting close is not an option. An unrep system allows the crew to load captured cargo in space,
and can fill the small cargo bay in about 45 minutes. A tow cable is installed for claiming and
retrieving disabled vessels." 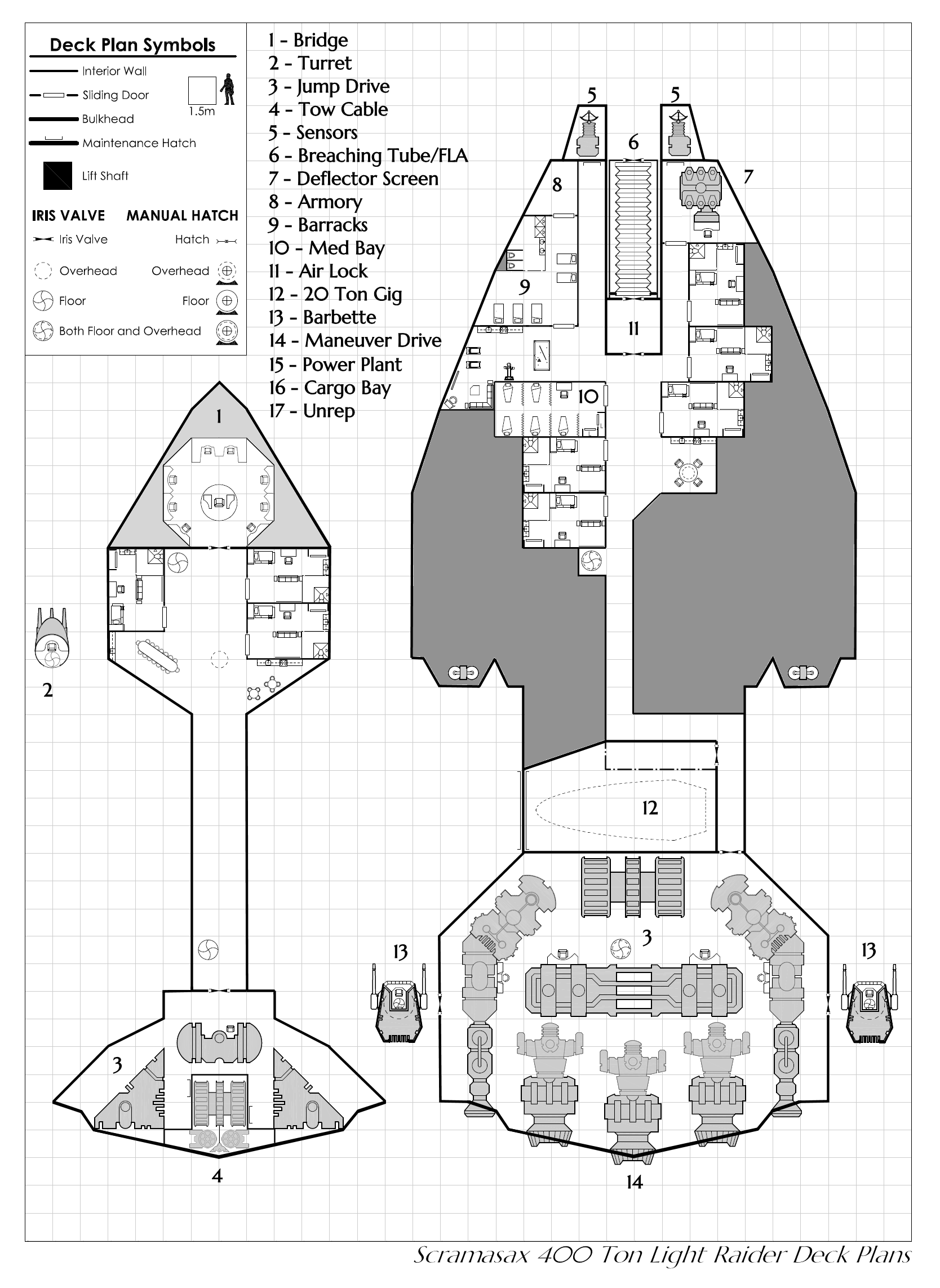 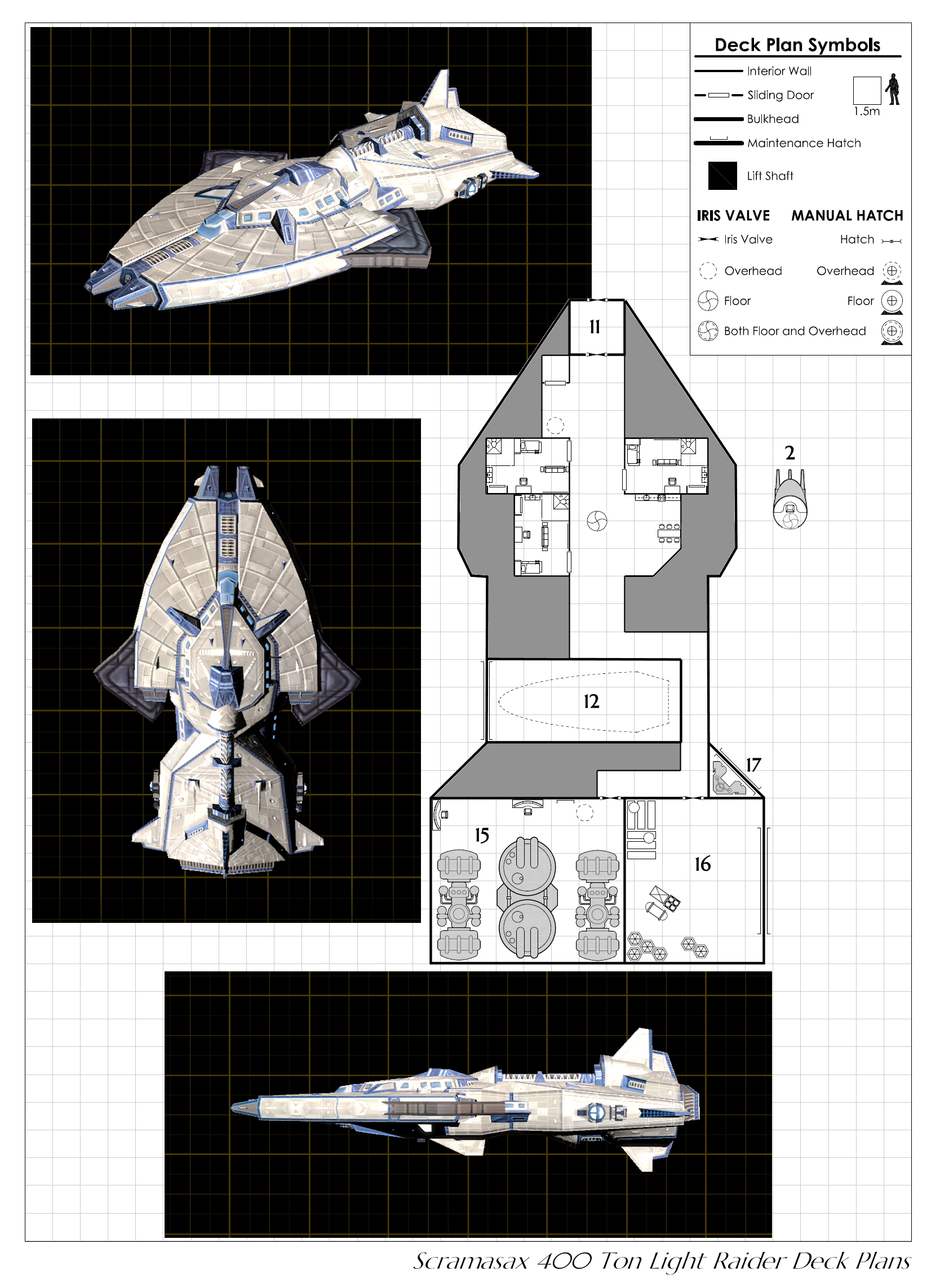 Very nice.
Which program did you use to create the 3D-model of Scramasax Class Raider?
I really would like to see a 3D-model of the Sjonauka Class Research Vessel as well.

Thanks!
That's the Starship Creator from Galactic Civilizations 3.

I uploaded a new Deck plan with the model on it for you.

I uploaded a new Deck plan with the model on it for you.
Click to expand...

Thank you very much. It looks very good. I really like that it is similar to the common cylindric theme of other ships in the core rules and Highguard but with a more futuristic touch.

This one is more of a based on a look than a port. The image is from a screenshot of my ship, so anyone can use it. 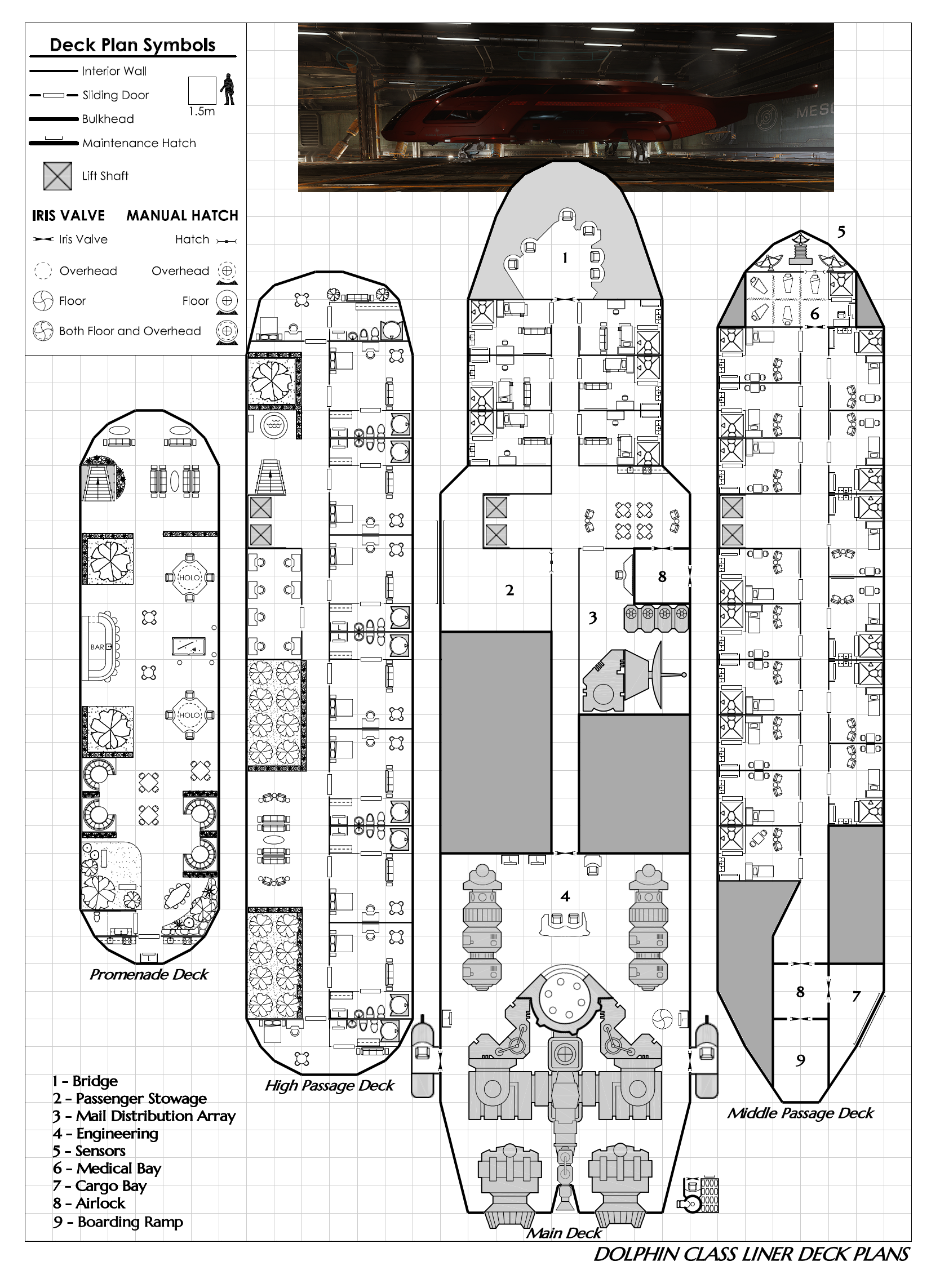 Nice plans. But, I think the scale is off somewhet - if each square is 1.5m (5 feet) then most of the beds, doubles included, are about 4 feet long!

crazy_cat said:
Nice plans. But, I think the scale is off somewhet - if each square is 1.5m (5 feet) then most of the beds, doubles included, are about 4 feet long!
Click to expand...

Yep. I missed adjusting the scale from the Starship Symbols by Robert Pearce. Fortunately, there aren't too many battles in a stateroom that it would negatively affect.
Will try to watch that better going forward.
OR, post some!

The current versions of the PDF readers (Edge and Adobi) I have don't allow selections straight off the page any more. So I have to shift print screen. If anyone knows a setting to fix that, I'm all ears.

Knarr Class Light Trader. Named after a Viking era cargo boat. A cheap, cramped 150 ton trader that can carries 100 tons of cargo.
It has the requisite common area for two double staterooms, but at least two crew members have to do double duty. 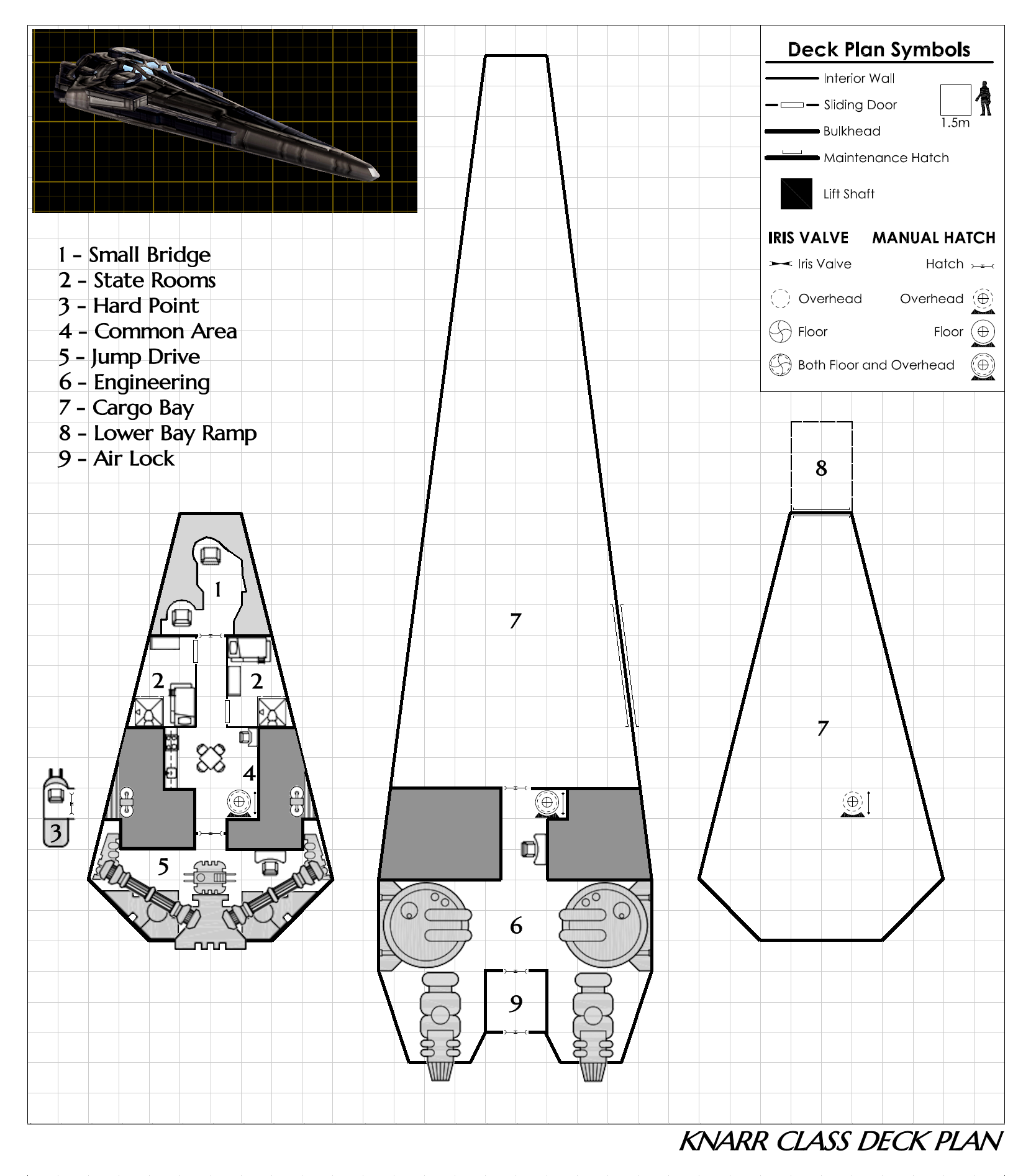 The Needle Bodkin Class Courier is a 100 ton commercial starship that provides swift transport through contested space.
It was specifically designed not to outrun military patrol craft, but will easily outdistance and outmaneuver all but the most specialized pirate vessels. 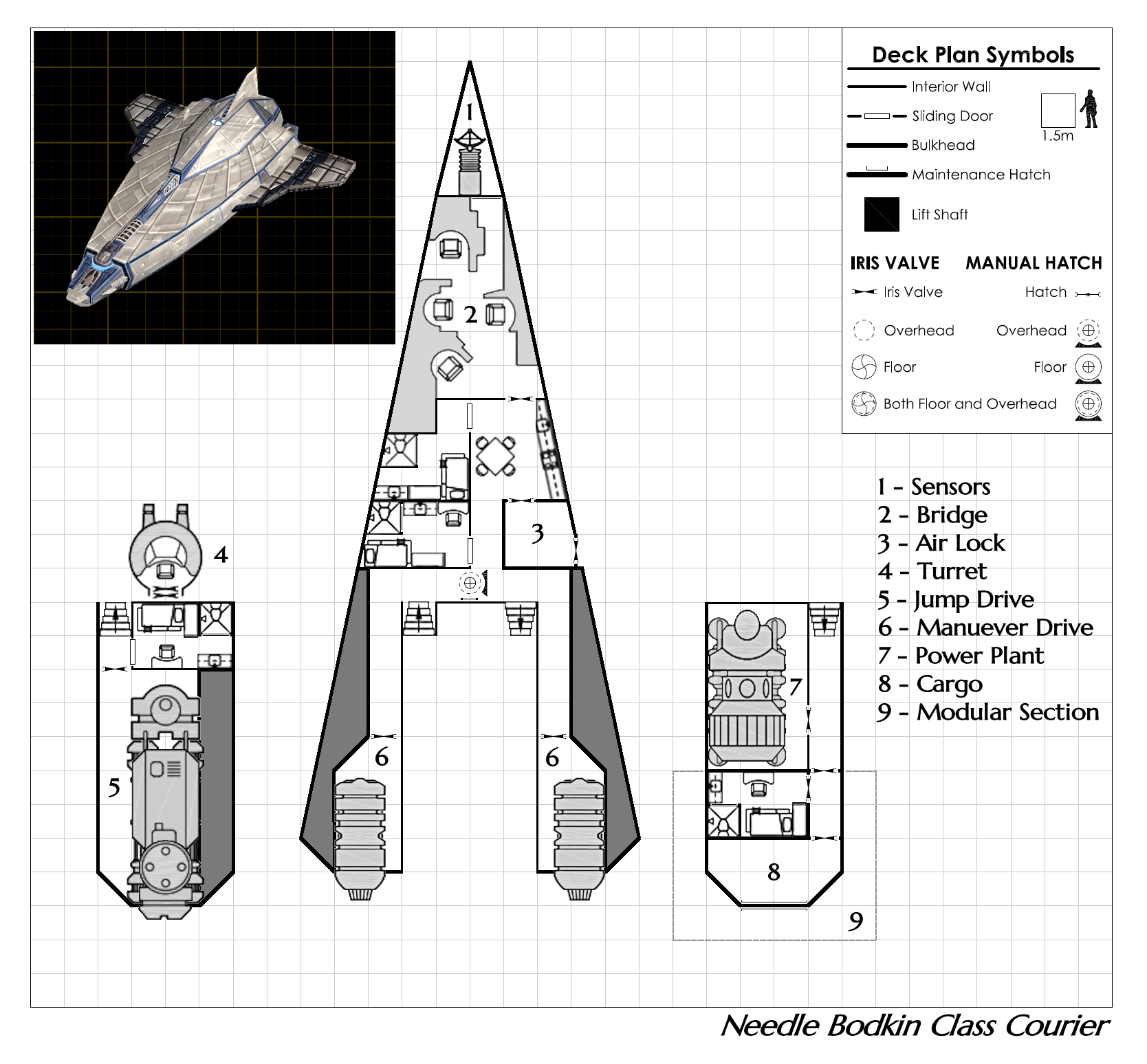 The Valkyrie Armored Dropship was developed by Nordstrom Arms' Valhalla Division to provide a holistic solution for planetary militaries and small mercenary forces.
Its standard tech level ensures near universal access to maintenance and spare parts.
The armored frame protects it from light ship grade weapons.
It mounts two light weapon pods for vehicle grade weaponry of less than .25 ton each, and a smallcraft grade particle beam in a single turret to discourage interceptors.
Seating is provided forward of the cargo bay for twelve troopers.
The 20 ton cargo bay with a clamshell door/ramp can deliver one standard APC/AFV into a hot drop zone, during a touch and go, or 20 tons of cargo and equipment in areas where there is time to offload normally.
The armored M7 engines ensure a quick delivery that will outrun most pursuit craft.
Its batteries provide 9 minutes of power.
Life support is limited to 24 hour stints outside of breathable atmospheres.
The small internal storage space on the bridge is often fitted with survival kits and a mini-fridge for the crew. 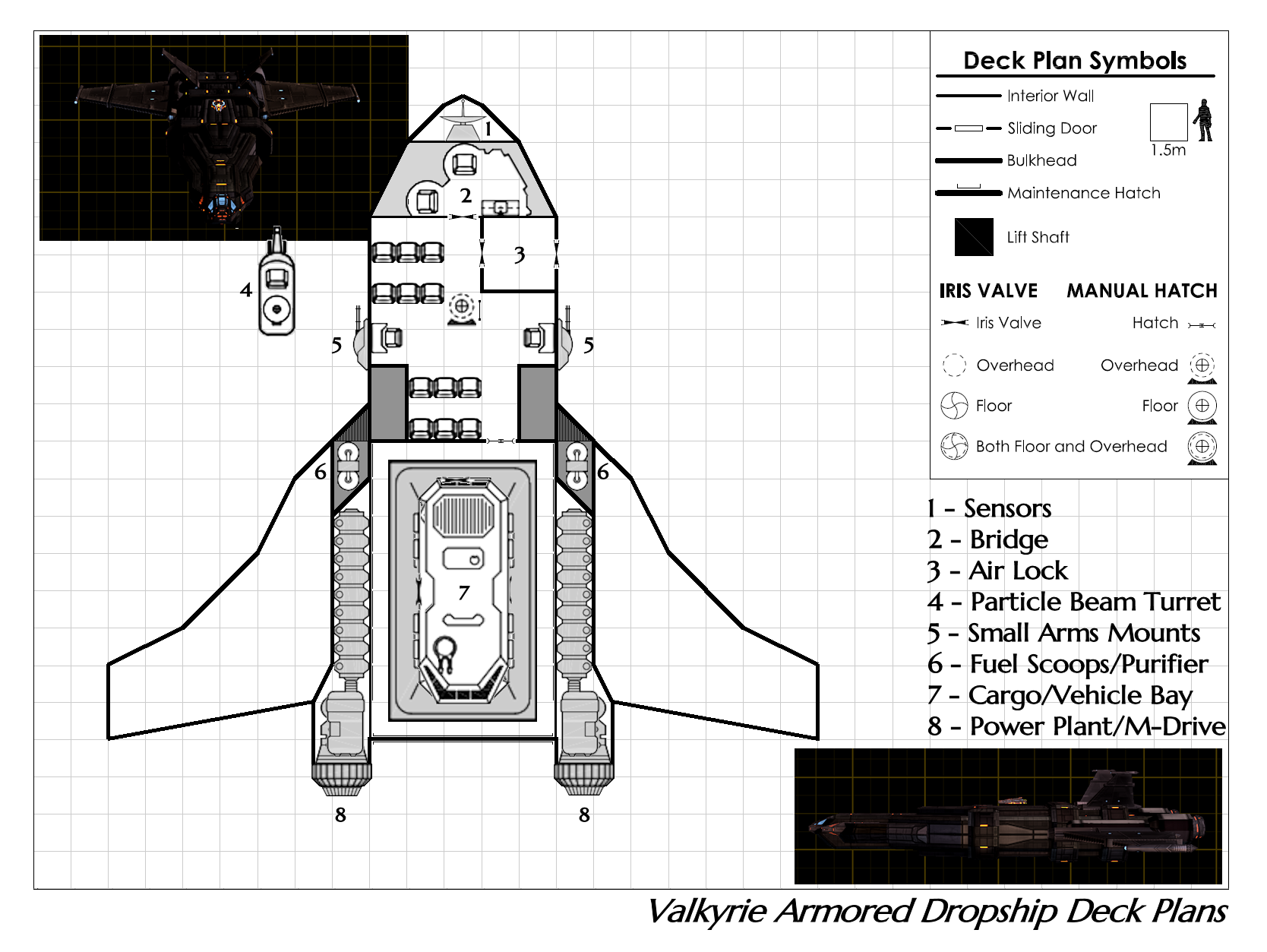 Good stuff ....posting this to convince myself I have access

The 25 ton Cygnet Light Fighter, from Cygnus Shipyards is a long range patrol fighter intended to operate in squadrons. They are designed to operate out of a 54 DTon Hangar Module on Cygnus Duo and Quad modular ships.

You're using GalCiv as your external view rendering program right?
Also, what are you using for your deck plan art?

You're using GalCiv as your external view rendering program right?
Also, what are you using for your deck plan art?

Thanks!
Yes. GalCiv III. If you export the models, you can 3d Print them for tabletop... although half the time I forget to save the models... and I don't have a printer... and my wife won't let me get one...

I use paint shop pro. Although any editor with layers will do. Background grid. Hull outline layer. A different layer for interior walls, so when you change them you don't erase the hull, two or three layers for gear, either under or over the wall lines as desired.

I don't remember where the grid came from. I have been trying and failing to find it again, so if anyone knows, please point the way there.

Redesign of a modified Chameleon Commerce Raider from FASA (their deck plan packs are still available on DTRPG)
This is the current hero ship in my campaign. The players just upgraded to it and added a few things.

Record Sheet: Get it here 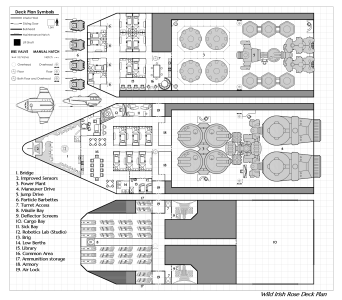 The Leyland Buffalo Class Trader - A cheap, low tech solution for all your restful nights and lack of transport nightmares...

The Leyland Buffalo Class was named after an ancient Terran wheeled cargo hauler of questionable quality - a historical warning that is completely lost on the modern buyer. Conceived as a flying brick used to haul interstellar cargo, it can only be described as cheap and repairable at any orbital capable of supporting interstellar traffic. That's convenient as it needs repairing quite often.
The Engines run hot and use too much power, while the power plant is larger than it needs to be, just for the sake of using casings meant for a larger ship's plant that was also in production by the shipyard at the time of design. The small bridge ensures that it handles as well as the brick it resembles, while the lack of a fuel purifier and aerodynamics should keep sane pilots from venturing anywhere lower than a planet's orbital starport. It's only feature that might be called an extra is the docking space for an air raft (not included).

Record Sheet: Get it here 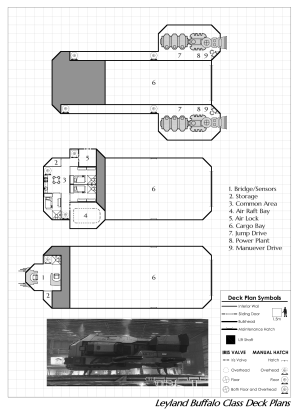 One idea I've been toying with is taking a Sword Worlds merchant all the way to Drinax with various adventures on the way and break down there for the crew to be recruited by King Oleb - and a knackered old Knarr plus fuel bladders and some age quirks would be perfect for that job.

Shouldn't the Buffalo have 6 rather than 5 tons for the airlock + air/raft under options?

Thanks!
No, Air Rafts seem to follow the spacecraft docking rules, not vehicle storage rules.
Scout courier from High guard:

Oh, I see. No. You get a free 2 ton airlock for every full 100 tons of hull. Not figured into costs or tonnage. (Unless you add security systems to the airlock.) The air raft is 4 tons, so the docking space for it is 5 tons.
Last edited: Jul 19, 2022
You must log in or register to reply here.