By my estimate, a four dice rocketized bullet would have three dice at nine metres, two dice at seven metres, and one dice at five metres.

For three dice, one dice at six metres, two dice a tad over eight metres.

For two dice, seven metres for one dice.

Going by minimal barrel, half a dice otherwise.
C

You could rocketize the advanced combat rifle, which would drop range to two hundred fifty metres, but keep all that neat electronics, and presumably, considerably lighten the rifle.

Almost perfect for CAVALRY recruits, if you give them some trigger discipline, since the bullets now cost double, and default magazine is almost halved to eighteen rounds.

Speaking of discipline, undoubtedly Imperium and Confederation armed forces aren't allowed personal electronics, and issued with secured ones for off base use, only activated when at a substantial distance from military and government facilities, and quarantined if back on base or in a government facility.

Military bodycams would probably be issued on the field, if they want to record their activities.

It's likely that CAVALRY Recruits and Volunteers will try to smuggle in their personal communicators.
C

Although only holding four rounds, the Sentinel is light and extremely easy to use. Its rocket projectiles continue accelerating after leaving the barrel, so range is not affected by barrel length.


It's interesting (ie annoying), that you have dig up this sort of information, buried wide away from the design sequence.
C

1. What are the implications?

2. First of all, either the writer was looking at the wrong column, or what they were actually going for was a nine millimetre medium handgun accelerator pistol, or revolver.

3. Damage should be three dice minus one, not minus three.

4. Ammunition cost seems correct at a modified two starbux per round.

5. Base range is listed at fifty metres, not sixty.

7. High capacity would be plus forty percent, so three point thirty six (3.36).

The bulky trait is gone.

So, you send in recruits and grannies into battle, with accelerator pistols fitted with extended magazines; no recoil.

Essentially caseless, which makes it a third cheaper if that were a requirement.

I'm going to say that advanced projectile weapon trait should make a difference, though to be specific, the rules don't say it won't.

Since barrel is dependent on receiver for cost and weight, it halves automatically with the receiver, and you don't need to half it again.

It's basically point and click, so practice ammunition anything, and therefore cheap, on another cheap practice platform.

The downside is range, basically, two hundred fifty plus, and ten metres below.

The accelerator pistol is so light, you can easily have an extra handgun for close combat.
C

Absurd as it seems, you could use a derringer concept with four minimal barrels.

Instead of replacing the cylinder, you pop the break open, and you just load up four more bullets.
C

Or, you could have two over barrels with rocket bullets, and the two unders with snub bullets.
C

And I made the realization, you're still going to have to deal with heat.

Careful reading of the rules, barrel lengths are not discriminated against, so minimal still does qualify as being able to be heavified, and in this case, has no effect on base range, since velocity is the same whether for handguns or rifle slugs.

Shotgun shells are comparatively complex, and what follows is speculation: the rocket is two staged. The entire shell accelerates forward, and acts as it is still in barrel for a designated period of time; then the second stage with the pellets separates, once the requisite (muzzle) velocity is achieved. Accuracy may be minus three.

Coming back to heat, rocketified rounds are rather fat slugs, so you're going to have less of them for a given magazine volume, so cooling might catch up when reloading.

Maybe there are special chill cartridges that you can fire; I should look into the gas payloads.
C

While the question of reverse engineering existing problematic weapon platforms has been avoided, the issue is, besides unrealistic bang for buck for the advanced combat rifle, their ammunition exists, and therefore can be utilized and modified.

So while the default rocketified variant of heavy rifle would be five starbux per round, the default rocketified variant of standard advanced is three quarters of a starbux, or more precisely, forty round magazine for probably thirty starbux, and the heavy one thirty round magazine for forty starbux, or one and a half starbux per round.
C

It's actually been an interesting experience, exploring sidearm options.

I remember disrespecting the accelerator rifle, though thinking about that, since only long and very long barrels actually extend the range, why do you need a rifle? I guess this is what we call an inadvertent retcon.

The ammunition that would profit the most, is the humble light rifle.

Range is increased from one hundred fifty to two hundred fifty, and you can use a minimal barrel; downside would be increased physical signature, in other words, the bunny is going to see it coming, with something sparkly heading in it's direction.

The survival rifle will be literally compact and skeletal.

Minimal barrel would have shrunk range to five metres, and damage to two half dice, whereas a light accelerator rifle would have one dice to ten metres, and normal two dice to two hundred fifty metres.
C 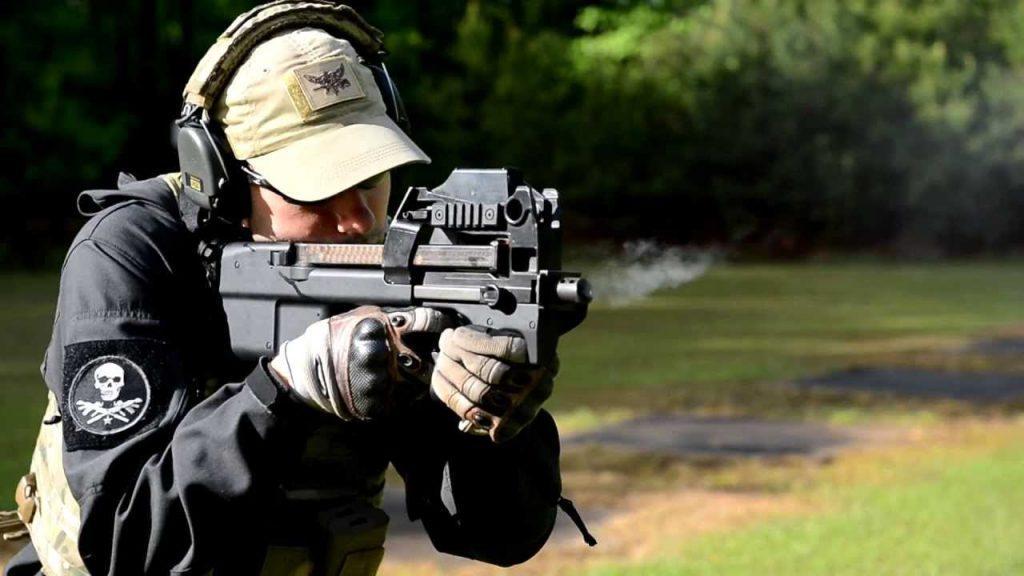 I sort of imagine that an accelerator minimal barrel bullpup submachinegun would look like this.
C

You should be able to fire on the move a zero gravity weapon, as it were gyroscopically stabilized.

Outside of the ammunition costs, accelerator rifles, or pistols, should be have been a lot more popular, especially for a military that wouldn't care about that aspect.

The downsides are a fixed range from ten to two hundred fifty metres, and smaller magazine capacity. Once the enemy get to close quarters, you drop the accelerator, and draw your chainsword and a snub pistol in the off hand.

Or you have a bayonette attachment and the snub pistol as an underbarrel.
C

If heat dissipation is counted during the round, you're going to start getting problems with the fifth full automatic discharge.

So a sixteen round magazine would be a control on how much heat has accumulated.

You could pop the barrel and the magazine, at the same time.
C

Sixth round, five rounds times three for burst capable is fifteen, plausibly eighteen at minus four at the end of the sixth round.

Snub pistol rounds are too slow, John Wick could easily dodge them and Chuck Norris could catch them and throw them back.
C

We're back with the pencil.

The problem with the pencil, is that it requires a different skillset, so you might as well stick a bayonette on the end of the accelerator gun.

Nowadays, infantry has to monitor the sky constantly.

I wonder if in the future that holds true for the ground, besides anti personnel mines. In Forty Kay, you have moles and torpedoes that burrow through the ground.
S

One dice plus two, or three to eight damage; one kilogramme.

Knife has no weight, but only one dice of damage.
C

Field knife seems a compromise, one dice plus two, but at three tenths of kilogramme.
You must log in or register to reply here.