You can grab your own copy right here: https://www.mongoosepublishing.com/aerospace-engineers-handbook.html

US 2300AD Travellers can get theirs here: https://www.mongoosepublishing.com/us/aerospace-engineers-handbook.html 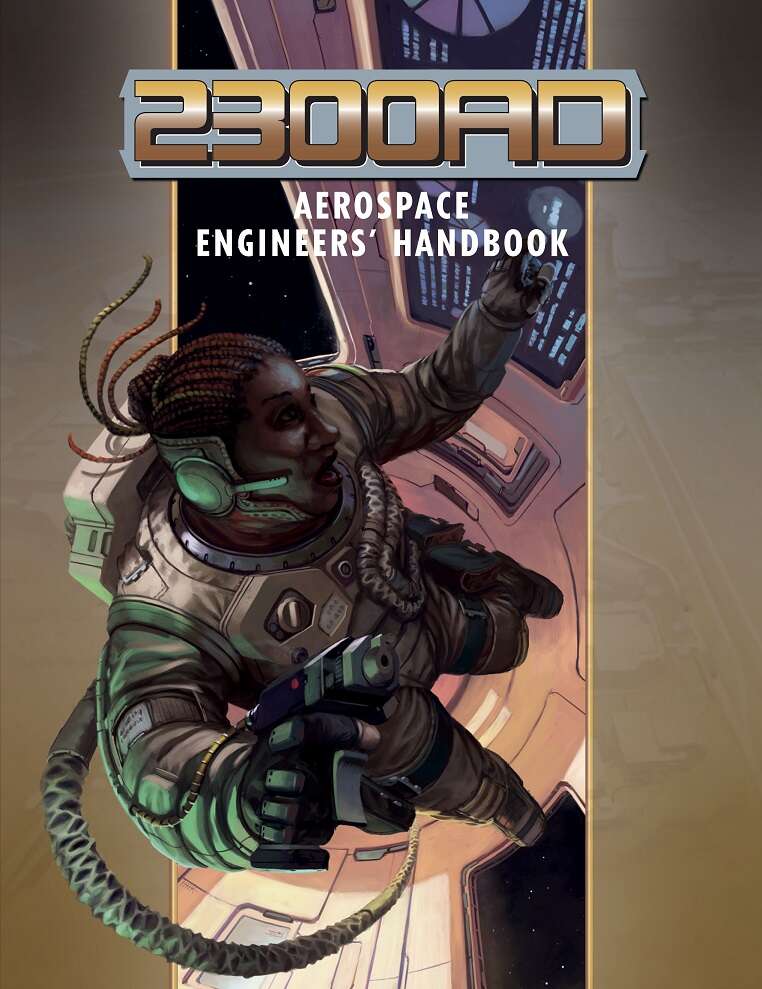 Aerospace engineering is the art and science of designing spacecraft and starships. This practice encompasses a range of craft from sleek surface-to-orbit craft to lumbering bulk carriers, and the aerospace engineer is key to their design.

Spacecraft and starships are the lifeblood of exploration and commerce. They are also vital in the defence and acquisition of colony worlds and the economies that rely on them. The stutterwarp drive provides the key to interstellar travel. Rather than taking decades or even centuries to reach the stars, stutterwarp reduces that time to days. The most difficult part remains escaping a planetary gravity well; once in orbit, you are halfway to anywhere.

The Aerospace Engineers’ Handbook provides everything you need to design not just the ships of human space, but also the vessels of the alien Kaefers, Pentapods, and Sung. It also covers the design of drones, space stations, and alternative means of achieving orbit.

Alongside this, there is further information on those living in space, the outsiders who abandoned planets for the stars, along with the major space powers and their fleets. The Aerospace Engineers’ Handbook also contains a selection of drones and ships, for Travellers to command, fight, or run away from, with advanced rules for spacecraft combat.

(I look at the Pentapod equipment created by Mongoose Publishing like the Bishop and the Pentapod Walker and think how can that be used on the Kaefers?) :twisted:

Well I have just finished my first read through.

2. Can a Sling be used to hold a small craft during Interface assuming both the mothership and the small craft have a heatshield. The text doesn't say it won't work but it seems like having it exposed like that should do something.

3. There's a couple of places where the text gives one method of calculation, usually a percentage, but the example uses a different method. It would help if the both used the same method even if the results are identical. For example, again with the Nuclear OMS, the text says power is hull/10 where the example on the next page says hull x 0.1. The result may be the same but honestly, pick to one method of working the the math and stick to it for clarity sake.
S

1. In page 16 it says the Nuclear OMS uses 0.00075% of hull tonnage per burn. In the example for the Kennedy on the next page that burns are equal to 0.01×hull which give vastly different results. And it uses different figures to measure the size of the thruster itself. 2% in the text vs 0.03xhull in the example. Which again give different results.
Click to expand...

The problem I have with this is the use of rounding. If we assume that the stat blocks are meant to be correct then the Kaefer fuel efficiency should be 0.675% and by extension the human fuel efficiency would be 0.75%, which is then being rounded to 1% for the calculation of the Kennedy's stats.
Additionally, when discussing fuel cracking on pages 23 and 24 it states that a fuel cell can be run in reverse and crack fuel at the same rate that it consumes it. Page 23 lists this as 0.0009 tons per hour per Power, page 24 rounds this to 0.001, which means that a fuel cell can crack more fuel than it consumes. In fact the 20 Power fuel cell used as an example can crack 0.48 tons (not 0.4 tons as stated) per day, but only burns 0.432 tons over the same time period for a net gain of 0.048 tons of fuel. Not a lot but if you are going to present numbers in rules to a specific level of precision, then it makes sense to continue to use that same level of precision throughout.

One question I have is around the cost of cockpits. The size and cost of bridges aligns with those found in High Guard, however the Cockpit and Double Cockpit appear to be 10x more expensive than in High Guard. High Guard has them cost Cr10,000 and Cr15,000 respectively, but the AEH has them cost MLv0.1 (Lv100,000) and MLv0.15 (Lv150,000). The question I have is is this increase in cost intentional (and will we see it propogate to High Guard Update 2022)? Or is it a mistake and they (and by extension the Survival Cockpit and Flight Deck) be 10x cheaper?

Staff member
Just to let you all know, we have updated the file for this book - simply download it again for the latest version!
C

What's the relationship between Aerospace Engineers and High Guard?

AH replaces HG for 2300AD in regards to starship and space station construction. 2300 has some significantly different tech assumptions compared to base Traveller and goes in to a lot more detail in regards to heat dissipation, sensor signature, reaction drives and power plants amongst other things. AH also contains info on Belter communities and asteroid mining, skyhooks, laser lift launchers, system drives such as solar sails and ion engines, drone ships and Libertines.
C

Family owned and ran spaceships. Think nomadic spacers like space romany or something and you'll get the idea.
You must log in or register to reply here.