Halloween is approaching soon. You're going to need something particularly scary for your players if you do any gaming near the holiday.

Well, GKG has the answer. On September 7, we will be releasing Hell's Paradise.

This adventure has been run by me for players at many conventions across the eastern United States and this new version of the scenario has been informed by the actions of those players.

Hell's Paradise. Coming on September 7. Just in time for you to get it ready and spring it on your players for Halloween. 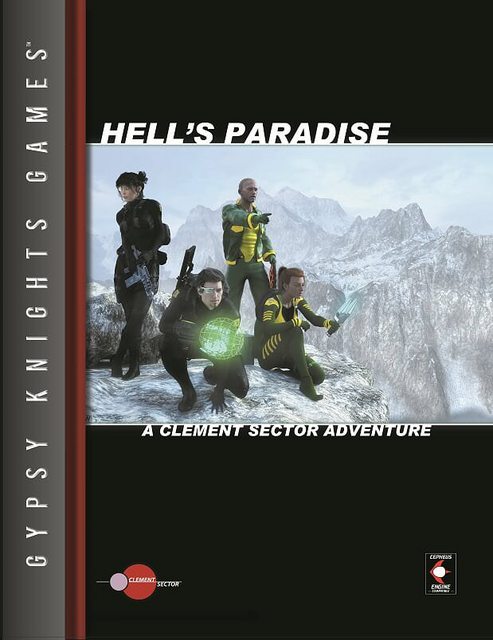 Now available at DTRPG and RPGNow!

TXE-605b, known to some as Calliope, is an untapped planet whose barren surface but breathable atmosphere and abundance of water promises to be an excellent candidate world for colonization. The Nordic Exploratory Service sent an expedition to the TXE-605 system to expand humanity's knowledge of this world. Now their vessel, NESS Arn, has not returned on schedule. The crew of the CCAS Clara Barton, a Cascadia Colonization Authority search and rescue ship, has now been tasked with finding out why the Arn has not come back from TXE-605b. Have they been attacked by pirates? Have they suffered a malfunction? Or is it something far more sinister?

Hell's Paradise is an exciting adventure filled with danger and intrigue. It comes with nine pre-generated characters, the stats and deckplans for Clara Barton, a Trailblazer-class ship used by the CCA. In addition, it also features maps of TXE-605b and the overall TXE-605 system as well as deckplans for the NESS Arn.

Although Hell's Paradise can be modified for use in any science fiction setting, it is made with our Clement Sector setting in mind. It will be helpful for the Referee to be familiar with the Clement Sector Core Setting Book and Unmerciful Frontier: The CCA Sourcebook to get the best use of this product.

If you're looking for a Halloween science fiction adventure to run this weekend, you can't go wrong with Hell's Paradise. This is an adventure written by George Ebersole for our MgT 1e version of Clement Sector and it was a big hit at many conventions since then. We've since revamped it, made it compatible with Cepheus Engine/Clement Sector: The Rules, and it's available once again.

Currently, it's 31% off at DTRPG as part of their Halloween Horror Sale. You can get a copy at this link: https://www.drivethrurpg.com/product/25 ... s-Paradise

Of course, you don't have to take my word for it. You can go over to Alegis Downport and read what Steve had to say about it on his blog at this link: https://alegisdownport.wordpress.com/20 ... on-review/

Or, if you're in the Chattanooga, TN area, you can come out to Epikos Midtown on Saturday. I'll be running Hell's Paradise as part of their Halloween Comic Fest. Game begins at 1pm and I'll be around until 5pm selling and signing books. You can find out more about this event here: https://www.facebook.com/events/428093910933351/
John Watts
Independence Games