Probably not, its not the best way to mine the Sun in any event. The best way to mine the sun is to use its energy to create magnetic fields and cause coronal ejections which then can be mined for its resources. You can move most of its mass that way and deposit it in another place, thereby creating another star, and thus extending the life of the Sun in the process. The Sun does not convect the material in its core, so when its core runs out of hydrogen to fuse into helium, the Sun heats up due to contraction of the core and then begins to fuse helium into carbon at a much higher temperature, this causes the Sun's outer layer to expand and go into its red giant phase. But if you turn the Sun inside out by peeling away its outer layers and exposing the core. You create another Sun with a hydrogen core, and you can deposit the remainder of the old Sun into the new Sun that you created and you get another 10 billion years of main sequence for the new Sun by turning it inside out. The Sun can probably last 100 billion years if you do this repeatedly about every 5 billion years or so.

But we have gone far afield. I'm talking about creating a pseudo-fantasy world out of Venus, using Jupiter's Moon Io as a standin for Earth's Moon around Venus, put it into a wider orbit around the Sun so it doesn't eventually collide with the Earth, and leaving a thicker atmosphere and enhanced greenhouse effect on Venus to compensate for its further distance from the Sun. The Sun then appears slightly dimmer and smaller as seen from Venus as from Earth, but not very noticible unless one does careful measurements of the Sun's angular diameter. This Venus has a longer year than Earth's, About 15 months long instead of 12 and a year that lasts 450 days, a red volcanic moon that cycles through its phases once every 30 days. Since all of this is artificially arranged with Earthlike days we get a standard fantasy world with 12 intelligent humanoid races with two main continents Ishtar and Aphrodite. Aphrodite is the one where most of the large dinosaurs inhabit, Ishtar has a climate resembling Europe and similar flora and fauna to Europe as well. These Venusians have a technological level similar to Earth's Rennassance. The magic here is psionic, the currency is based on precious metals with an exchange rate of 1 platinum piece = 10 gold pieces, - 100 silver pieces = Cr100 = 1000 coper pieces, and 1 standard gold piece weight is 10 grams which make 100 such coins weigh 1 kilogram. So basically I am creating an environment that looks at first glance like a typical D&D world, but with technological relics substituting for magic items, and a gateway to the past, hence an entry into the classic Traveller campaign. The history of this Venus follows that of Traveller up to the New Era setting, only there is no 4th Imperium, the Virus becomes the dominant life form in the galaxy, most of mankind based in nongarden worlds has perished as the Virus has hijacked the technology required to keep biological lifeforms alive in those environments. The Virus has over the last 5000 years evolved into something else, most of it has passed on to another universe leaving mankind and other sentient races behind with left over technology, some of which still works. One item is a stargate which connects to Prometheus in the Alpha Centauri system 5000 years ago.
Top This is a rough draft, a sort "training wheels" for introducing primitive TL2-3 characters to the high tech setting of classic traveler. The environments of this future Venus is similar to the planet Prometheus except that Prometheus is a bit drier and has less water surface and slightly lower gravity than does Venus. Prometheus has 7/8ths of an Earth gravity while Venus has 9/10ths of an Earth's gravity. Basically this dungeon is going to be stocked with non-magical low level monsters translated to Traveller, and we'll see how TL2-3 Travellers survive in this environment before exiting through the gate to the high tech side onto the surface of Prometheus, with their gathered loot for conversion into credits for making initial purchases of equipment.
Top

Give the Vargr Drow personalities; or Druchii or Drukhari.

That will up the stakes in the Marches; plus, they have distinctive psionic subspecies.
Top

That will up the stakes in the Marches; plus, they have distinctive psionic subspecies. 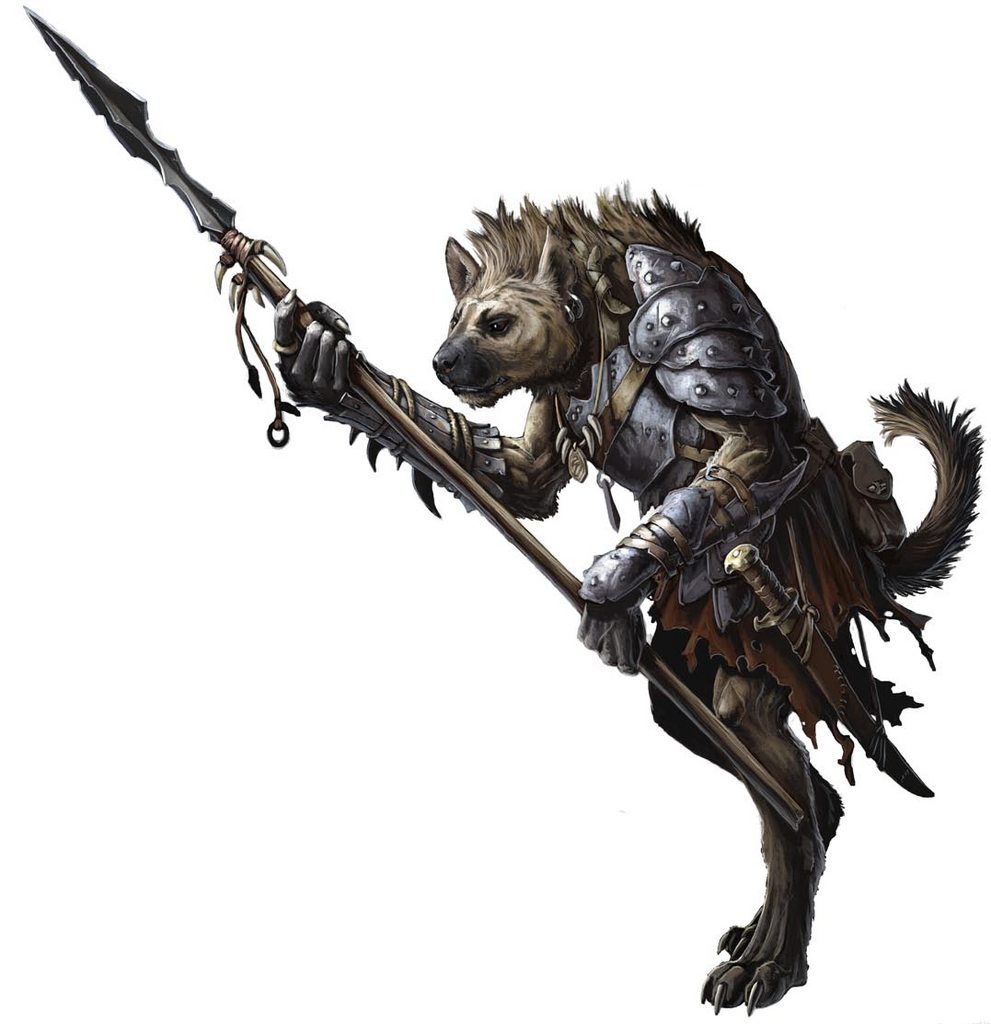 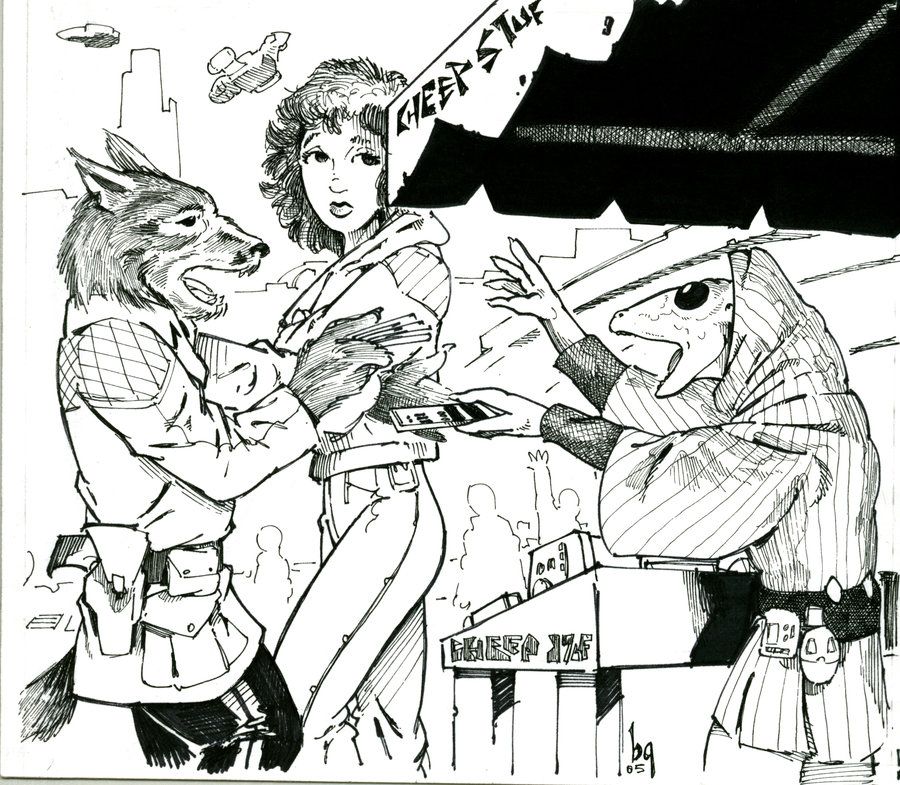 Looking over the gnoll write up, they would be the stuff of nightmares for vargr and other races. They would make an excellent horror antagonist. They are strong and tough but their claim to fame is how vicious they are while being intelligent. They could be a native species on a world with a particularly wild and dangerous environment and life or they might have been a gruesome Ancient experiment seeded on one or more worlds. They're primitive and feral hordes living for plunder and slaughter.

Can you imagine someone gathering them to use as shock value on other worlds.
Top

Reynard wrote: ↑
Sun Jul 08, 2018 4:49 pm
Looking over the gnoll write up, they would be the stuff of nightmares for vargr and other races. They would make an excellent horror antagonist. They are strong and tough but their claim to fame is how vicious they are while being intelligent. They could be a native species on a world with a particularly wild and dangerous environment and life or they might have been a gruesome Ancient experiment seeded on one or more worlds. They're primitive and feral hordes living for plunder and slaughter.

Can you imagine someone gathering them to use as shock value on other worlds.

They appear to be part Hyena instead of part Wolf, they could be uplifted Terran stock, maybe a prototype leading up to the Vargr.

Here is my Dungeon complex with numbers by the way. One of the numbered areas contains the gate to Prometheus 0407 A785969-E Sol Subsector, Solomani Rim. As you can see it has a similar population as Earth does today, unlike Earth of today, it has a single unified government under the control of the Third Imperium. A gateway back to Venus, about 5000 years further into the future and with a primitive population base presents some interesting opportunities for Prometheans that maybe chafe under Imperial rule. For instance, they could step through the gate, and there is no Imperium here, just a bunch of TL 2 primitives of a dozen different races, only one of them are human. How will Solomani stock Prometheans and the Natives of this future terraformed Venus get along? What would happen exactly if some Solomani movement types discover this gate deep in the jungles of Prometheus, and try to keep its existance secret from the Imperium Military government? What would happen if the Imperium eventually discovers it, and there are a number of Solomani colonies already set up on Venus, what would they do about that?
Top

Your image does not show, perhaps because it is not a jpg. I also tried going to the site and got nothing but gibberish, so I don't know what you are trying to communicate.
Top

I use a Chrome variant, and since I believe that Google developed webp, probably the reason I can see it, since it didn't appear to appear on Edge or Firefox when I checked.

Here is my first player character converted to Traveller for playtesting purposes. I forgot to give him weapons skills in making this conversion.
Top

Here is the corrected Player character. I have given him skills in blade, bludgeon, and gun combat (archaic) of 1 each, probably more than he deserves as a character converted from 1st level, but he is a professional fighter and he is 30 years old, so he has experience, and characters in Traveller don't have levels, so I decided to give him a break. My guess is he probably requires a pack mule to carry all of his stuff. He should carry his armor, his broadsword, his longbow and 20 arrows personally, he also wears his clothes, and has a belt pouch which can carry up to 3 kg of coins which is about 300 coin weights. Everything else goes on the pack mule. This is a total of 14 kilograms, and the pack mule carries the remaining 25 kilograms of his equipment.
Top This is kind of necessary in order for characters to survive this Dungeon and find the gate. Since the higher power does not exist on the other side of the gate, they last 24 hours after the character steps through the gate and then disappear, the character has to then step back within range of the gate, as per the power Mind Link to recontract the higher power in order to access any of these powers again. The higher power appears to originate within the planet Venus itself. Since on Venus the planet is always within 5 kilometers of the user, this is not a problem on the Venus side of the Gate, but from the Prometheus side of the Gate, one needs to be 5 kilometers of it to contact the higher power on the other side.

A very powerful psionic creature is providing these psionic powers to its clerics, it might be a highly advanced computer built into the planet's crust at the time it was terraformed.

Here is an equivalent to a Dwarven 1st level Cleric Although there are no levels in this game, I have given him made up psionic powers granted to him through his Mind Link with the Higher Power that is a computer representation of a Greek Deity Aphrodite, The planet Venus has a giant computer built into its crust running on geothermal energy creating the mind and psionic powers of this deity, and it controls an avatar robot in the shape of a beautiful human woman as shown in the previous posting.
Top
Post Reply
35 posts

Users browsing this forum: No registered users and 55 guests