It is magic, and probably requires technology way more advanced than level eight or nine.

The Honorverse cheats by externalizing the process, and Traveller just takes it for granted ala Star Trek, though the hologram deck may give an inkling how one variant may be individually focussed micro tractor and repulsor beams.

The lack of details on inertial compensators makes the design of spaceships a somewhat haphazard process, since performance may be unrealistic, in at least the relationship to the technological level of equipment installed and/or default construction.

In other words, the more compensation needed, the technological level and costs involved become a death spiral of diminishing returns, which explains why commercial ships tend to stick to minimal compensation.
Top 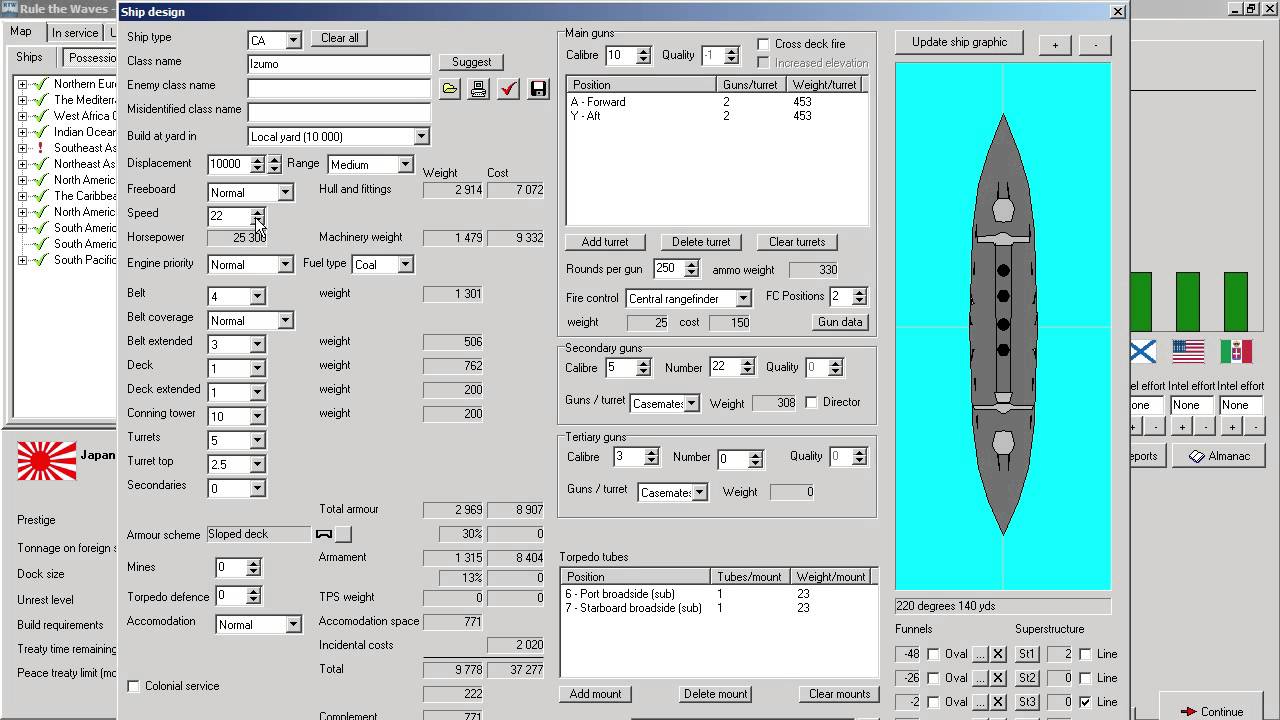 This is a neat little computer game that seems doomed to perpetual beta testing.

What I discovered about the Royal Navy is, that unless you get trapped in a long term naval arms limitations treaty, it's pointless to rebuild (and upgrade) your existing ships, since you have more than enough money to launch bigger and better ones, in terms of cost benefit.

I had turn of the century vintage minimal armoured cruisers and maximally outfitted battleships until (currently March nineteen thirty) just to keep up the numbers on colonial duties, though I did have several goes at upgrading individual ships to see whether it was worth it.

Might be a different story with the lesser powers
Top

I tend to equate the five hundred tonne bay with six inchers, so a subsidized merchant could have a narrowish cargo bay, where installation of a weapon system would be geared to.
Top

6" guns are more like small bays as the large bays are more like 10"-12" guns. ( Spinal weapons have no real equivalents until the keel breaking torpedoes make it to field.)
Top

I tend to view the meson gun as more of a torpedo equivalent.
Top

So the Kaiser orders three more battleships, battlecruisers and.or dreadnoughts, which I'm not ready to commit to yet.

So I design the most minimalistic predreadnought battleship, which turns out to be a single gunned seven incher weighing in at fifty one hundred tonnes.

It's clear that you need at least a spinal mount and relatively hefty protection, and increased hit points at hundred thousand tonnes seems to indicate a starting point, with ten to fifteen, possibly twenty, thousand tonne spinal mount, though it could be easier just having a targetted damage factor.
Top

I tend to equate the five hundred tonne bay with six inchers, so a subsidized merchant could have a narrowish cargo bay, where installation of a weapon system would be geared to.

Actually they usually just removed the armament and returned the ship to normal freight service. Both the Brits and the Germans (and others) armed standard merchant ships, but they also built Q-ships and armed merchant cruisers. Q-ships were heavily armed merchants, and some of the cruisers mounted 6" guns. As far as I recall, the remaining armed cruisers had smaller guns and those weapons were meant for defense. Q-ships and armed merchant cruisers employed their weapons offensively. Like the Kormoran sinking the light cruiser Sydney by luring them in close.
Top

Could be because I never prioritize research on that subject, Q ships turn up rather late in my timelines.

Five hundred tonne weapon bays have to be an odd shape, and would make it easily identified as a preprepped platform.

Depending on the era, you could have protected cruisers (and armoured ones) with casemated six inchers, to the twelve gunned variants in double or triple turrets like the Worcesters.

Considering the effect, bays would be batteries compared to the less hardened single guns that you could only install on commercial ships.

Since I try to reconcile Solomanic canon, they'd define light cruisers as being armed with five hundred tonne bays, or maybe we'd downgrade it a bit to protected cruiser, and leave the definition of an actual light cruiser as requiring a spinal mount.

As for the Sydney, I think the consensus is the silly bugger allowed himself to move too close to the Kormorran, instead of sending over a boarding party.
Top

Also, since you have to sell off the armed merchant cruisers after the conflict has ended, in this game fairly guaranteed to last quite a while, compared to real life crises that might be over in six months, you'd want to get as many in as early as possible to maximize your return on investment, though again in reallife, you have to balance that out in terms of disrupting your trade and economy.

As we can see from the big fast passenger liners actual armed merchant cruisers have an optimal size for the missions they'll be tasked with, whereas you can commandeer the fast passenger liners for what they do best, transferring vast numbers of people quickly and safely to staging areas.
Top

Now imagine that grav plates are embedded on the lid, the object would remain on the lid whether horizontal or at a right angle.

Drop a smallcraft on it, and winch it from the interior hangar deck to the exterior flight deck, removing the need for an elevator.
Top

Which complicates the process as you're dealing with having to deal with reorienting the craft into the winch system, whereas a standard elevator only needs to deal with the movement between floors.
Top

Imagine embedding the grab plates on the hull at one eight degrees to the interior of spaceship.

That means you could drive the smallcraft in the hangar to a section of the floor, secure it, and just flip it over, to be now on the flight deck on the outside of the hull.
Top

For the past two days, passengers passing through Helsinki airport may have wondered whether their airline is suffering from weight issues.
At check-in, Finnair staff have been asking them to please step briefly on to a set of weighing scales.
But this isn't a new "thin air" strategy to slim down the cargo.
The airline is surveying customers to check that the estimates it has been using to calculate total weight, fuel and safety are accurate.
"Airlines know what the aircraft weighs, what the check-in luggage weighs, but not what passengers weigh," said Päivyt Tallqvist, communications director at Finnair.
So far, they have found 180 volunteers willing to weigh in, complete with carry-on luggage. They need a total of 2,000 to accurately understand their regular payloads, said Ms Tallqvist.
Until now, Finnair has, like most airlines, been using European Aviation Safety Agency (EASA) passenger standard weight estimates, which put a male's weight at 84.6kg, a female passenger at 66.5kg and the average under-12 at 30.7kg.
But the EASA found those averages hide a range of variables: men travelling first class tend to weigh more than those in economy, while for women the reverse is true. The average hand luggage is 6.1kg, but that average falls significantly in the summer and men carry on heavier items than women.

So Finnair is keen to survey the mix of air travellers specific to their airline.
As well as flying Finns in and out of their home country, the airline offers transfers between Asian and European destinations, and they suspect that the combination of tall Finnish men in winter coats, long-haul travellers from East Asia and daily business travellers around Finland will add up to different set of average outcomes.
Finnair is looking for more volunteers to be weighed over the winter months. Then they'll recommence in the spring, when travellers have stripped down to their lighter season togs.

One question is whether basing the data on those happy to step up might skew the results.
"That's a question a lot of people have asked," said Ms Tallqvist. But she doesn't think it will pose a problem.
"We found yesterday and today we had people of all shapes and sizes. We had Finnish and Asian customers, we had a variety of male and female and of different sizes."
In recent years, other airlines have begun to look at the variation in passenger weight.
In 2013, Samoa Air controversially became the first airline to charge passengers by the kilo rather than per person.
Travellers hold strong opinions on both sides of the argument whether treating heavier passengers differently is fair. But Finnair says that is certainly not what they are considering.
"That has been a concern that some people have raised," says Ms Tallqvist.
"For us, this has nothing to do with ticket pricing or anything like that."

How big are low berths?
Top

If they can't fit in a low berth than its fast drug and freight.
Top

Passenger volume would indicate more quantity of drugs to gain the same effect.

Or less, with a danger of overdose.
Top

With it's capability to bypass most armour, could be meson lite.

This could resolve the dilemma of High Guard meson bay equipped Imperium Navy ships, by retconning them with Tachyon Cannons.
Top

Condottiere wrote: ↑
Thu Dec 07, 2017 7:41 am
This could resolve the dilemma of High Guard meson bay equipped Imperium Navy ships, by retconning them with Tachyon Cannons.

Except that tachyon cannons aren't standard OTU either...
Top

But... tachyon cannons, unlike meson, are listed among the standard weapons in High Guard? Sure, they’re not a classic weapon, but...

Eh, doesn’t matter - it’s my playground and I’ll do what I want to

It's an important distinction.

Are meson bay guns can(n)on in the Third Imperium setting?

Under High Technology, that could make them as rare as Collectors.

Standard would make them available to everyone.
Top
Post Reply
3175 posts

Users browsing this forum: No registered users and 43 guests