If I had to list the features that define this as a warship type, I'd go with one to two killotonnes, with a minimum acceleration of five, and at least one bay weapon.

Optimally, it would be below two kilotonnes to take advantage of the smaller size; above that, destroyers would be more interested in immunity from turret and barbette criticals.
Top

Prototypes should have quirks, but they may carry over to the actual production design.

From a design perspective, we're only interested in quirks in how much bang for a buck they bring, though the roleplaying aspect, especially for the ones that don't directly effect operating cost like being fuel inefficient, could be quite entertaining; like someone decided to simplify plumbing, and it all originates from a central pipe, in the centre of the ship, so the flush toilets, the showers, the laundry and the kitchen are all clustered around that.
Top

It's difficult for a spaceship to sink in space.

It continues to float with any number of holes in it.

Since you can't deactivate the fusion reactor magnetic bottles to let it blow up, to deny it's capture by the enemy, you're going to have to emplace scuttling charges, if you can't propel it into the nearest gravitational well.
Top

Inspiration: Lasers Are Great, But Diamond Superlasers Are Better, Here's Why

Thank you for posting that link to Isaac Arthur's YouTube channel.

I have now watched almost a days worth and I must day it is good stuff - the real science behind many science fiction ideas.

I try to bring to the surface stuff that I find interesting and/or relevant.
Top

Diagram showing various forms of ionizing radiation, and the sort of material that is used to stop or reduce that type.

The total absorption coefficient of lead (atomic number 82) for gamma rays, plotted versus gamma energy, and the contributions by the three effects. Here, the photoelectric effect dominates at low energy. Above 5 MeV, pair production starts to dominate.

Shielding reduces the intensity of radiation depending on the thickness. This is an exponential relationship with gradually diminishing effect as equal slices of shielding material are added. A quantity known as the halving-thicknesses is used to calculate this. For example, a practical shield in a fallout shelter with ten halving-thicknesses of packed dirt, which is roughly 115 cm (3 ft 9 in) reduces gamma rays to 1/1024 of their original intensity (i.e. 1/210).

The effectiveness of a shielding material in general increases with its atomic number, called Z, except for neutron shielding which is more readily shielded by the likes of neutron absorbers and moderators such as compounds of boron e.g. boric acid, cadmium, carbon and hydrogen respectively.
Graded-Z shielding is a laminate of several materials with different Z values (atomic numbers) designed to protect against ionizing radiation. Compared to single-material shielding, the same mass of graded-Z shielding has been shown to reduce electron penetration over 60%.[16] It is commonly used in satellite-based particle detectors, offering several benefits:

Designs vary, but typically involve a gradient from high-Z (usually tantalum) through successively lower-Z elements such as tin, steel, and copper, usually ending with aluminium. Sometimes even lighter materials such as polypropylene or boron carbide are used. [17][18]

In a typical graded-Z shield, the high-Z layer effectively scatters protons and electrons. It also absorbs gamma rays, which produces X-ray fluorescence. Each subsequent layer absorbs the X-ray fluorescence of the previous material, eventually reducing the energy to a suitable level. Each decrease in energy produces bremsstrahlung and Auger electrons, which are below the detector's energy threshold. Some designs also include an outer layer of aluminium, which may simply be the skin of the satellite. The effectiveness of a material as a biological shield is related to its cross-section for scattering and absorption, and to a first approximation is proportional to the total mass of material per unit area interposed along the line of sight between the radiation source and the region to be protected. Hence, shielding strength or "thickness" is conventionally measured in units of g/cm2. The radiation that manages to get through falls exponentially with the thickness of the shield. In x-ray facilities, walls surrounding the room with the x-ray generator may contain lead sheets, or the plaster may contain barium sulfate. Operators view the target through a leaded glass screen, or if they must remain in the same room as the target, wear lead aprons.

Alpha particles (helium nuclei) are the least penetrating. Even very energetic alpha particles can be stopped by a single sheet of paper.
Beta particles (electrons) are more penetrating, but still can be absorbed by a few millimeters of aluminum. However, in cases where high energy beta particles are emitted shielding must be accomplished with low atomic weight materials, e.g. plastic, wood, water, or acrylic glass (Plexiglas, Lucite).[19] This is to reduce generation of Bremsstrahlung X-rays. In the case of beta+ radiation (positrons), the gamma radiation from the electron-positron annihilation reaction poses additional concern.

Neutron radiation is not as readily absorbed as charged particle radiation, which makes this type highly penetrating. Neutrons are absorbed by nuclei of atoms in a nuclear reaction. This most often creates a secondary radiation hazard, as the absorbing nuclei transmute to the next-heavier isotope, many of which are unstable.

Cosmic radiation is not a common concern, as the Earth's atmosphere absorbs it and the magnetosphere acts as a shield, but it poses a problem for satellites and astronauts. Frequent fliers are also at a slight risk. Cosmic radiation is extremely high energy, and is very penetrating.

Electromagnetic radiation[edit]
Electromagnetic radiation consists of emissions of electromagnetic waves, the properties of which depend on the wavelength.
X-ray and gamma radiation are best absorbed by atoms with heavy nuclei; the heavier the nucleus, the better the absorption. In some special applications, depleted uranium or thorium[20] are used, but lead is much more common; several centimeters are often required. Barium sulfate is used in some applications too. However, when cost is important, almost any material can be used, but it must be far thicker. Most nuclear reactors use thick concrete shields to create a bioshield with a thin water cooled layer of lead on the inside to protect the porous concrete from the coolant inside. The concrete is also made with heavy aggregates, such as Baryte or MagnaDense (Magnetite), to aid in the shielding properties of the concrete. Gamma rays are better absorbed by materials with high atomic numbers and high density, although neither effect is important compared to the total mass per area in the path of the gamma ray.

Ultraviolet (UV) radiation is ionizing in its shortest wavelengths but it is not penetrating, so it can be shielded by thin opaque layers such as sunscreen, clothing, and protective eyewear. Protection from UV is simpler than for the other forms of radiation above, so it is often considered separately.

In some cases, improper shielding can actually make the situation worse, when the radiation interacts with the shielding material and creates secondary radiation that absorbs in the organisms more readily. For example, although high atomic number materials are very effective in shielding photons, using them to shield beta particles may cause higher radiation exposure due to the production of bremsstrahlung x-rays, and hence low atomic number materials are recommended. Also, using material with a high neutron activation cross section to shield neutrons will result in the shielding material itself becoming radioactive and hence more dangerous than if it were not present.

You could probably use the strategic placement of fuel bunkerage to create firebreaks, and internal leadlining of bulkheads.
Top We should try ramming.
Top 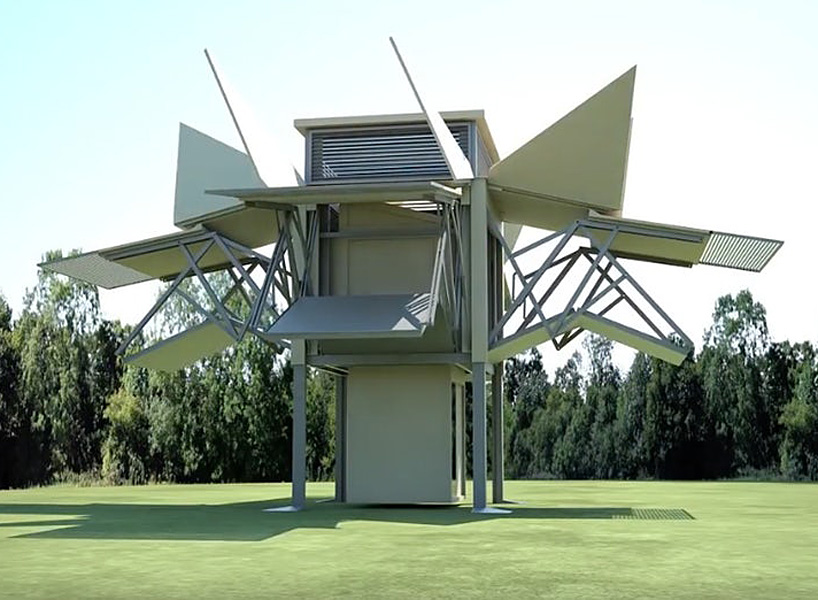 Now you only need to make it vacuum proof.
Top

Spaceships performance is dictated by volume enclosed, not mass, optimal way to create living space until performance becomes an issue, like when jumping.
Top

If the Earth has an orbital speed of thirty kilometres per second, and a diameter of twelve thousand seven hundred forty two kilometres, it would take eleven and three quarters hours to drift trailing to the nearest jump point once you've escaped orbit, and combine that with the accepted one gee acceleration/deacceleration transit time of about six hours, I would suppose that would shorten it to around four hours.
Top 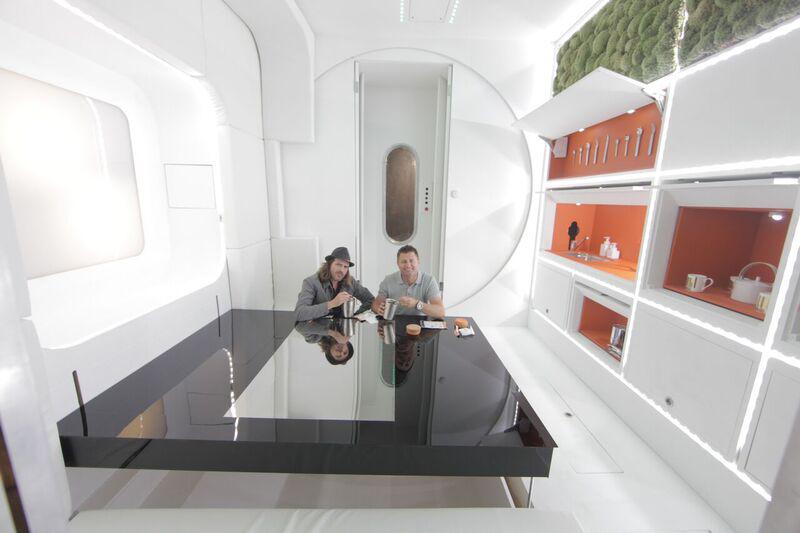 The Rotating House prototype is designed by British architect George Clarke. It weighs 3.5 tonnes and stands 14 feet tall. Clarke wanted to utilize every inch of the space, turning one room into four. The floors can become walls which can become the ceiling, depending on the rotation of the home.

I'm inclined to think it more of a rotating room, and in our case, we could Labyrinth it since we can embed artificial gravity plates on all four walls/floor.

HAVE MIND WILL TRAVEL 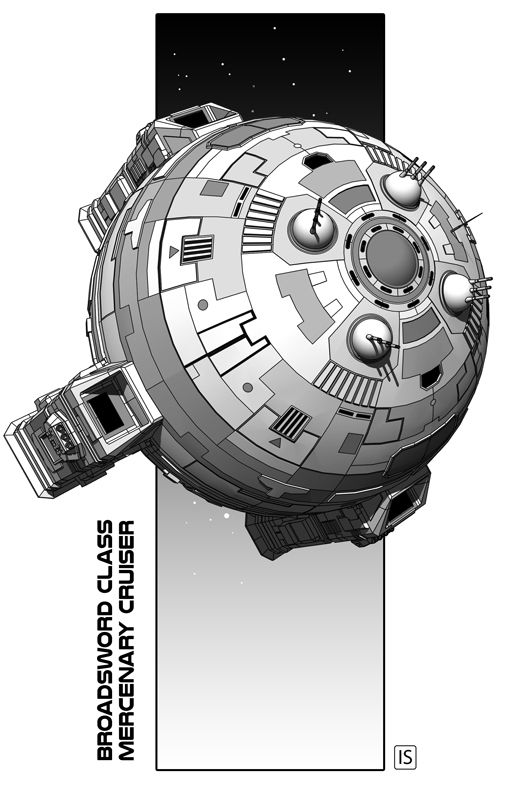 The sphere is the most economical use of space, but since actual thickness of hull and/or armour is irrelevant, makes no difference under current design rules, but it gives you partial streamlining and a twenty percent discount on the hull.

Next step is landing legs: a tripod configuration would be efficient. If you assume that manoeuvre drive are an advanced variant of lifters, you could have a distributed array of three, embedded in each leg.

You'd have a single modular cutter, housed in the centre of the sphere, with the top and bottom open.
Top

Jump nets hark back to an era before there was even a Mongosling.

It was specifically a way to extend a starship's hull jump field to an attached rucksack, at a time when a lanthanum grid girded starship loins to fall down the rabbithole.

As long as material remains within a jump bubble, it doesn't need a jump net to drag it along.

Users browsing this forum: No registered users and 47 guests