There is no such rule in the new edition. Do we apply all the rules from first edition to second edition - or just cherry pick?

Its called inferred from examples provided where no capital ship in the new system has a thrust value over thrust 6, that isn't a cherry pick its what has been presented. You also keep bringing past editions up in discussions so I backed up precedence from the earlier edition.


You have no medium to exchange energy with. As a result ships in space can not bank and turn like aircraft, nor can the suddenly stop and reverse direction - handbrake turn.

Dogfighting is getting into range where a missile exchange would be less than ideal and where maneuver is more important than speed, which doesn't limit itself to a particular medium.

Stop and reversing direction in a spacecraft is rather easy in space unlike air.
Top

To stop and reverse direction you have to completely cancel your current vector.
A space fighter moving at 75km/s 'north' has to apply enough thrust to cancel that before it can move south. You can't just blast across space building up a thrust related vector as you go and suddenly have no vector relative to your target - not physically possible.

Play Triplanetary or Mayday to learn about vector/Newtonian movement
Top

Sigtrygg wrote: ↑ Dogfighting in space under Newtonian physics with 6g+ drives is preposterous, ...

I guess the dogfight rule was added to make fighters viable in space combat, which was rather successful, since many people like fighters.

If you do not like it simply remove the dogfight rule and fighters will cease to be a problem...
Top

Outside of transit you wouldn't want that amount of speed and would start reserving some of your thrust in order to maneuver.
Top

Funny you should mention Elite and Dangerous as I've had that game for awhile.

It also follows the point about differing speeds.

1.) Has maneuver speed, in combat you can slow down to dedicate more thrust to agility.
2.) Transit speed which handles movement in system.
3.) Has a jump mechanic.
Top

Heh. I made my last post while my ship was supercruising across the Alpha Centauri system to a starbase at Proxima Centauri. I truly hate that star system; takes freakin' forever to cross it.

Elite dangerous is a pretty decent Travelleresque MMORPG. Using a Voice Pack with the VoiceAttack voice control system is fun when I get to say "Engage the jump drive!" LOL
Sir Dhaven Hevelin, IOD, Baronet of Fulacin
Owner/Captain - S.S. Warlock

This would be a combination of the Broadsword with one of it's cutters.

A two hundred tonne hull, with a performance of three gees and three parsecs, with a payload of a thirty man platoon, one air/raft, and two all terrain vehicles.

With the engineering compartment limited to thirty five tonnes, the basic crew would be a pilot, a navigator and an engineer, with two gunner positions.

Electronics would be a ten tonne bridge and military sensors.

Sixty one tonnes of fuel, enough for thirty one plus days of operations, and a three parsec drop down the rabbit hole.

Personally, I doubt that the iconic Broadsword is fit for stated purpose in Mongosian space (or Mongooseverse?).

I'm looking at purchase price of about a third of the Broadsword, with a quarter of the firepower and no smallcraft. In theory, you could patrol with the Cutlass, but you aren't likely to catch up with most commercial traffic, and a pirate is likely to be able to outgun you, probably outrun you as well.

Armament mix is divided between a laser and a missile battery, allowing the Cutlass to provide ground support.

If it acted as a straight out dropship, you could retain the spherical configuration, but I thought a neat twist would be to take a standard template, hollow it out and it really does become a commercial cruiser (and possibly a Q ship). 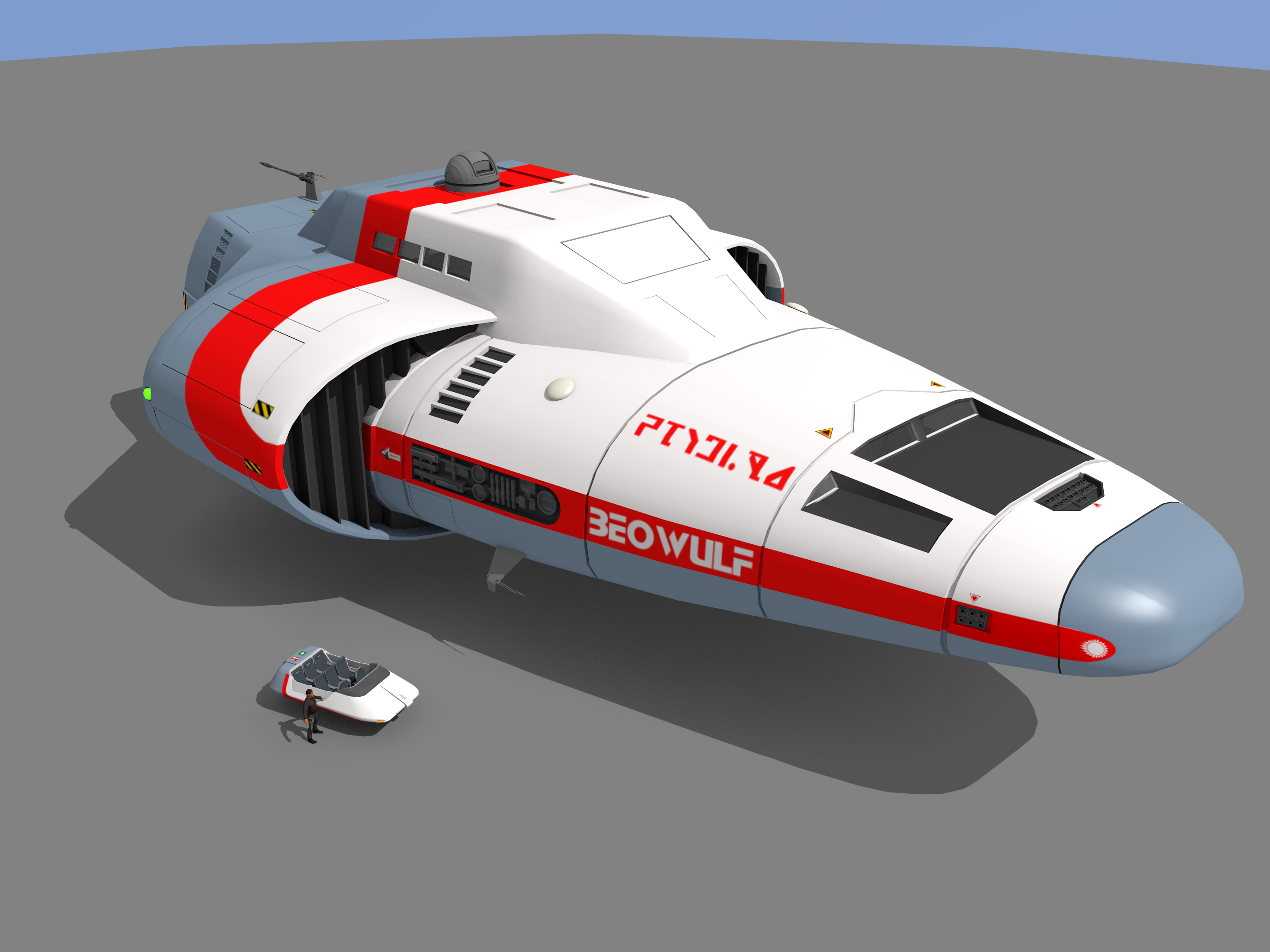 The hull could be built in any technological level ten shipyard, assuming you keep the armour; you could in fact half the armour.

And if you aren't chasing anything, or tagging along as convoy protection, you probably don't need a three parsec range range.

Tl12 is typical commercial hull and TL10 has way too many limits.

Here's a different take on the same setup. 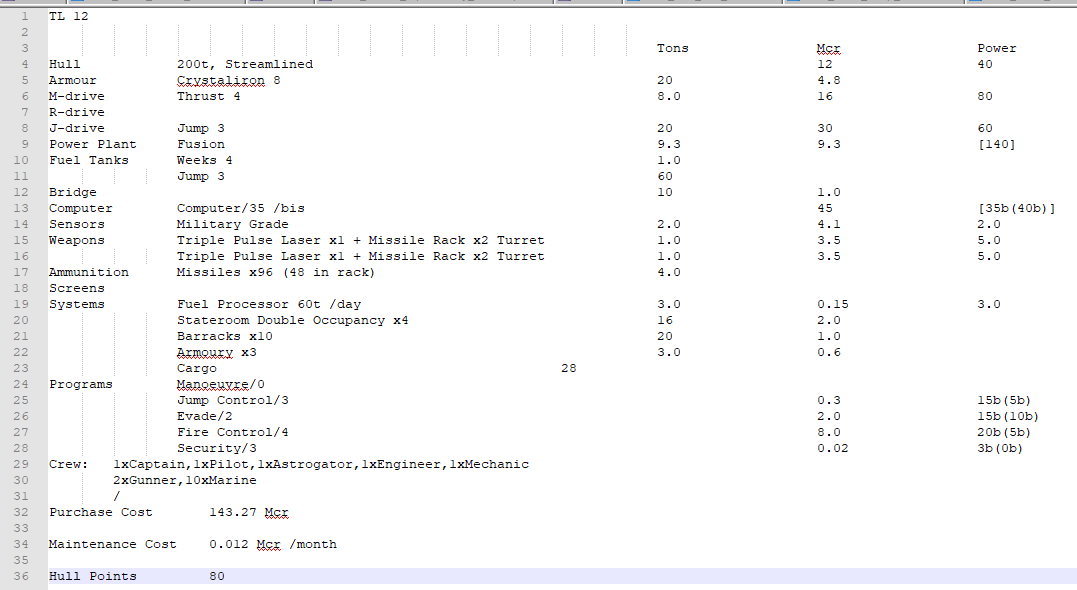 They're default values, rather than optimized ones. I don't think there's a spare kilogramme. I'm sort of feeling my way here.

I allocated four tonnes to the armoury, that would support either twenty marines or eighty crewmembers, not that I think it would be interchangeable.

What it really comes down to is how large a party is or should be feasible. Sure, the Sulaco is huge, but in the end you have a squad of twelve Marines, one android, one supercargo, and one adviser.

You could also crowd in personnel, though that's likely to effect morale over the long term.

A troop transport doesn't have to be fast, nor well armed or protected, just convoyed; the Broadsword is not a troop transport, and I don't think it qualifies as a commando and/or assault platform either.

As for the hull, in theory, sourcing the hull from a lower technologically based spaceyard should be cheaper, if you bear in mind that the default factor zero armoured hull can be technological level seven titanium steel, since it makes no difference in protection, price or performance; nine if you want artificial gravity, and ten for crystalironed on armour plating, since I don't recall any ship having armour factor greater than ten using it.

It should also make hull repair cheaper and easier.

The engines can be manufactured at a higher technological levelled facility.
Top

A long time ago Games Workshop produced a book of ships called the IISS Ship Files for Traveller. In there you will find the Iylvir class IN Light Assault Troop Carrier designed to carry a 28 man marine platoon.
Jump2, m2, 2 turrets, factor 9 hull armour, 28 marines, 4 g-carriers and equipment or 72t cargo.

I'm working with existing templates, and while I don't mind breaking them, I'd like to know what I'm breaking, so I can rationalize it.

Another issue is crewing.

I tend to craft engine sizes to conform with engineer requirements precisely; so, at what tonnage is it a requirement for a spaceship to have an engineer on tap? The scoutship can get away with not having one.

For the mercenary aspect, once negotiations are concluded, how fast would an employer expect their new troops to be deployed? Two parsecs per jump with commercial transport seems about right, whereas having their own duojump ships seems the same speed, the difference is that they don't need to hire or buy passage on commercial shipping, so removing most unexpected, or expected, delays.

Equipment is less likely to be damaged, or subject to inspection by third parties; I'm not sure why they would bother shipping All Terrain Vehicles interstellar distances, except that there are no Toyora pickups at destination.
Top

Thrust 2 and Jump 2 is reasonable for a transport but with it not having an auxiliary to handle landings needs its own defenses. ( Also benefits from higher thrust /jump )

As to engineers, if the craft is going to operate more than 24 hrs at a time than an engineer should be on board but this doesn't mean you need a separate assignment. For example, you can have someone with both the mechanics /engineering skill covering both roles.

Having ones own atvs is useful to have when not on contract and having to move to better employment areas.
Top

I think you may be missing that assembly is not necessarily the same as construction.

Your phone case doesn't necessarily need the same technological finesse to manufacture as the embedded CPU. The hull could be prefabricated, and individual more advanced shipyards could purchase them, and just concentrate on the internal components.

Technological ten hulls would seem ideal as the default commercial platforms, having artificial gravity and a frame which to attach crystaliron armour plating. Any technological level yen shipyard can then fairly easily repair them.

As for onboard terrestrial transport for mercenaries that you schlep across interstellar distances, the air/raft may be ideal.

They are more flexible than an all terrain vehicle, and I suspect you could stuff them together tighter in the cargo hold.
Top

Notice how there is very few designs at TL10 compared to TL12 and how the trader designs as well as the scout are TL12?
Top

You can only speculate, though I'd say part of it was that technological level twelve is recognized as a mature interstellar civilization.

The stated technological level of construction would be more of a cap on how advanced the components available are to the shipyard.

The number of designs listed as standard all center on TL12, which infers that the most common shipyard is TL12 otherwise standard designs would be set at whatever the common tech level would be. Would be more effective to buy a used TL12 ship then buy a new TL10 one.
Top

It's quite possible that most spaceyards are all tooled at technological level twelve, like I think starports probably are.

However, new tooling tends to cost money, and in a lot of cases, electronic companies tend to build new factories to incorporate them, while maintaining the older ones that are specced to older manufacturing processes that then cater to clients and products that don't need cutting edge technology.

There is no stated benefit in building a hull, especially an unarmoured one, higher than default of the stated requirement, as compared to engineering and weapon systems that can be tweaked to take advantage of a higher technological level manufacturing processes.
Top

On the same argument, there is no advantage to building at lower than common TL either. Given that security forces are generally TL13 with the military being at TL15 the tooling costs wouldn't be an issue and appear to have been at TL12 for a significant period of time.
Top
Post Reply
3487 posts

Users browsing this forum: No registered users and 60 guests