Anyone else run into this? I have a player that has saved their money and purchased some tech upgrades.

They have Stat bonus +1
Gun Combat 2: so a +3 to their roll. This is a good base bonus to their combat monkey character. But the tech upgrades add to this.

Intelligent weapon: makes the weapon smart
P-Hud : +1 to attack roll
Smart Tracker: +2 to attack roll once the target has been tagged

So this combines to give a +6 to attack rolls. Even on a roll of 2 they still get an 8. This makes combat pretty terrifying for the other side.
Top 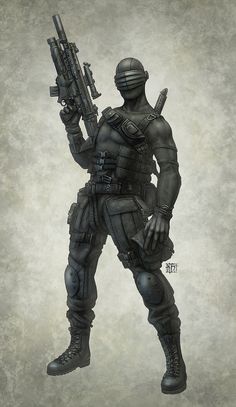 While 8+ is the base difficulty there are some negative dice modifier for speed, cover and range to the target. Small creatures have an additional negative DM for size.
And he gets the DM+6 only with that specific weapon. But a base DM+3 is already quite nice.
Top

Also ratchet up the abilities of the foes. Better armor, better weapons. Better skills - give him a taste of his own medicine.
Top

My issue is the 8+ target number. It belies real life statistics on gun combat. I want to make it 10+, you get +2 with a stationary/unaware target, but not after the enemy has had their initiative moment.
Glen
Top

It's 8 before any modifiers, but if they're in cover (why aren't they, if they're aware?) then you have -2 DM right there.

The problem with raising the base DM is that it will hurt everyone who isn't a specialist. Base DM 10 with -3 for nonproficiency means that they outright *can't* hit a stationary, medium-range target with no cover! Even Stormtroopers aren't (usually) that bad.


Honestly, though, I don't take the the punitive mindset. Being an amazing shot with their signature gun is one of the Cool Things (tm) that PC does. Work with it rather than trying to nerf it.

(Also, you never seem to see the same kind of how-dare-they when it's a skill like Admin or Advocate, even though a really high value there can be far more strategically dangerous...)
Top

Specialization does tend to be (more) in our future.

Reaction would be either to be better trained and shoot first, hit first, detection, outrange, and/or better protection.
Top

You are getting at a problem I have with the Central Supply Catalog, especially as a player-facing resource. Its got some pluses scattered through it that make it too easy for one or two players to be playing a different game than the GM and other players if they're starting from the core rulebook. I dislike that at a meta level, I'd rather have everything on the table from the beginning, and without having to powergame myself to keep up. It might be time to take a look at whether you really want to keep those mechanical options in the game as straight stacking pluses (I really think that +2 should have been +1 on a 2d6 scale, or they could have done something with Boon instead but the numbers were down before Boon was in the game). And if you don't want to remove those, at least take a look at what else is available and come to some decisions about what you're using.

But, you are leaving out some numbers if the player is getting straight to a 2 Can't Miss. Opponents can dodge (and should, rather than stand there and take it), they can dive for cover, they can take cover to begin with, they can wear armor, they can target the most dangerous opponent preferentially to make him dodge and take the penalty to his next attack (and if you take the skill scale seriously, while he doesn't personally have 4-Famous, he certainly has it effectively), they can have smart guns of their own... There's options if you're playing the full game.

And all that said, Traveller combat has traditionally been deadly, over quickly, and more about ambushes, positioning and superior firepower than most other rpgs, so in a broad sense things may be working as intended. As a GM you may have to vary your encounters. More individual combatants, drones or trained animals, a really big alien creature that isn't going down to one or two hits, an ambush, a sniper in an overwatch position, cheap disposable muscle sent in with stunners in a civilized area so if they win they get bailed out and if he wins he gets mindwiped or prison planeted... I'm sure there's more too.
Top

I live in an area with lots of veterans. And yes, a lot of combat veterans. So the back and forth about RPG combat can get pretty stupid.

A couple things to think about:

There is more to combat than just pulling a trigger. The first thing to consider is the recon 'battle'. Who is in the best position to detect who first? Even in the modern era the phrase 'if you can see it, you can kill it' applies. And it is amazing just how many Traveller players put thousands of credits into their guns, but don't own a pair of binoculars [much less a perimeter sensor system].

Skills besides Gun count. Athletics [Dex] allows you to duck for cover. Recon allows you to detect the enemy before they detect you. Tactics gives you a bump to initiative. And skills are more important than gear.

Gunfights have consequences. Just because the world can only manufacture TL 7 goods doesn't mean that they don't have TL 12 crime reduction capabilities. For example, there is a sensor system that cities in the US with high gun violence rates are installing called 'Shot Caller'. It's an acoustic signature system that's installed on street lamps that detects and localizes the sound of gunfire and allows police to respond both more quickly and more accurately than ever before. And that's not even getting into the face recognition stuff that's going on in Great Britain and France. All these technologies can be extended into the future. Audio signature capable to picking up the sound of Gauss weapons, light sensors that can detect laser light frequencies, DNA sequence recognition system for common areas... If you were so inclined, you could make the movie 'V' terrifyingly accurate for your PC's.

And insofar as the murder hobo with starship nonsense goes, most shipping ports routinely check to see if any freighter crews are wanted for questioning before a ship sails. That would be pretty SOP in any Traveller starport of grade C or better.

Now, were I the referee at the table, I would warn the players that they're solving problems with muzzle velocity solutions too often and that they need to start thinking outside that box. And a couple or three session later, the local cops will be waiting for them at the starport gate... "You're one of the few people on this world who is known to own a Gauss rifle, Mr. Eneri. It says so right here on your customs entry form. And oddly enough, there was a long string of Gauss weapon frequency gunfire in Startwon last night..."
"Reputation is what others think they know about you. Honor is what you know about yourself." --Odin, Havamal
Top

For example, there is a sensor system that cities in the US with high gun violence rates are installing called 'Shot Caller'. It's an acoustic signature system that's installed on street lamps that detects and localizes the sound of gunfire and allows police to respond both more quickly and more accurately than ever before.


In case you missed it, there are serious problems with ShotSpotter: https://apnews.com/article/artificial-i ... b54f9b6220
Top

For example, there is a sensor system that cities in the US with high gun violence rates are installing called 'Shot Caller'. It's an acoustic signature system that's installed on street lamps that detects and localizes the sound of gunfire and allows police to respond both more quickly and more accurately than ever before.


In case you missed it, there are serious problems with ShotSpotter: https://apnews.com/article/artificial-i ... b54f9b6220

I'm aware of the issues, from both a technical and civil liberties point of view. But just like with a lot of other technologies, I'm guessing that these problems will get ironed out as the technology matures.
"Reputation is what others think they know about you. Honor is what you know about yourself." --Odin, Havamal
Top

A couple of other things I forgot to add:

1 - Deepfake videos are already hard to spot, and will only become more difficult in the next couple of decades. TL12 deepfakes would be undetectable, in my opinion.

2 - Chameleon technology exists at TL12 that makes armor very hard to detect. I don't know how that works, but I cant imagine it would be difficult to equip cloaks even a hoodie with that kind of tech.

Both of these things would (well, certainly SHOULD) vastly reduce the impact of video / photographic evidence:

Officer Smith "Johnson, we've got you on video firing a Gauss rifle at the Howard Johnson's last Friday night. What do you say to that?"

Johnson: "That's weird. Me and my crew had a BBQ in the hanger that night. Check the cameras."

Now, I don't like murderhobo nonsense, and I wont play with people like that. But playing in a hardcore "V" environment isn't my cup of tea, either.
Top

Likely recordings will have some quantum entanglements that will allow authentication.

Deepfaking will be so sophisticated, that superficially there will be no difference between it and reality.

I think the problem will be second hand, or analogue copies, where the markers wouldn't be present, so it's less of a case of authentication, more that you couldn't beyond a shadow of a doubt.
Top
Post Reply
14 posts • Page 1 of 1