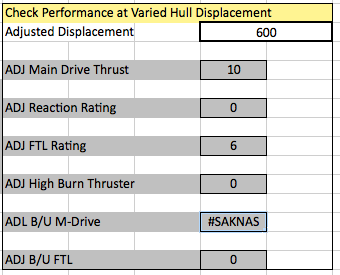 If I add a backup M-drive unused power decreases further:

Presumably we don't use the backup drive and the main drive at the same time?
Top

Arkathan wrote: ↑ What size bay requires ten workers? This is similar to the problem I have with Cannonades.

Yes, it's completely undefined how you unload ships, and how long it takes. Presumably we are not using stevedores carrying sacks on their backs, hence the description of the loading belt doesn't help much.

But it has to be somehow related to the size of the cargo hold? I can't even suggest any specific number of loading belts, so I'm suggesting a configurable quantity of loading belts.

And that's why I suggest 10x 8000 ton bays, linked by partitions in the notes, representing as massive bay that can be broken up and has multiple hatches. Much like the hangars on modern aircraft carriers. When bad things are happening, there are three separate bays, otherwise there is one big one.

This is more an issue of fluff than game mechanics.
Top

Well that's a WTH... it was working before and I don't think I touched it.
Top

Unused is based off Max Load, which is 600K. The yellow just means you cannot power everything. Battle Load shows you can power what you need to use. But if you take one critical on power, you have to power down 4445 points of something.
Top

Power warning. Changed color. Tied one to Max Load and one to Battle Load.

Found and fixed the weeks of fuel problem.

Arkathan wrote: ↑ Unused is based off Max Load, which is 600K. The yellow just means you cannot power everything. Battle Load shows you can power what you need to use. But if you take one critical on power, you have to power down 4445 points of something.

I'm veering into opinion again, but civilian ships rarely need to power all drives at the same time, e.g. M- and J-drive. Normally you only need to power one drive at a time.

In extreme circumstances, e.g. battle, you can reduce Basic Ops power (hull) to half, saving a bit of power plant.

Array cost not multiplied by quantity:

AnotherDilbert wrote: ↑
Tue Jul 27, 2021 9:44 am
Crew calculation not appropriate for a small craft:

Hence accomodation listed as a problem:


Got over being crotchety and fixed it. Only the pilot should appear in the normal slots now for small craft. Use Custom for any other crew.
Round Down for Admin
Marines typed in Custom populate Civ and military, so you do not have to switch modes just for troops.
Also subtracting bridge seats from crew total on small craft.
1 for cockpit
2 for dual cockpit and small bridge
3 for standard and detachable
Note that this does not allow for scheduled passengers in an empty bridge chair, although in RP there is nothing to stop that... besides common sense...
Last edited by Arkathan on Tue Jul 27, 2021 8:58 pm, edited 3 times in total.
Top

I'm veering into opinion again, but civilian ships rarely need to power all drives at the same time, e.g. M- and J-drive. Normally you only need to power one drive at a time.

I use conservative numbers. I am from the school that has me freaking out when design capacity is less than 150% of what's needed.
Since those don't do anything but put color on the page, it's just an annoyance if you don't like nag warnings.
But it is more info.
I'll look into reducing the Basic part of the Battle Load, though... edit: done now, actually

Later, once the main sheet... works... I can, perhaps, look into figuring out how to set a dropdown to configure what setpoints the user wants on power warnings.
Top

Sensor QTY - Done, and you cannot put more than one free, no mass Basic Sensor on the ship.


Small craft partical barbette and any other weapon is back to .75x power again.
Will take some work to add in a pop-up turret, because forced dynamic validation tables... so maybe tomorrow.
Top

The smaller small weapons cost 1000 Cr per space to mount. I'm going with that for the larger ones.
The user will have to determine how many turrets they need and the number of spaces the weapons take up.
Top

That one appears to be sorted now.
Top

Seating for bridges are not defined, and I leave it undefined in my spreadsheet, but I assume two seats for a 3 Dt bridge. It's barely larger than a dual cockpit but contains room to move and better life-support.

A 6 Dt bridge should have "sufficient" seating for a small craft, perhaps four or so...
Top
Post Reply
267 posts

Users browsing this forum: No registered users and 41 guests