phavoc wrote: ↑
Mon Feb 03, 2020 6:24 pm
Along the elliptic means it will orbit in roughly the same process as the planets do. Above/below means that travel will, generally, be more efficient (assuming you are above/below the star) to all points in the system. Or at least you start equidistant.

I guess I’m not following you, or I just don’t know orbital mechanics.

Using our solar system, 1000D from the sun puts you roughly at Saturn’s orbit. The starport could be close to saturn on the same orbital path. Being close is efficient, to use it as a hydrogen and ice source for its own processors to sell to starships.

Assuming the port needs a source of hydrogen for processing, wouldn’t be most efficient to be on the elliptic, close to a source? anything off the elliptic puts you on average farther away, does it not?
Top

Old School wrote: ↑ I disagree on the high g aspect. Going from 1G acceleration to 4G only cuts your travel time in half. Most freight isn’t going to be worth it.

So, unless 4 G makes the ship twice as expensive, it is likely more profitable. 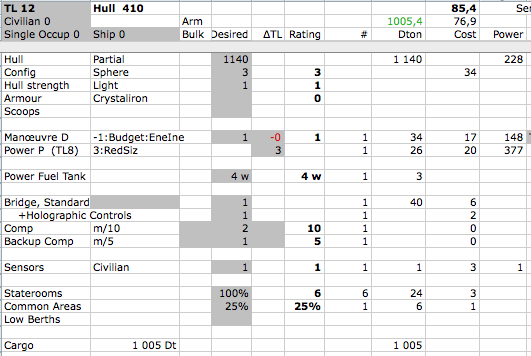 Compare with a 4 G version, still with 1000 Dt payload, so a little bigger: 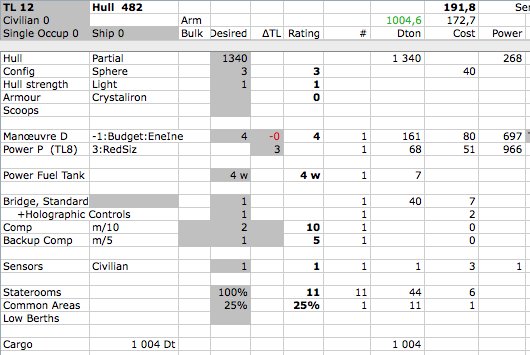 Under these assumptions the 4 G ship is more than twice as expensive, so 1 G will be cheaper per ton of transported cargo.

The key thing is the lack of inertial screening. A ship making a 4G 'run' from 1000D limit to mainworld over several days is not really survivable for a human crew; under normal circumstances you'll be limited to either 1G continuous or else brief periods of high-burn acceleration (the latter especially in combat). Otherwise, for quick turnarounds, you're limited to unmanned ships (or even just cargo containers 'thrown' ballistically!) and bulk cargo.

If you're having to haul stuff to keep the 'port' functional then turnaround time - and hence capacity of a given fleet- will be a huge deal. This is more an issue where a station doesn't have a nearby piece of real estate with a hydrogen supply.


guess I’m not following you, or I just don’t know orbital mechanics.

If your 'port' is at the 'top' or 'bottom' of a star system, you will never be in a situation where you're arriving on the wrong side of the star to your destination world. As noted, that's not an issue if you can jump 'over' the shadow.
Understand that I'm not advocating violence.
I'm just saying that it's highly effective and I strongly recommend using it.
Top

Sorry, I missed the no inertial compensators bit.

Old School wrote: ↑ Even using standard rules, the ship cost per ton of cargo is a wash. Not to mention the difficulty on the crew of a full 4G burn for a couple of weeks at a time. Would be hard on the cargo, as well.

Quite, but a 2 G ship would be cheaper (slightly) per Dt cargo than 1 G, and might even be survivable.

If 4 G ships really were cheaper it would make even more sense to automate them.

I doubt most cargoes will mind a few Gs, we are hardly shipping fresh fruit interstellar.
Top

Been thinking more about the mechanics of avoiding patrol ships, such as after a pirate raid. If your drive plume can be spotted from most anywhere, that's going to be tough. How long can you burn before someone's sensors can determine your direction? Not very long I'm guessing. So either a very long trip on the float, or your burn hard for a while, then use auxiliary thrusters to modify your course so the pursuing ships don't know your exact heading (then still along trip on the float). That might work to escape the net of patrol ships closing in over a course of a day or more, but it probably wouldn't work to go anywhere specific, as your options will be limited by your initial burn. So any known destination, the patrols will likely be waiting for you. We can always have a system that just abstracts whether you get away undetected, but the narrative needs to make some sense. This part needs some work to be playable.
Top

Been thinking more about the mechanics of avoiding patrol ships, such as after a pirate raid. If your drive plume can be spotted from most anywhere, that's going to be tough. How long can you burn before someone's sensors can determine your direction? Not very long I'm guessing. So either a very long trip on the float, or your burn hard for a while, then use auxiliary thrusters to modify your course so the pursuing ships don't know your exact heading (then still along trip on the float). So any known destination, the patrols will likely be waiting for you. We can always have a system that just abstracts whether you get away undetected, but the narrative needs to make some sense. This part needs some work to be playable.

Indeed.
I would say there are basically three levels of detection you need to have an estimate for:

1) Energy Output which results in you being "spotted"

This means "if the opponent is not aware you are there". If you've launched from a carrier which jumped in out-system and have been silent running on passive sensors the whole way (one nice thing with main drives being obvious is that passive sensors are good enough to plot intercepts with). Closing to intercept, your target gets regular checks to see if you're spotted, and the higher or lower your thrust the greater the check difficulty varies off the basic roll. I would say you'd make this check either once an hour or each time you change range band relative to the target.

Note that if overhauling from astern, you'll have to be doing at least the thrust of the ship you're chasing; even if you're only closing at an effective 0.5 G, you're putting out a 1.5 G drive plume behind you.

Frankly, I'd suggest anything above a 1G burn is going to be spotted within a few rounds by basically everyone close enough to give a damn about it. You might be able to hide your drive plume from someone you're overhauling because the ship itself blocks a lot of the radiated energy, but that's (a) an imperfect solution as it'll spread out fairly fast and (b) assumes no-one else who does see you tells them about you.

2) Energy Output which results in you being "tracked"

Pretty much exactly as before, but when the target is actively looking for you. If you go 'dark', but they know where you did that, then the threshold for them spotting you again when they're using more sensitive 'tracking' instead of 'search' sensors is going to be much lower, as the sensors are lavishing greater sensor exposure time and processing power on each 'frame' in the relatively narrow field of view near where you dropped out of sight instead of sweeping a continuous 360' x 360' pattern.

This is going to be a lot tougher. Basically, you're making a check every round you fire the drives. 'Cold' thrusters are possible - something like vapourising LHyd is going to have far less of a heat trail - and if you want to put out any meaningful acceleration whilst 'dark' is probably a required choice.

3) Energy Output which results in an "accurate plot"

Just because you can go "there's a ship there" doesn't mean you've got an accurate value for its acceleration and heading. This will be a bit more forgiving than being 'tracked' - so if you do a fast burn for a few minutes to get out of range, they're still following. You go 'dark' but coast - they can follow (at range) because they know your heading when you cut your drive.
If you fire thrusters, they may or may not pick it up, but the odds are that over, say, half an hour of continuous burns, they will probably spot one or two burns. That means they know you're still there and roughly which way you're going. Only if they spot, say, three on the trot, do they have an accurate bearing on you again, at which point they can fire at you and you need to lose them again from scratch.

This would require X 'track' failures within Y rounds - with the difficulty reduced according to the duration of the burn and the range.

As to figuring out where you're heading; if you are heading towards an obvious world, then yes. They can accelerate continuously and you can't - there's no way to get there first. But I would assume you would never accelerate directly towards your ultimate destination if fleeing under stealth....
Understand that I'm not advocating violence.
I'm just saying that it's highly effective and I strongly recommend using it.
Top

locarno - lots of good stuff to unpack there, thanks! I agree with your overall points. I’m looking for a system where the sensor rules make sense despite the obvious handwavium of the drives. Not sure where I read this, but the applicable point is “if you want me to believe in dragons, get the horses right.” No good if that realism makes the system a bore or a chore, however.
Top
Post Reply
27 posts

Users browsing this forum: No registered users and 17 guests