The Relic: Now Available on Roll20

The Relic: Now Available on Roll20 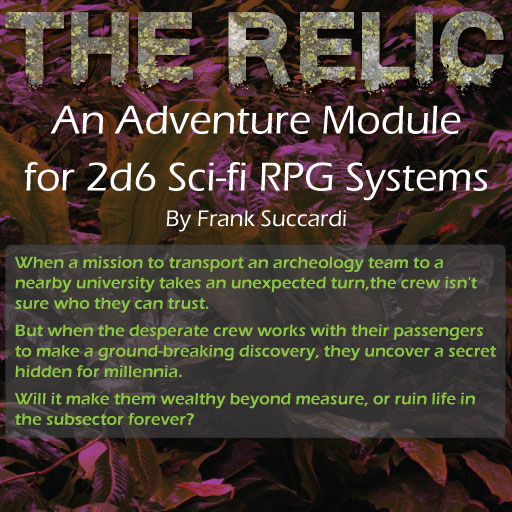 Out here in the furthest reaches of charted space, it’s tough to make a living.

You take what you can get and hope for the best.

If you can land a job with one of the megacorporations in the subsector, you can find steady, unappreciated work. If you’re an independent contractor, you take the jobs you want but money can get a little tight.

Thankfully, an opportunity just knocked: an easy and profitable transport mission just fell in your lap.
--------------------------
When a mission to transport an archeology team and their cargo to a nearby university takes an unexpected turn, the crew isn’t sure who they can trust.

But when the desperate crew works with their passengers to make a ground-breaking discovery they uncover a secret hidden for millennia.

Will it make them fabulously wealthy, or change life in the subsector forever?

Find out now in The Relic, an adventure module for 2d6 sci-fi RPG systems.

Featuring:
Be the first to discover The Relic.
Available NOW in the Roll20 Marketplace.
http://bit.ly/The-Relic-Roll20
My Line of Sci-fi RPG Sourcebooks
Traveller RPG Headquarters on Facebook
About Me (Would You Like To Know More?)
Top

Re: The Relic: Now Available on Roll20

Merry Christmas and Happy Holidays, whatever you celebrate on your homeworld!

Here's a little bonus to get you from Jump Point A to Jump Point B:
Classic Free Trader Deck Plans for Roll20 
Import this into your Roll20 adventures and give your players a home away from home amongst the stars!
My Line of Sci-fi RPG Sourcebooks
Traveller RPG Headquarters on Facebook
About Me (Would You Like To Know More?)
Top

Re: The Relic: Now Available on Roll20

I'll be adding more to the blog section as I transfer blogs over from the old site.
I'm also porting over the Traveller tools like the Starship Mortgage Calculator, so make sure to get on the newsletter list if you want to be notified when that goes live.
If you want to get notifications about new videos, new products, news, and more, be sure to sign up for our Newsletter. We won't spam you or share your info.
I hope you find this an improvement over the old site, and as always, I'm open to suggestions on how to serve this community better.
Thanks in advance for your business and support!

Join Us!
>> CyborgPrime Games <<
My Line of Sci-fi RPG Sourcebooks
Traveller RPG Headquarters on Facebook
About Me (Would You Like To Know More?)
Top
Post Reply
3 posts • Page 1 of 1