Halloween is coming up next week! Are you looking for a science fiction/horror adventure for your players?

If so, I have just the adventure for you. Hell's Paradise, one of our more popular adventures, is full of horror, suspense, action, and adventure!

TXE-605b, known to some as Calliope, is an untapped planet whose barren surface but breathable atmosphere and abundance of water promises to be an excellent candidate world for colonization. The Nordic Exploratory Service sent an expedition to the TXE-605 system to expand humanity's knowledge of this world. Now their vessel, NESS Arn, has not returned on schedule. The crew of the CCAS Clara Barton, a Cascadia Colonization Authority search and rescue ship, has now been tasked with finding out why the Arn has not come back from TXE-605b. Have they been attacked by pirates? Have they suffered a malfunction? Or is it something far more sinister?

Hell's Paradise is an exciting adventure filled with danger and intrigue. It comes with nine pre-generated characters, the stats and deckplans for Clara Barton, a Trailblazer-class ship used by the CCA. In addition, it also features maps of TXE-605b and the overall TXE-605 system as well as deckplans for the NESS Arn.

Although Hell's Paradise can be modified for use in any science fiction setting, it is made with our Clement Sector setting in mind. It will be helpful for the Referee to be familiar with the Clement Sector Core Setting Book and Unmerciful Frontier: The CCA Sourcebook to get the best use of this product. 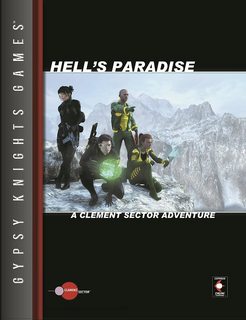