In a campaign with several mobile factions (like "Pirates of Drinax"), keeping track of which faction is where at what time can be difficult. I'm working on a little program to visualize the path of ships/fleets. It's only a rough prototype at the moment with hardly any functionality. 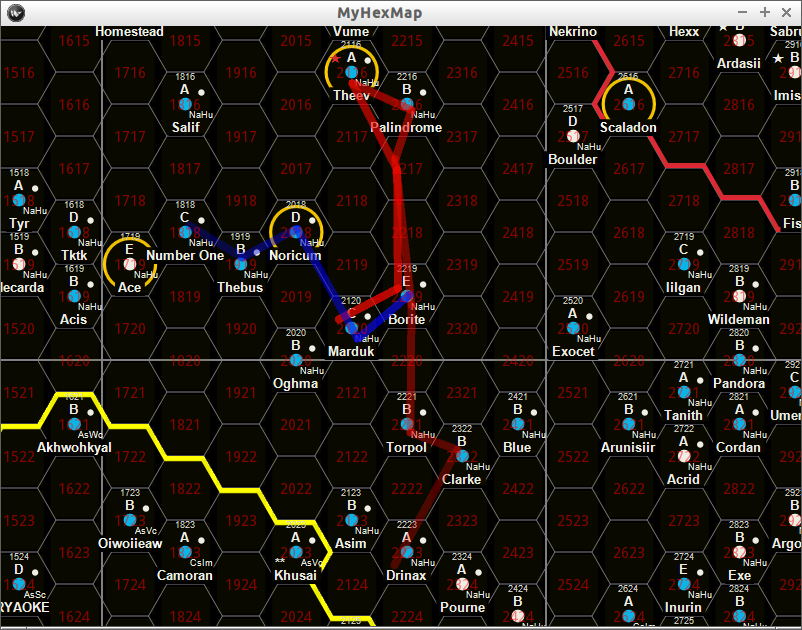 Do you use a travellerMap view as a background, or draw you own map?
Top

It's certainly an issue. My Drinax campaign is a bit over a year old now, my GM table is scattered with printed maps with arcane notations where I currently keep track of: My PC's, two small Imperial patrols, the odd larger pirate group, my PC's second pirate ship (The Mercifuge from Adventure 1), and now an assortment of Corporate vessels from the legitimate front corporation (started with stolen ships, rebirthed) they've set up to do the non-criminal things they need done.

And I still end up just magippearing ships in convenient or inconvenient locations when they ask or go hunting, because I lose track

Don’t tell your players about the secret NPC wormhole network....

I was thinking about a similar tool meant to track information flow.

What kind of tools are you using? Are you going to the TravellerMap database?
Top

If you track time in your campaign, then you can track ship location via excel or even a text file.

Orbit location tracks where the ship is relative to the main sun. So, if the ship is half way between Earth and Mars, it's orbit might be 3.5. If zero degrees is due east, always pointed towards the Galactic center, then a ship whose location is 92 degrees in orbit 3.5 would be in quadrant 3 near to due south of the sun (assuming quadrant 1 starts in upper right corner of map). If a ship enters jump, you track when. Enter the date it exits jump. Enter where it will exit jump space and where it will end up in the new hex star system (ie orbit and relative location in degrees from zero.

Why galactic center always act as "due east" or zero degrees? Remember how a ship keeps its velocity vector upon entering jump space and exiting jump space? By using Galactic Center as the external reference point, you can now have a means of tracking the entry and exit velocity vector.
Top

Orbit location tracks where the ship is relative to the main sun. So, if the ship is half way between Earth and Mars, it's orbit might be 3.5. If zero degrees is due east, always pointed towards the Galactic center, then a ship whose location is 92 degrees in orbit 3.5 would be in quadrant 3 near to due south of the sun (assuming quadrant 1 starts in upper right corner of map).

If you go into that much detail, you have to keep track of velocity and thrust, too, because without it, the location is useless. But this is far more than I want to visualize. My current idea is that I store the information in a simple text file, looking something like this:

Drinaxi Pirate Fleet: So far, only the Harrier # First line: Name of the fleet or ship, and after the colon the comment

#
# Every line is composed in the following way:
# First word: Date of the event happening in the form YYYY-DDD-HHHH
# Space
# Second word: Either a system in the form CCRR (the standard hex coordinate)
# or a jump in the form CCRR>CCRR, source hex>target hex
# Optionally: A colon, followed by a comment that is shown in the program
# Everything after a hashtag is ignored as file comment
# Empty lines are ignored

Basic functionality I want to implement:
- Go back and forth in time to show ship paths up to a certain date.
- Click on a hex to show the coming and going in that hex.
- Click on a fleet to show the information in the file
- Show a "!" on a hex where two fleets are at the same time.

If all that works, a way to ADD information would be nice, too. But one step at a time.

At the moment, the program draws the paths on a locally stored image. I use the Kivy framework to do all the complicated stuff.
Top

When I was running Drinax last, I started to use a spreadsheet: columns for ships, NPCs, and/or groups and lines for weeks. I just rounded up time spent fueling, shopping, repairs, etc., in terms of weeks. We suspended the campaign before could really develop it, but that's my thinking of how to manage it.
Top

Picture of you will:

Length of vector is built up velocity. Direction of vector is based upon past movement using prior turns of movement using vector movement rules of book 2 starships. This is recorded as relative to center of mass of ship. Convert polar coordinates to rectangular with ship as zero, zero location. Convert current location (also in polar coordinates with star system center of star as 0, 0. Add ship velocity vector to ship location vector. This gives new final location relative to star, if the ship does not accelerate in any direction. If ship accelerates, use real world formula for distance travelled while under acceleration. Take old position, draw vector to new position. This becomes new ship vector relative to itself.

This was the basis for the code I was working on. I got the prototype coding for translation polar to rectangular and back. If orbits were perfect circles (which sadly, they are not) - it would be simple to plot where a planet would be at any given moment. With the ability to know where a ship is at any moment - sensor ranges could be calculated. Naval engagements could be done where the GO could let the players are only what their sensors can see.

Such a ship plotting app that tracks ships, would be system agnostic, usable with CT, MT, TNE, T4,GT, MgT, and T5 (don't know how T20 works).

Toss in record keeping for jumps, etc - and you have not only a nice helpful app as a GM, but finally, a way to handle the question of pirates of no pirates in a vector movement system that does all the record keeping for you. Want to race at max excel to reach a pirate attack? Go for it. But if your velocity vector takes you out of engagement range, that is a huge gamble.

As a GM, I would have loved to run a triple blind scenario. Pirates vs civilian. Pirates hoping to avoid the Navy, and the Navy trying to sort out the pirates from the civilian.

Imagine being the naval player who captains a 5,000 D-ton destroyer in orbit, with a portion of his crew planetside (R&R, ship business, etc). When the balloon goes up, he has between 20 minutes to 60 minutes to recover crew and respond to a report of a pirate attack. In the mean time, a ship leaves the world on its blind side (low pop world) on an intercept before a 1g freighter can reach 100 diameters. A warning shot across the bows invited the prey to stop accelerating and allowing the pirate to match final vectors and allow the pirates to board and maybe hand unload cargo/freight before the destroyer can come into range. Maybe the pirates stay too long. Maybe the pirates dangle bait for Destroyer to chase prior to real attack and the destroyer is out of position. Maybe the destroyer has fighters on board that the captain leaves on the planet surface...

In short - a sandbox for testing scenarios, tactics, and even submarine sensor drama (just what IS outside of sensor range?!!!).

But, I lost interest. No one to write the app for. Even had the subsector planned to run it in - Lunion. Close proximity to a border (sword worlds), table of organization based on what would eventually become SECTOR FLEET. Naval command would have had to deal with crew replacements as personnel hit their separation from service date. Mandatory maintenance scheduled and the like. Even toyed with a red/blue team set up for crews to allow R&R yet keep the ships operational as long as possible.

Never got to happen alas.
Top

At the moment, the program draws the paths on a locally stored image. I use the Kivy framework to do all the complicated stuff.

Interesting. I don't use Python, but it looks like a handy tool set.
Top
Post Reply
10 posts • Page 1 of 1

Users browsing this forum: No registered users and 19 guests