Honour Among Thieves mentions examining a monolith and discovering someone could be revived.

I was curious how other referees handled the discovery. Sensor scan? A panel on the outside of the monolith with the relevant information?

Not sure if my players will think to do a scan so I have been pondering other ideas.

Shawn
After years of being trapped on a Fantasy planet, I'm finally off world and wandering the stars once again
Top

Old School wrote: ↑
Wed Dec 09, 2020 10:51 pm
IMO the whole structural vs cosmetic, etc RU was abstract rules gone to far. This process adds no enjoyment to the campaign. If the players wanted something for the ship, they had to figure out how to get it. And so the next adventure begins.

Feels like the whole RU thing is MgT 2e trying to incorporate some more advanced ideas from T5, maybe as a lead in to the Deepnight Revelation campaign (which incorporates some complicated meta-game abstractions) or the upcoming FFW material. Unfortunately T5 is filled with broken, conflicting and confusing rules.

Probably I'm wrong, which happens all the time

In the mean time I will keep wishing for Mongoose to have more freedom from canon and from the 'ultimate' ruleset. IMO Mongoose has saved the Traveller game from oblivion.
Top

@Targan thats the one thank you!

I agree with the RU thing. i ended up using the original Harrier rules were you exchanged ships shares to fix things or paid in game cash for it.

I had as part of the meeting with Keeper Malos mention that as with all who are killed or about to die on Clarke the People attacked in the Raid were placed in the Stasis Monoliths to await the great joyous day when Clarke's Technology becomes advanced enough to bring them back.

I also had Malos inquire with them if Drinax would be willing to trade some of its medical knowledge in return for goods seeing as the Scholars of the Tower are renowned for bringing Prince Harrik back.
That gave my group some ideas that with the Harriers High tech they probably had access to some form of tl 15 med gear on the ship which they used to revive someone wounded in the attack.

ruhalla wrote: ↑
Thu Dec 10, 2020 8:05 am
I agree with the RU thing. i ended up using the original Harrier rules were you exchanged ships shares to fix things or paid in game cash for it.

Same here. We used up the player's Ship Shares and fixed her up pretty well. As the first adventure started, the Harrier was in very fine condition and through out the first adventure, which took around 6 months game time (and offtime as well), the Harrier was not damaged at all. Tomorrow, the players will have to choose what's up next. And quite likely, it will be more dangerous than Ferrick Redthane and his ruffians.
liber et infractus
Top

As my players have already spend their initial shares, I'll keep the whole RU thing going on, but I will drop the x5 CRU for TRU and SRU.

Thanks for your help!
Top

Old School wrote: ↑
Wed Dec 09, 2020 10:51 pm
Feels like the whole RU thing is MgT 2e trying to incorporate some more advanced ideas from T5, maybe as a lead in to the Deepnight Revelation campaign (which incorporates some complicated meta-game abstractions) or the upcoming FFW material. Unfortunately T5 is filled with broken, conflicting and confusing rules.

Probably I'm wrong, which happens all the time

In the mean time I will keep wishing for Mongoose to have more freedom from canon and from the 'ultimate' ruleset. IMO Mongoose has saved the Traveller game from oblivion.

I don’t think so. At least I hope not, as T5 is still a hot mess 7 years later. These meta-game abstractions are also a big part of the Naval Campaigns system, and I would expect them in the upcoming Mercenary supplement as well.

What do Deepnight Revelation, Naval Campaigns, and the Harrier Supplement all have in common? All written by MJD. I think he likes this approach to the big campaign setting, where the ship and crew is as much a part of the campaign as the PCs. Takes the pieces that work for you game, and toss the rest (like any other rule system).

If it gets in the way of smooth gameplay, sideline it.

Assuming it reflects somewhat accurately the costs and efforts involved in repairing, refitting and/or renovating spacecraft, it would appear to allow players more options in customizing theirs.
Top

The Crew named their Harrier the Dark Star

I ran my group through Reach Adventure 1 Marooned on Marduk and Gods of Marduk. Which i mixed and mashed with the reason the group was there being to locate a hidden cache of parts for the Harrier needed to repair it. The Sea Exploration was a great deal of fun and allowed the team to get into the traveller 2e system well.

After that i ran First prize from the Drinax Companion and Honor Among Thieves from the Pirates of Drinax. The Pirate city of Theev proved a dangerous and exciting place to visit.

Since then my group has largely been free roaming engaging in a couple of acts of Piracy. Became Involved with rescuing a kidnapped Missile Scientist on Ergo as well as becoming involved in smuggling arms to one of the Ergo Warlord factions

Becoming Embroiled in a Plot at the Court of Drinax as they attempt to sway the powers at court to their side and Engaged in a Grav Belt Race among city ruins.. Made even more dangerous by Vexpexer barbarians taking potshots at them.

Becoming involved with one of the states on Paal which is trying to smuggle in high tech gear necessary to start up their own starport thereby bypassing the Monopoly of the Railroad Consortium.

Most Recently they have begun Search of Sindal the first part of the Shadows of Sindal campaign which i am blending in with the wider Drinaxian campaign.

I would love to hear the ideas people have come up with in their own games as well as rumors you have used in your games.
Top

Sounds like it's going great, Ruhalla. You're really leaving no stone unturned. Fitting both Marduk adventures in, rolling into "Honour Among Thieves" and then moving into the "Shadows of Sindal" trilogy is a great start. You're giving your players the full experience. I love the user of the Vespexers. Reminds me of the Tusken raiders in the pod-racing scene of Star Wars: Episode I.
My published Traveller adventures on DriveThruRPG:
https://www.drivethrurpg.com/browse.php ... %20Griffen
Top

paltrysum wrote: ↑
Wed Dec 23, 2020 3:20 am
I love the user of the Vespexers. Reminds me of the Tusken raiders in the pod-racing scene of Star Wars: Episode I.

Thats exactly were i stole it from

I am quite enjoying the Travel on Paal. I have been describing the small cities and towns of each state they have traveled through in very Swiss kind of ways
valleys in wast mountain ranges with massive farm fields connected to the Downport via a monorail system.

Its become something of a gourmet trip tasting the local delicacies and drinking the local wine. While also maintaining their cover that they are there to strike
trade deals to export Paalian luxury foodstuffs to Drinax.
Top

Just an aside, this just popped up on RPG.net, which I think might have the makings of a good thread - I am sure people there would love to hear your experiences with the Pirates of Drinax:

i then added a third cost to it
Hiring a professional crew to do the job and create a fake transponder along with a fake ships history
250.000 Cr per 10 Ton

All added up if my pirates want to steal a ship and use it for legitimate business they are paying 750.000 Cr
per 10 tons of ship.
This would mean a 200 ton Free Trader would cost them 15 million to make "legitimate"

If their plan is to just use the ship for piracy and never go near legitimate ports doing the first bit is enough
Doing the second operation allows them to fly the ship through systems and as long as they dont attract any attention
to themselves the ship will stand up to a cursory scan.
Top

Here is a map I did for my campaign to give me a 'scope' of the Sindalian Empire. I have tried to stay true to the POD adventures when specifics where given. The rest I made up. Maybe you might find it useful. 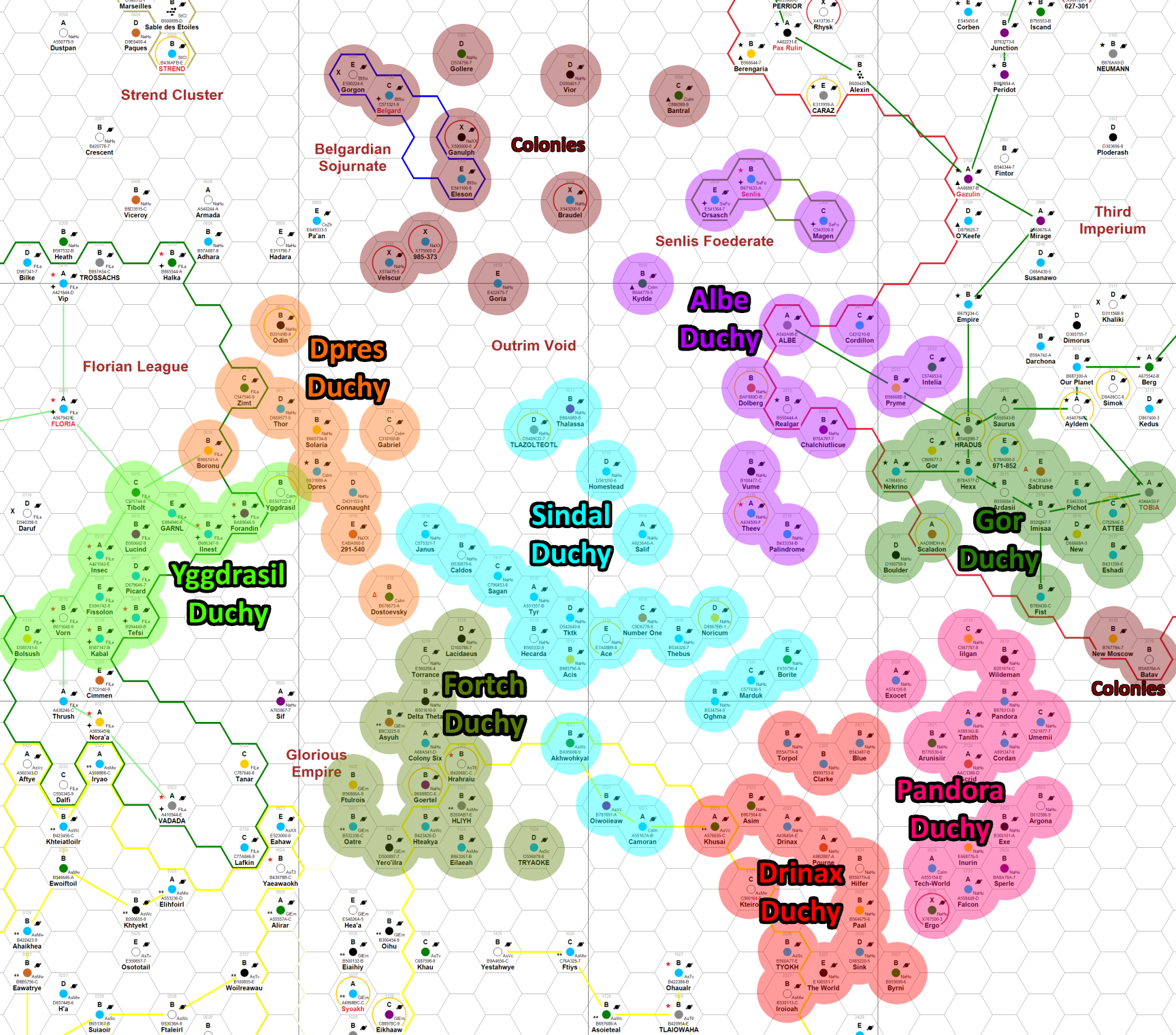 Gor should be an interesting place to visit.
Top

Map looks great will use it in my game!

Having just run Last Train Out of Rakken Goll, I can confirm that it is.

Do we actually have a canon list of former Sindalian worlds? I see this map and it's similar in scope and extent to another one floating around in the internet, but I don't know if these are completely homebrewed works or not.
liber et infractus
Top

To my knowledge, we do not have a canonical list of former Sindalian worlds. A good scouring of the world descriptions in PoD Book 2 will help you figure out many of them, but the borders of the former empire are not certain. The post by peelseel is a nice homebrew estimation of the Sindalian Empire's reach, though. He's obviously done some research of the available material.
My published Traveller adventures on DriveThruRPG:
https://www.drivethrurpg.com/browse.php ... %20Griffen
Top

Absolutely, this is very useful work. And it covers closely other sources available. So we probably could produce a list here that's fairly complete. It's a bit difficult, because of PoD 1st and 2nd edition differences, but it should be doable.
liber et infractus
Top

If you're a player in our FGU campaign abort or I will resort to hitting you over the head with the core book...

Here is my mostly complete campaign map for all the adventures in PoD, PoD Companion & Third Party PoD suitable adventures.
I built this so I could visualize the various trips and planets involved in all of the (30+?) PoD adventures.
If you notice any omissions please let me know!

Note 1: A circle denotes start point while a triangle denotes end point.
Note 2: Multi-part adventures are color matched for easy reference (example- Shadows of Sindal campaign)
Note 3: Only required system stops are shown (this is why some trips do not intersect with systems, instead skipping over them).
Note 4: The "Rumors of Sindal" adventure seeds (example- Tomb of the Unknown Spacer) can be placed anywhere in the ancient Sindalian Empire, my location choices are shown in red but yours may vary.
Note 5: The map was exported from Travellermap and the adventures added in Illustrator. It is in perspective as it compresses the top of the map where little activity occurs. If it was flat (as many have asked for) the map would be so tiny you wouldn't be able to make out the sytems.
Note 6: Link to high-res map: https://www.dropbox.com/s/ru5qpk97uzv7v ... p.png?dl=0 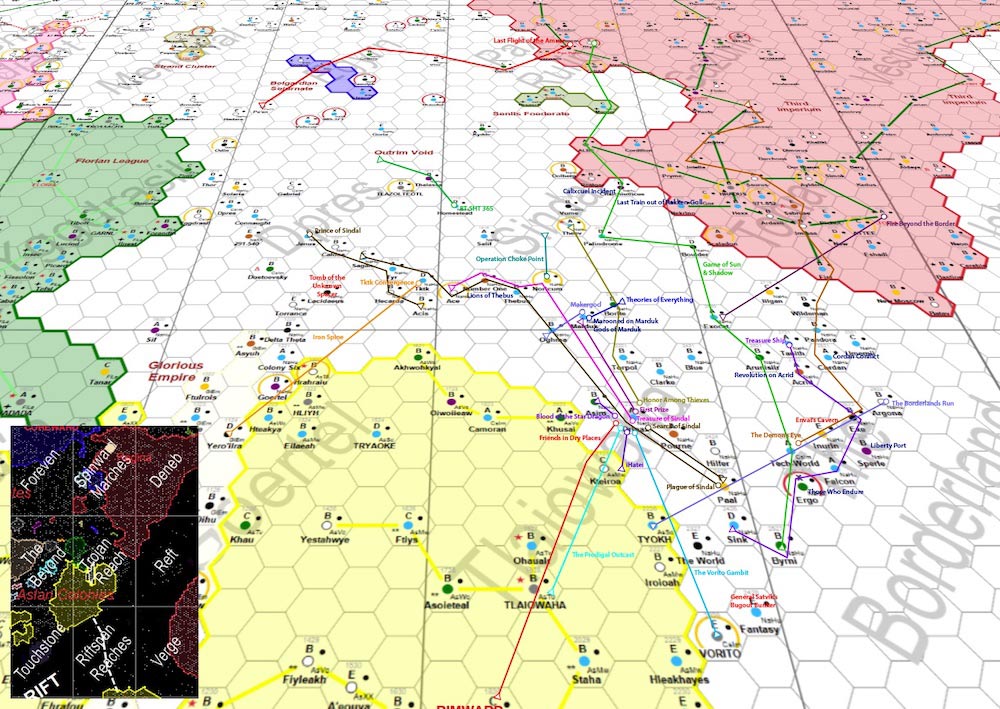