Pirates of Drinax - How many ships fly the trade routes

Re: Pirates of Drinax - How many ships fly the trade routes

steve98052 wrote: ↑
Tue Sep 26, 2017 6:06 pm
The best way to figure out trade volume is probably the system in GURPS Traveller Far Trader. Some of the on-line maps include a "world trade number" figure (WTN), and from that you can get a "bilateral trade number" (BTN), which is the sum of the WTNs minus a distance modifier. With that, you get the trade between worlds.

That only covers traffic between individual pairs of worlds. A choke point world may be part of the route between several high BTN pairs, and have a lot of through traffic. It may even have a hub traffic, where cargo or passengers change ships in the system but don't end their travel there. (Hub example below.)

For low BTN, the only traffic is the occasional free trader or subsidized merchant. For moderate BTN, there's regular free or subsidized trader traffic. For high BTN, most cargo goes by big freighter, most passengers go by big liners, and the scraps go to free traders. Because the big ships grab most of the cargo and passengers on the busy routes, the amount left for the little guys isn't any better than the amount available on a moderate BTN route.

If you're looking for how much traffic is available as prey for commerce raiders, I'd say that the routes that are busy enough for big freighters and liners are also going to be well served by system defense boats and heavy monitors. In other words, those routes aren't a good spot for small time raiders. The best spots for raiders would be the lower end of moderate BTN routes, where there are enough ships that you can find a victim without such a long wait that the crew starts to get itchy about not getting paid, but low enough that the system isn't guarded by monitors that can turn your puny raider into salvage the moment you threaten a merchant ship.

I haven't mentioned numbers, and I can look them up if no one has the books handy.

Hub example:
The five worlds A, B, c, D, and E map out like this (with dots to force the formatting to work, since I can't get a monospaced font):

A, B, D, and E have high WTN, but c has a low WTN.
For travel between A and B, or D and E, traffic goes through the obvious Jump-1 routes. But travel between A and D or E, or between B and D or E, all has to go through Jump-3 routes by way of C (unless it's so insanely urgent that it justifies a TL15 Jump-6 express). There might be dedicated lines for all of A-D, A-E, B-D, and B-E, but it might make more sense to have A-c, B-c, D-c, and E-c lines, and do exchanges at c. That's particularly convenient if the cargo and passengers are carried on modules (or containers, for smaller lines). There might even be some tourist business on c, for passengers who have a few days of layover.

In order to illustrate the comprehensive "gravity model" economic system in the GURPS Traveller: Far Trader sourcebook (do yourself a favour and get a pdf copy), let's do a working example calculating trade volume between Tobia (3215 TR) and Tyokh (2226 TR). Please refer to the attached image taken from travellermap.com showing one of the possible routes (in this case eight 2-parsec jumps to cover the journey without need to resort to "wilderness (i.e. gas giant) refuelling"): 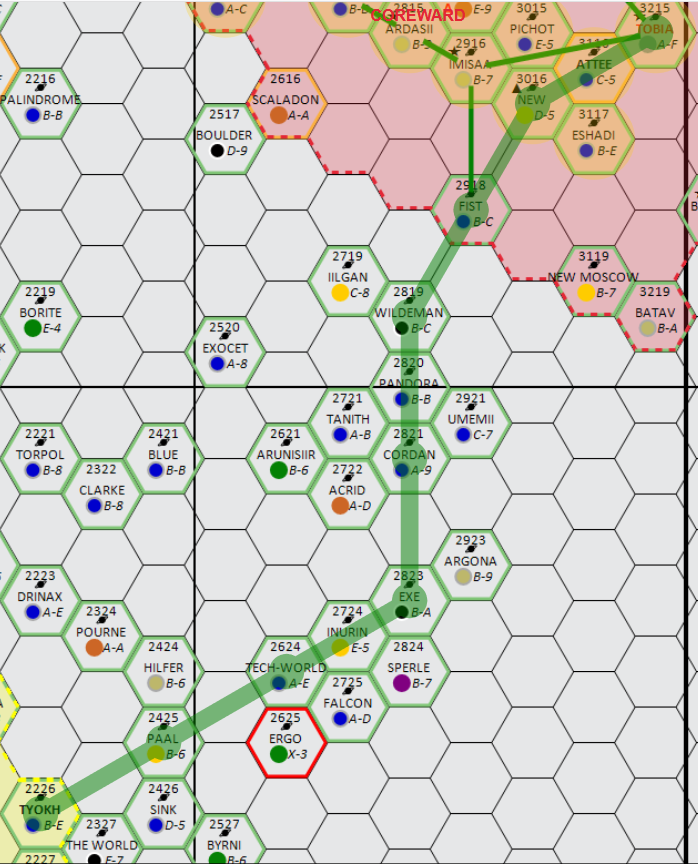 The distance between both worlds is 16 parsecs. Note that only total route length (and not number of jumps or jump lengths) is significant in the below calculations.

First of all, let's get an idea of the relative economic importance of these two terminal worlds and then let's calculate both terminal points' World Trade Number or WTN (a number sadly absent from many world entries at the Traveller Wiki):

* Tobia (UWP A544A55–F) is an industrial (In) sector capital (Cs) high-population world (Hi) with the finest starport class (A) and the most advanced Imperial technology level commonly available (F). It also has an Imperial naval base (N).
* Tyokh (UWP B566AH7-E) is a high-population (Hi) Aslan (As) world with a fairly good starport (B) and a rather high tech level (E).
In order to find the Bilateral Trade Number (BTN) for Tobia and Tyokh we must first check any modifiers that apply (World Trade Classification Modifier or WTCM). The only one which counts is the the following one:

A BTN of 9.5 implies the following trade volumes between Tobia and Tyokh:

Users browsing this forum: No registered users and 6 guests