I spent a few hours, playing with different apps I have, doing various draft models of the Free Trader. It will be a lo-res model when completed. Something that I don't want to spend more than a couple days on. Which meant Hexagon would be used. Ha!

Amapi Pro is great at NURBS. But it is a terrible box-modeler, which I was finding worked better for this kind of object. I had forgotten that Hexagon does boolean cutting, which speeds up the modeling process as well. I'm hoping I don't have to do too much clean-up work on the mesh, once I'm done cutting chunks out of it.

Because I'm old-school, when it comes to modeling Traveller ships, I tend to use only the first drawing made of a ship for reference. I have no idea what the back or bottom of the Free Trader looks like, because there is only the one image of it in The Traveller Book hardcover on page 64. Maybe I have some notes that I took about that back in the day still. Otherwise, creative license as usual.

Like all models I make, this one will also be done by eyeballing things. No tracing. 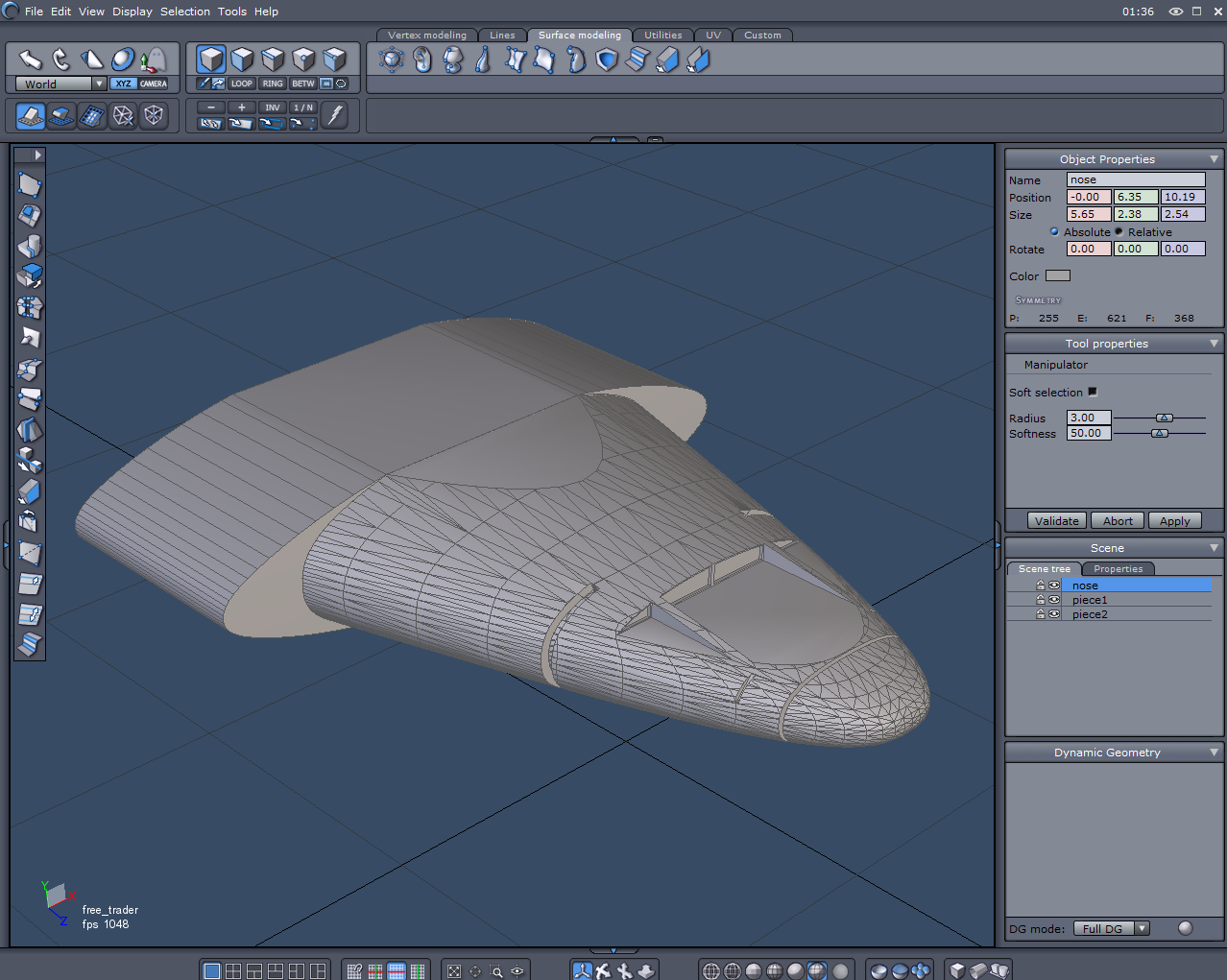 Looking good so far! Are we going to be able to make miniatures out of your work?

Nope. Just rendered shots for my players to look over, to get an idea of how my Traveller will look to them. 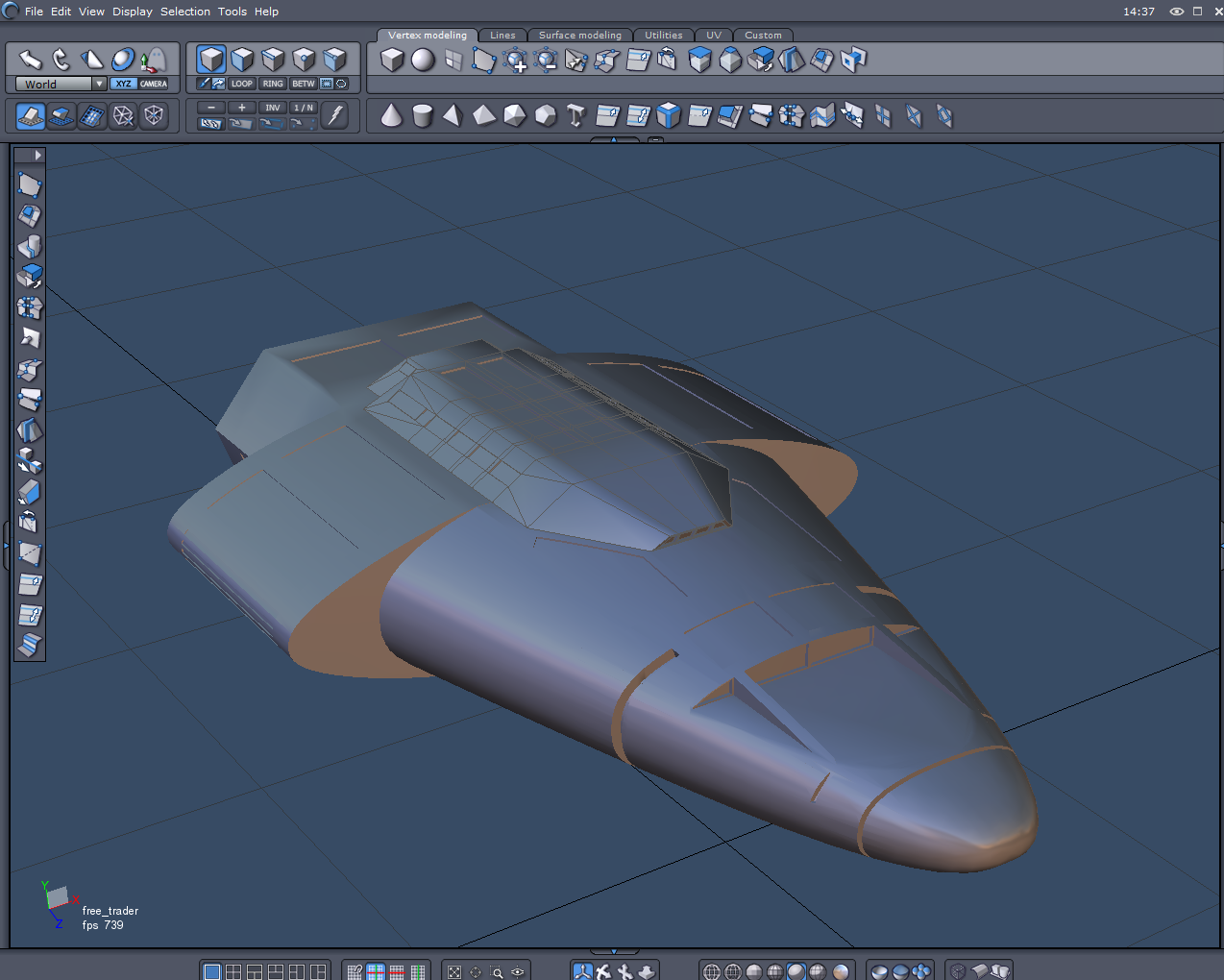 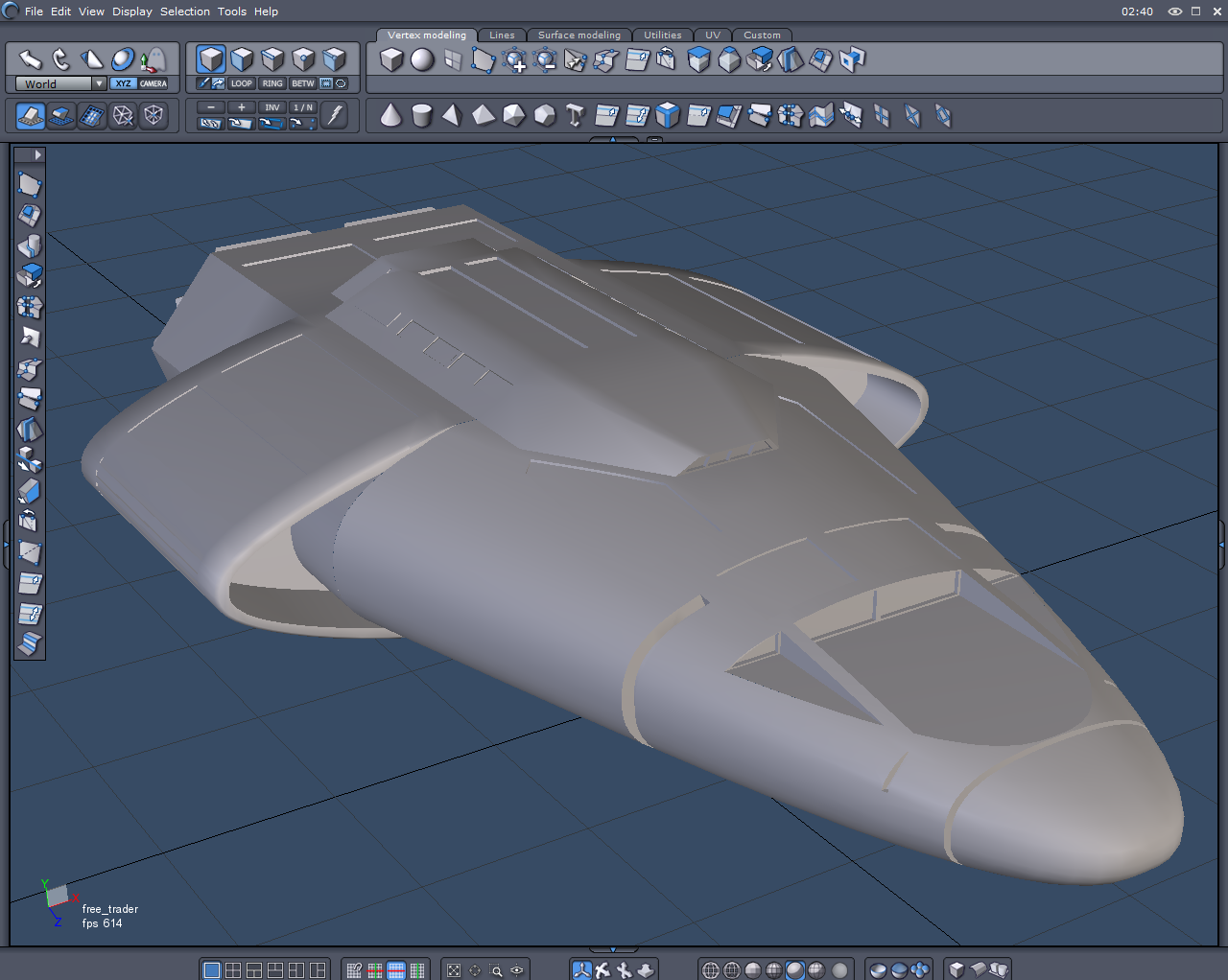 Hey Shawn, does your program you are using, estimate the projected volume of the models interior? Not so much a bounding box.
Top

fireyphoenix22 wrote: ↑
Wed Jun 21, 2017 6:16 pm
Hey Shawn, does your program you are using, estimate the projected volume of the models interior? Not so much a bounding box.

It just marks the 3-axis lengths. No calculations beyond that.
diceroll 3.0
Top

Hey Shawn, thanks answering my question, i love what your doing, i cant wait till its done.
Top

The mesh is done. I just need to paint it now.

Ignore the camo paint. I'm just trying out different scratch/burn/pit marks I might use. 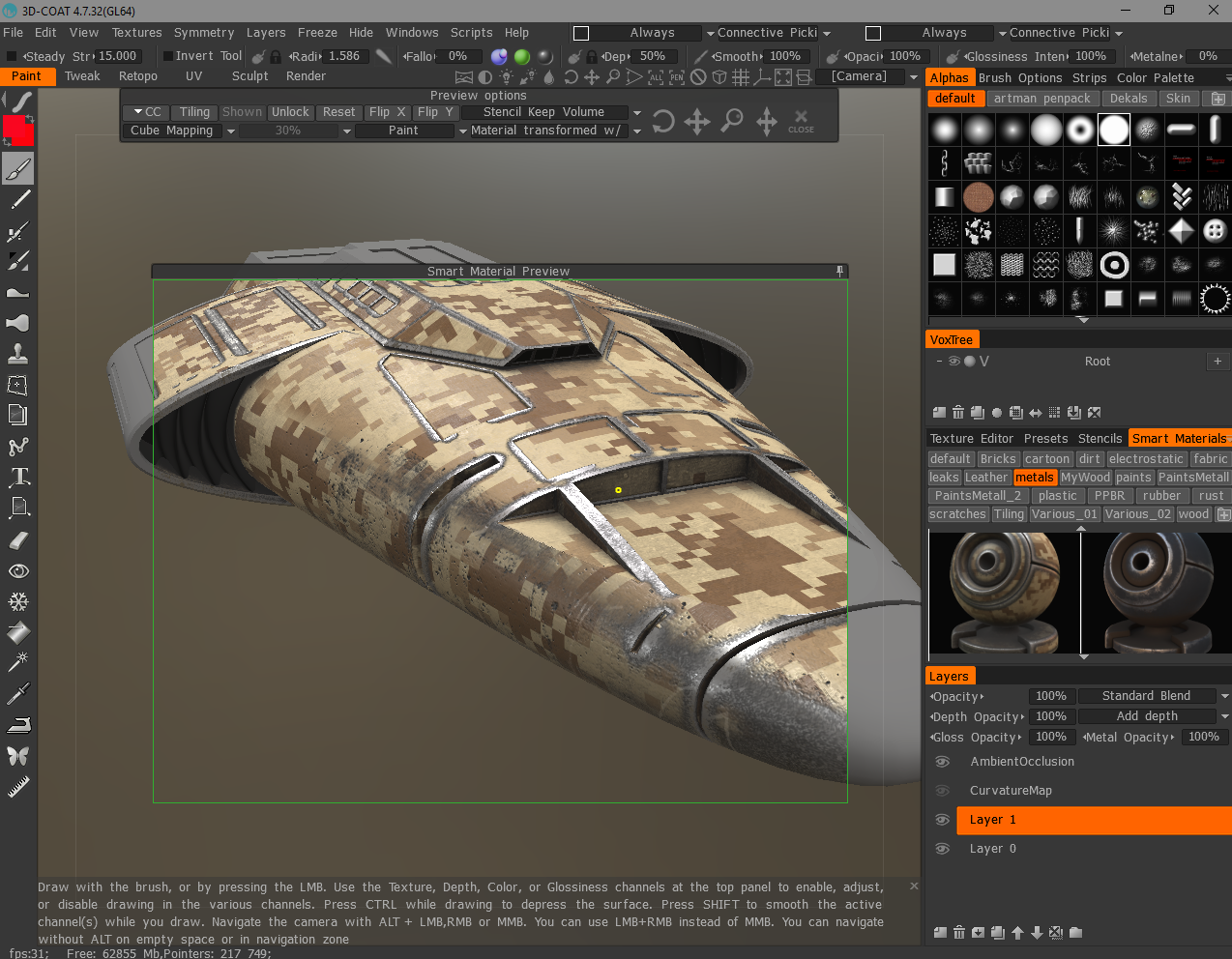 What a piece of junk! 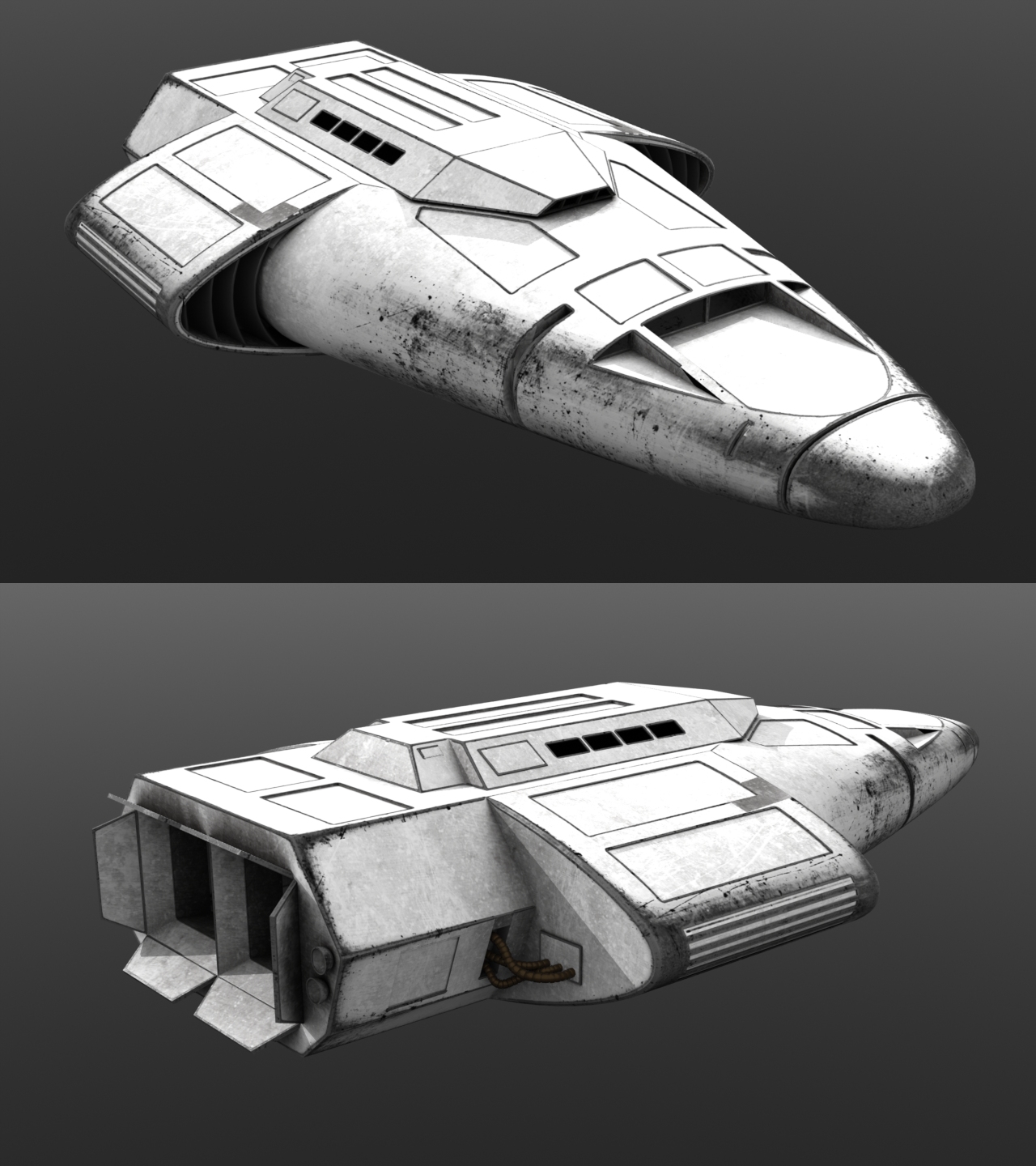 Maybe the players will find this long-abandoned ship, and work on restoring it. Maybe even discover a story that once belonged to it. Probably worth more as scrap though.
diceroll 3.0
Top

But can it make the Kessel Run in 12 parsecs?
Top

In twelve parts per sector.
Top

Video of some painting being done so far. https://www.youtube.com/watch?v=YB5-_ruvSPY
diceroll 3.0
Top

I'd call the projections on the sides fuel scoops, not ramjets.
Top

I don't know yet if this ship will have fuel processing or not. I know it won't have any vehicles hidden in it, like most players like to do with their Type-As. 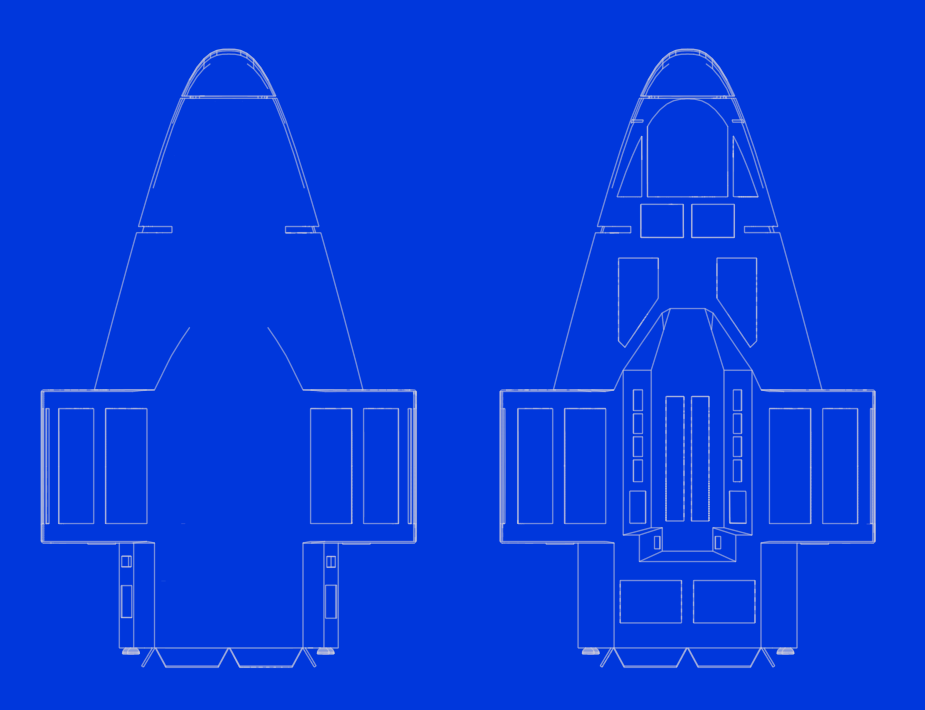 Coming along nicely. I love the distressed effects. Any chance you'll do a Voidskipper paint job? I'm planning to continue using the free trader from "Last Flight of the Amuar," in an adventure I call "Iron Spine" that I intend to publish here. A credited image and all the fame and fortune that goes along with it will be yours.

I wish I had this skill
Top

What is a Voidskipper paint job? 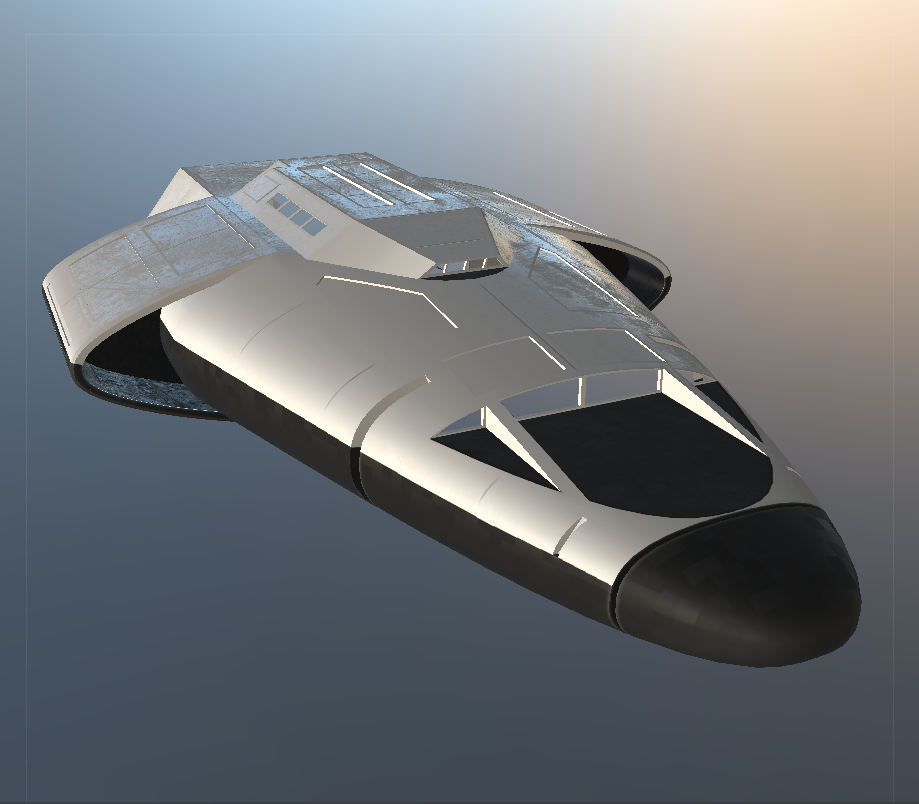 What is a Voidskipper paint job?

Hopefully I'm not breaking Mongoose rules by posting this screenshot:

There's already a ship painted that way. And it has that name, even. It wouldn't make sense for two ships to both have the same custom paint job in the TU.
diceroll 3.0
Top

fireyphoenix22 wrote: ↑
Wed Jun 21, 2017 6:16 pm
Hey Shawn, does your program you are using, estimate the projected volume of the models interior? Not so much a bounding box.

It just marks the 3-axis lengths. No calculations beyond that.

could you give us those dimensions in meters, please.
Top
Post Reply
31 posts