steve98052 wrote: ↑
Mon Jan 08, 2018 6:26 pm
That suggests an interesting twist in a mercenary campaign, by the way. Your passenger liner gets you to the conflict world, and your team enjoys the first day of pre-combat rest in startown. But after two more days, the cargo ship with your grav APCs and mass driver artillery is overdue. Your client understands, and can reschedule the operation if necessary, with loss of initiative -- or can offer substitute gear: lots of ordinary trucks, some recoilless rifles and mortars, and a zeppelin for air surveillance. Do you go ahead with the operation?

Great ideas! Mind of I steal 'em for my next merc campaign?

The other concept I came up with was a merc campaign that started out with the players as mid-level officers/NCOs in a reputable merc unit. Behind the scenes, the owner and commander of the company has developed a gambling problem or is perhaps indebted to organized crime and is therefore skimping on payments to all but his inner circle of soldiers. The players are getting screwed. How long does it take for them to realize it? Could provide the impetus for them to go out and start their own company.

True, but they could do that at the site of the ticket or before they leave, thereby reducing their transit costs. It's a luxury to be "awake" during jump; however, preparation is key and if they're expected to get straight to work using whatever intelligence is brought to them, then yes, they might very well need the prep time during jump to get ready for the operation.

All this talk of merc campaigns is giving me the itch to start one!
My published Traveller adventures on DriveThruRPG:
https://www.drivethrurpg.com/browse.php ... %20Griffen
Top

As I recall, eight hundred tonnes and factor three engineering represented some form of sweet spot for performance over volume.

The spherical shape and the cutters probably were a tribute to Piper's Nemesis.
Top

AndrewW wrote: ↑ With staterooms (or barracks) the soldiers can train in transit.

True, but they could do that at the site of the ticket or before they leave, thereby reducing their transit costs. It's a luxury to be "awake" during jump; ...

The (in CT) 10% death rate each time the soldiers are defrosted might hurt morale?
Top

You wouldn't want to waste the air on cannon fodder, so cost benefit would be to hire the best available.

Intensive care variant for really traumatic injuries, that someone more qualified could treat later on.
Top

Just saw the Kickstarter for the reboot of Triplanetary. Sure looks like a Broadsword on the cover!
Top

I would argue that mercenaries -- at least in the sort of mercenary campaign players are going to want to play -- are not cannon fodder. They're the elites who train local cannon fodder on one side, and lead them into battle against the cannon fodder on the other side.

Of course, some of your forces are likely to be people who are mercenaries not so much because they're gung-ho elites as because they don't have any better career options: if they go back to their homeworlds without a lot of money from a big mercenary ticket, the only job they'll be able to get is a digger in the local arsenic mine, and maybe foreman if they live long enough as a digger.

But they're not the kind of people players want in their team. They want the adrenaline junkie who wants to blow stuff up, and maybe even get down and dirty with archaic weapons on a world where guns are interdicted, or just likely to draw too much attention to a covert mission on a low technology world.

Thanks! I'd be flattered.
Top 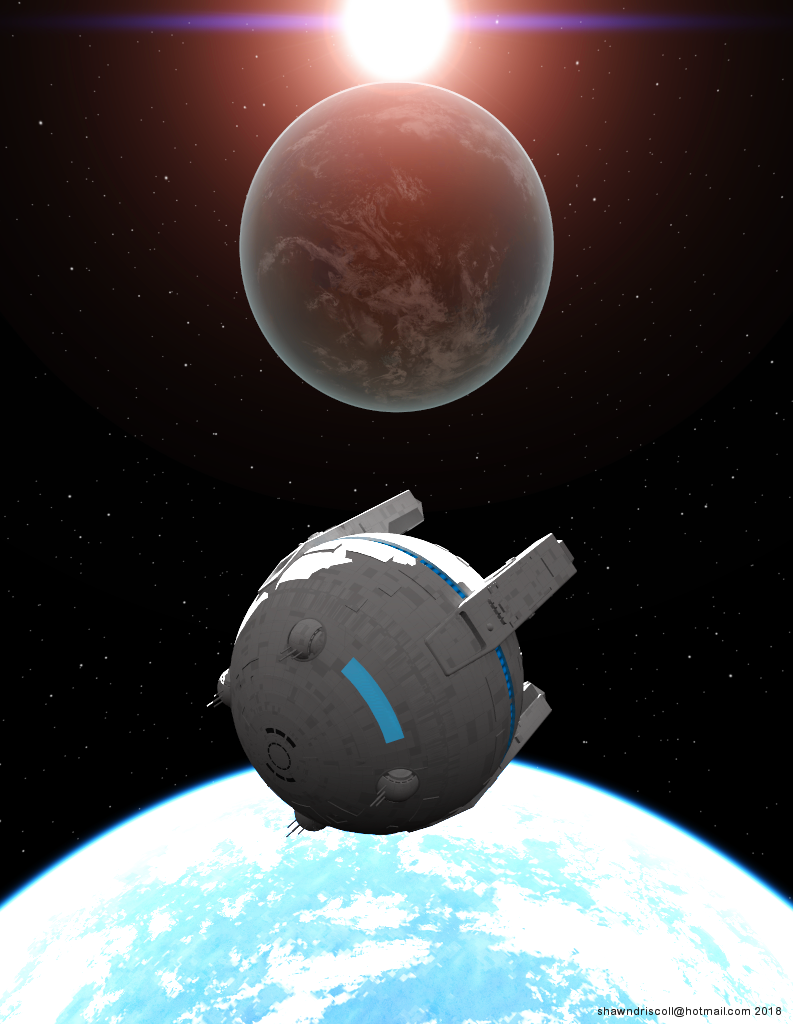 This picture is very pretty but I don't understand the shadows.
Top

I think those are intended to be arcology towers. Nice work on the art, Shawn!

EDIT, responding to Moppy's comment below: Oh, sorry about that, Moppy. The arcology towers befuddled me for a moment and I initially thought they were shadows so I assumed you did the same. Now that I know what you mean, yes, it does sort of look like a Tigress-class dreadnought is casting a shadow on the Broadsword, doesn't it?
Last edited by paltrysum on Tue Apr 30, 2019 5:46 pm, edited 1 time in total.
My published Traveller adventures on DriveThruRPG:
https://www.drivethrurpg.com/browse.php ... %20Griffen
Top

I didn't think those were shadows. I meant the size of the Broadsword's. It's probably fine and me not being a spacer.
Top

The black thing in the lower-left corner is just another Broadsword. Vignetted candy renders will do that near the edges of a frame. This is a revisit of an old scene I used years ago. My Pinterest has variations of these ships "in orbit" together.
diceroll 3.1
Top

Users browsing this forum: No registered users and 43 guests