Below is a list of models we have on our 'wish list for the Judge Dredd miniatures game - we would like your opinions on them, first as suitable 'stretch goals' for our ongoing Kickstarter, but also as a little 'ideas factory' for when the Kickstarter is complete.

Let us know which of these models you would like to see first and, if you have a great idea for a model that is not on the list, let us know!

FAMOUS PERSONALITIES
DeMarco & Perkins
Grampus
Kenny Who?
Chopper/Midnight Surfer
Call Me Kenneth
Satanus (probably not a goer, as you can just go down your local toy shop and grab a rubber dinosaur)
'Dead Man' Dredd
Chief Judge (one or all)
Judges Glass and Quincey (in Cal's 'uniforms')
Don Uggie Apelino with Joe Bananas and Fast Eek
The Executioner (to be used as alternative Lone Vigilante)
Psi-Judge Anderson
Stan Lee
Max Normal

My vote would be for all of the above

Really like the idea of judges with different weaponry too
Top

Butcher's Boy wrote:My vote would be for all of the above

Really like the idea of judges with different weaponry too

Its hard to pick anything form that list, I genuinely want almost all of them.


Mechanismo bots are the top of my list, with any other variant MC1 judge right after that.

While I would like a figure of each of the Chief Judges, Chief Judge Hershey is the top of that list for me.

Lenny Zero really deserves to be made into a figure. Max Normal featured in the "Zero's 7" story that finished a couple of weeks ago, so Lenny and Max could team up in game

A Judges of the World set would include a generic Emerald Isle Judge or Judge Joyce, so sign me up for that.

A Sov Judge and a Hondo Judge sets would be really cool.

Mo-pads and generic vehicles appeal a lot once the Manta and various Justice wagons are done. Its hard to make a table look like MC1 without sci-fi roadsters and hover cars.

But having thought about it, narrowed it down to these:

Mechanismo - Would be a good mercernary unit.
Gila Munja - Potentially another faction.

Mo-Pad - Plenty of other sources for vehicles, but a mo-pad is quite distinctive.
Top

Hold on people, where the heck is the greatest biker who owns a planet!
Spikes Harvey rotten!?!?
Top

LimeyDragon wrote:Will the "judges of the world" include a Cal Hab Judge.?

Actually, we'll have a Cal Hab Judge with the Brit-Cit Judges, when we expand them to a full box set.
Matthew Sprange

Right, got the E-Mail sent out, but the link in it doesn't work, so I assume this is the thread regards Project Update #4: Judge Dredd Miniatures Game: Block War by Matthew Sprange.

I don't play the game, yet,... but collect the miniatures. that's just so you know where I'm coming from. I'm all for

Heavy Weapons Judges
Psi, Med and Tek Judges on Lawmaster
Another SJS Judge or two?
Exorcist Judge
Uglies Now you ask how to make them different from the mutants. I think you dropped the ball here a bit. The mutants could have been really noticable. Three legs, Lizard tail, Chicken legs etc, where the Uglies would be more well dressed, and just plain ugly. Where as, only a brief look mind you, the mutants look, just plain ugly.

Gila Munja YES! But a full boxed set might be a bit samie (personally I don't have a problem with this, but from a marketing perspective). Perhaps a set of three in a blister, and a set of Cursed earth assassins. There's been a few.

Eldster/Crocks Good civilians to get in the way, how about some deard perps/cits Perhaps a dead fattie with citizen stuck under him?

Assasin Robot As above, in a boxed set.

Satanus (probably not a goer, as you can just go down your local toy shop and grab a rubber dinosaur) You are not wrong there, a waste of effort and likely a non seller.

Vehicles a good, but will they sell? Scenery is always useful, so a couple of ground cars might be cheap to produce and sell well, then see where it goes.

Anyway, personally, I like the above and would also like to see the Sniper Judge with bike. I'm sure he had a bike in the strip, unless my memory is playing tricks. Is there room for long range in the game? Sky surfers with weapons to close, heavy weapons teams to even it up? Anyway those are my thought.

I'll just give my opinions and desires.

Anderson is crucial. You're going to be producing the Dark Judges, and she should have the best chance of dealing with them, especially in their spirit forms. Plus I think she's in the movie, dunno, hasn't been released yet here in the states, but it'd be a good tie-in.

You may want to produce models of some of the movie perps if you can get permission, this'd also help round out some of the regular gangs with special characters and mercs.

Rico. Cybered out or otherwise. Maybe Judge Tex. Hondo Judges, Inspector Shimura (since people requested Stan Lee), as well as the East-Meg Judges (though I think you have those slated).

Everything you have listed is great.

Since you're putting guys on Lawmasters and bikes, Spikes Harvey Rotten! He could be a merc for gangs and judges alike. Zoot Smiley for biker gangs.

Fun perps include Whitey, Kevin O'Neill (a good merc for robot forces, and a tip of the hat to the comic artist Kevin O'Neill), and Benji Doonan.

But to summarize, a nice looking Anderson model should be the next stretch. Everything else should be second.
Last edited by Judge Ford on Sun Sep 16, 2012 6:36 pm, edited 2 times in total.
Top

Glad to see the Kickstarter is going so well. Personally, I'm going to buck the trend by saying that I think there's enough Judges released so far, In the game itself, a Judge Force is only made up of a few miniatures, so dozens of street judges in different poses doesn't seem needed (There are still a few from the old GOMC1 range you could recast if you want to quickly expand the range)

I'd like to see what makes Mega City One so cool, it's crazyness. Neon Knights, Bite Fighters, Wreckers, Titan Judges and more gangsters to pad that range out...As i have a Fattie gang, I'm a little bias, but Flab Fighter, a Coach and a Female Fattie would be amazing.
Top

GMAN wrote:Glad to see the Kickstarter is going so well. Personally, I'm going to buck the trend by saying that I think there's enough Judges released so far, In the game itself, a Judge Force is only made up of a few miniatures, so dozens of street judges in different poses doesn't seem needed (There are still a few from the old GOMC1 range you could recast if you want to quickly expand the range)

I'd like to see what makes Mega City One so cool, it's crazyness. Neon Knights, Bite Fighters, Wreckers, Titan Judges and more gangsters to pad that range out...


I find myself agreeing with GMan. The way the game works the judges cant take to many models.
Like he said there is so much more that makes MC1 special.

Maybe we should move away some from the JD and more on other factions that can get just as crazy.
Sector 301's adventures: http://judgeblotter.blogspot.com/
Top

Out of the list above, my definite buys would be: And also, how about a Judge Child (both as Owen and then as The Mutant) – I’d quite like to see the game-play of a character on one side but subtly undermining its own side’s dice rolls and weakening them!

I agree the points about Judge variants – I like the uniformity of the equipment as it is and feel that street units with all this extra would be rare – I think it inspires more tactical play knowing that Judges are very strong themselves but that a well-equipped gang could out-gun them.

I really like the way that Mongoose are looking at both giving a few extra factions while also adding some depth to the existing factions (the same 5-8 models as a whole gang can be a bit dull!)

As for a further ‘set’ (hopefully a kickstarter stretch) would be a specific Dredd and Anderson each on foot and lawmasters – if not then the Sovs are such a (so far) unplayable but regular enemy they deserve a place at the table.
Top

I second a Judge Child.

I should have stated that I come from the background of the RPG, and not the wargame, but I'm going to get my group to try the wargame. Speaking of GOMC1, I notice they haven't reproduced the female street judge figure, so recasting those old models would definitely help satisfy me. A male psi-judge would also be nice (hence my suggestion of Shenker and Omar), especially if Anderson is coming soon. I love the SJS, you won't hear me say boo to more models, they also make for good Judge vs. Judge fight scenarios even without Cal.

I was thinking about the coming Dark Judges, and remembered the old videogame, Dredd vs. Death. They had a variety of robed, bone-clad cultists, and I think that the Dark Judges could become their own full-fledged force if you include these characters as cheap alternatives. This way you could field just a single Dark Judge, say Fear, and back him up with less-expensive fodder. It would be fun and thematic with rules exposing your own cultists to the wrath of your own Dark Judge. You could even introduce Dark Judge supporting characters such as Nausea and Phobia.

This is just an idea, but I liked the Scrawler suggestion. I thought of the reusable decals I used to play with when I was a kid, where you could stick them on a window and peel them off again. It might be fun to create something like that for Scrawlers so they could run around tagging different wargame terrain instead of taking melee and shooting actions to satisfy their own victory conditions, or earn money with rules akin to a vid reporter. The more pieces of unique terrain they scrawl, the more they earn for your side. People could just buy their own stickers for this purpose, but I thought it'd be fun to have an official sheet with things like "DROKK THE LAW," "DREDD GO SPUGG," "FREE SKID," or maybe an x'd out judge helmet. You get the idea.

Protesters may be an interesting new fig. If you make an eldster/crock blocker with a tri-corner hat, holding a sign so I can paint something on it like, "IT'S TIME FOR TEA," well, I'd just be giddy.

some MC-1 terrain would also be pretty cool
Top

Posted this on teh other model request thread but got no reply.

Justice Department "Space Marines", why not? 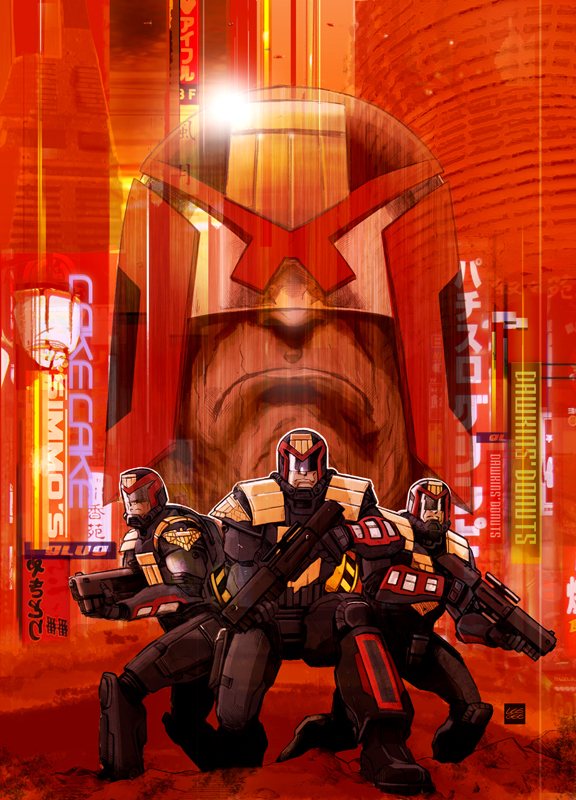 Yeah, I would go for those for sure. I have been trying to work out a way to convert them from existing miniatures ranges for a couple of years now, but a box of a handful of them would be great.

It would allow for games based on Insurrection too

Users browsing this forum: No registered users and 40 guests