thanks, i have never tried humbrol brand, but i will pick some up.
Top

Where did you get that Minbari ship, or is it a scratch-build? It appears to be the presidential transport from "The Lost Tales", which certainly wasn't produced by Mongoose, and if it's a scratch-build then it's a very good one!
Smiert Spam
Top

It's a fan made proxy for the Valen from the lost tales. Send me a PM and I'll give you the info.
Fire bad, tree pretty.
Top

Like the Corps, I acquired a second hand liner and modified it. For reference I used a few screenshots taken from the relevant season 5 episode. VLC to get the snapshots and Photoshop to analyse them were extremely useful in this project!

The first modification was the engines. The liner model doesn't have any. So the exhausts are made from wooden dowel while other details are balsa and thin plastic rod:

Next was the bridge. The one supplied with the liner model is too big. So I scratch-built a 2/3 size copy from balsa.

And then there are the spikes. Lots of them - 28 in total! The screenshot shows the spikes to be very thin compared to the diameter of the ship, which doesn't work very well with the soft metal used to cast miniatures. But these ones are rigid steel rods with bits of close fitting metal tubes for the bases. So, six clusters of 4 plus one smaller spike each side of the logo.

The logo is light colour on a black background with a white border. On the screenshot, that border shows up against the base hull colour, which is therefore light grey rather than white. The colour of the logo is difficult to judge as the ship is lit by the red glow of hyperspace but Photoshop indicated that the logo has a lower proportion of blue than surrounding areas. That gave me all the excuse I needed to make the logo yellow and add a bit of colour to the ship. Another dash of colour is the red docking bay, exposed because the smaller bridge is mounted higher up.
Smiert Spam
Top

Perhaps. For one thing, there will be several expendable mundanes - er, loyal EA ships - in front of the Mothership. For another, Psi Corps plus some associates have funded a new ship-building programme (in real life, I've recently bought a few new ships from Agent One). The first to be completed was this:

First of the First Ones

For no reason other than it was the quickest and easiest of the Ancients to build and paint, being just two pieces:

Screenshots from "Into The Fire" indicated that two of the arms should be angled down, so I bent them a bit. I had to file off a bit of excess metal from the main body, which lost some of the pock-mark detail, but the "real" one is more streaky and less spotty anyway. So I dragged a coarse saw sideways up the body a few times before painting and then inking the model.

There's a bit of confusion about which ship this is! B5:ACTA's Fleet List shows this model to be the Lordship, while the spherical one surrounded by spiked saucers is the Thoughtforce. AoG has them the other way round, and so do some other unofficial sites such as B5Scrolls (perhaps they got their information from AoG). So as far as I'm concerned, this is the Thoughtforce.

It probably doesn't matter much since only one First One is likely to be on the table, provided the other player knows which stats are being used.
Smiert Spam
Top

The T'Loth is of little use in a game, being a troop transport and somewhat underarmed for a Raid level ship (though very tough). But its presence in Series 1, and its significance to the plot, make it a model of interest to me. So here it is:

The wingtips are angled to compensate for the shape of the side pieces. Unfortunately they're too angled, so if the side pieces are just glued straight on then they end up angled as well, with the engines closer together than the bow guns. So I glued them on with the rear ends spread a little, creating a gap towards the trailing edge of each wing, then filled the gaps with Milliput. I've also added rods to the upper superstructure, lower bow dome and bow front - screen shots from "Midnight on the Firing Line" confirmed that there are no rods on the lower superstructure.
Smiert Spam
Top

Imagine having a nightmare about something like a Shadow Stalker with ten times as many Damage points, a 8AD beam instead of 3AD, range 30" instead of 18", and a big pulse type weapon for anyone who thinks it's a good idea to close to 20" to help break its stealth.

The Dark Knife is not as well armed as other Ancients but its speed and super manoeuvrability should make it more entertaining to play - at least it can move around at a decent speed, unlike some of the others.

This is the AoG re-release. It's also upside down. Or rather, judging by the screenshot I took from "Into The Fire", the original model is upside down, as the one in the screenshot appears to have five discs on the lower half whereas the original model has five discs on the upper half. The model had a metal strip fixed to what was its bottom, which was supposed to go into AoG's little black hex base. The model would probably have been unstable on a base that size, plus the soft metal bends easily and the strip would eventually have snapped off. Since I wanted the base at the other end anyway, I snapped it off myself, cut a slot into the new bottom, and glued in a short Games Workshop stem with epoxy, which also served as filler around the stem top.

The colour scheme of olive drab with black markings and fluorescent yellow "lights" round some of the discs also comes from the screenshot from "Into The Fire".
Smiert Spam
Top 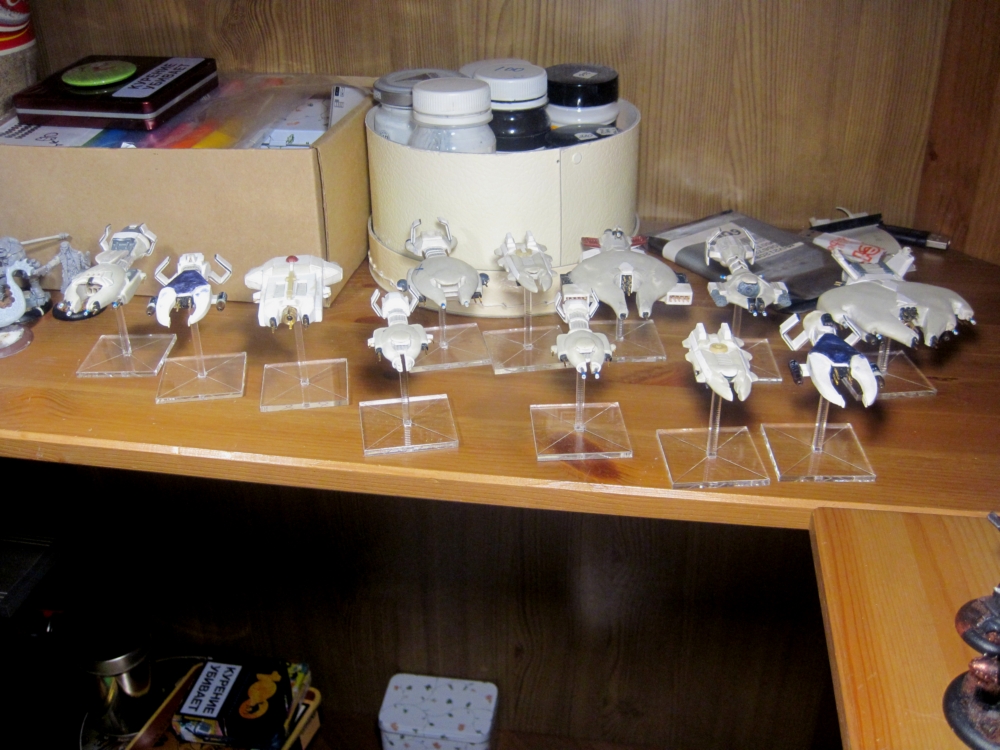 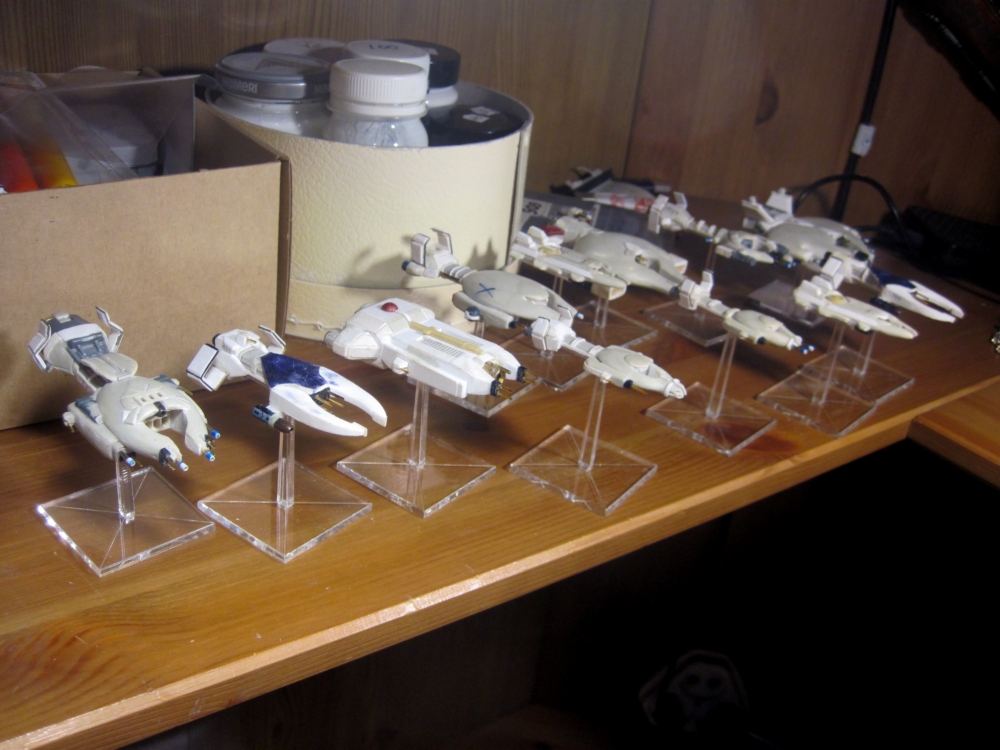 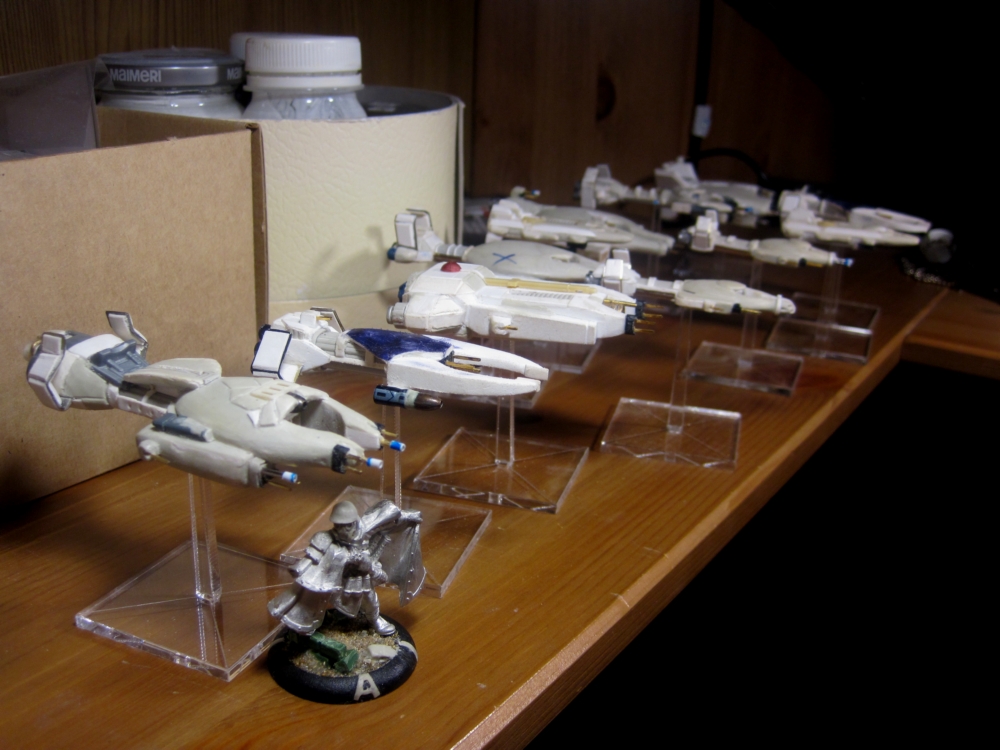 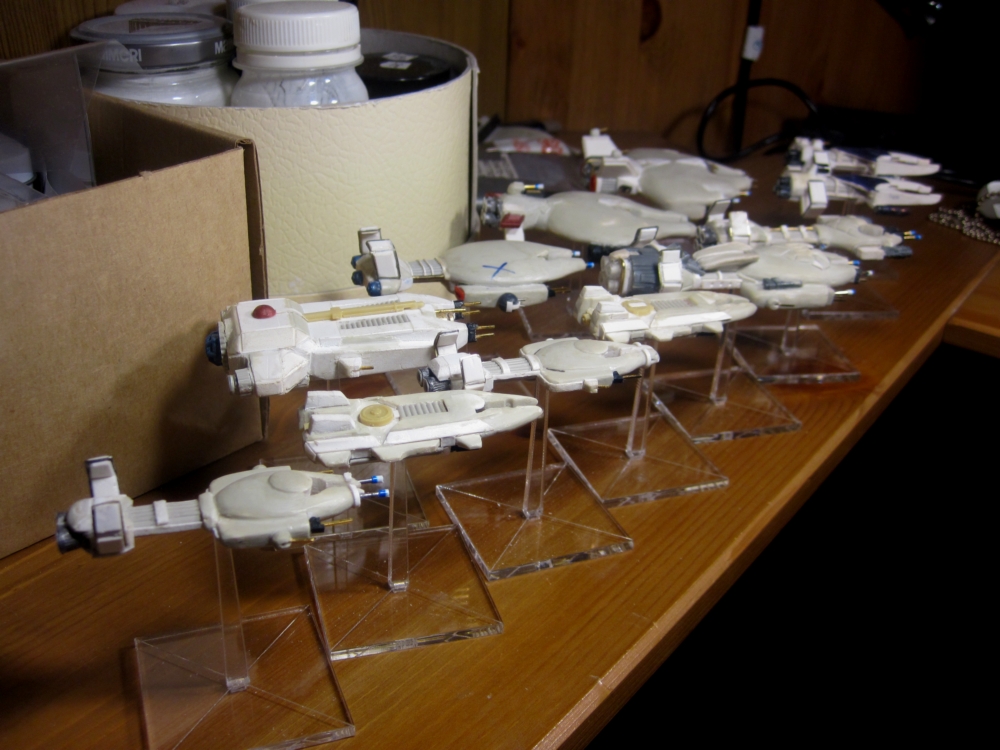 Nice work! How did you make the hulls?
Smiert Spam
Top

If the pen is mightier than the sword, just imagine what you can do with a paintbrush and modelling blade.

Outstanding....but I really have to ask, why?

1. Good challenge for me. I always wanted realy original army in any system.
2. Light in weight than original metallic miniatures.
3. Sometimes l wanted some changes in design.
For example orignal Tikrit is same size as Omelos (even some smaller)...
I made it 20% bigger. 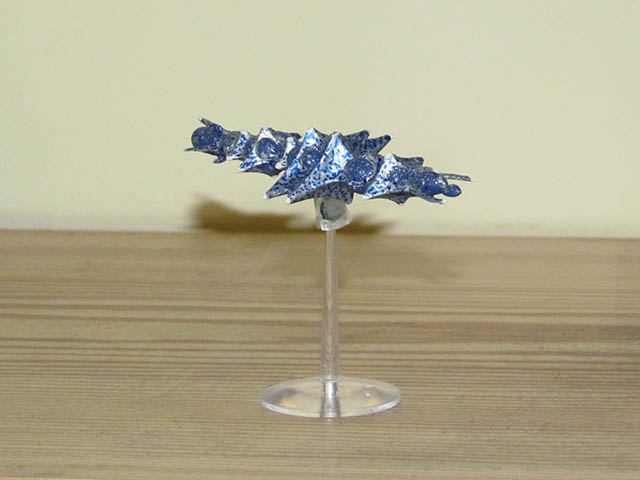 As supplied, the nose and tail were large ovoids - the tail looked more Drazi than Lumati! These were sawn off and replaced with more accurate parts built from Milliput, along with spiky bits made from plastic card.

The globular parts of the hull were painted blue and splattered with silver from an old toothbrush. The ridges and spikes were then painted silver and dotted with a fine blue marker pen. Points are highlighted with white.
Smiert Spam
Top 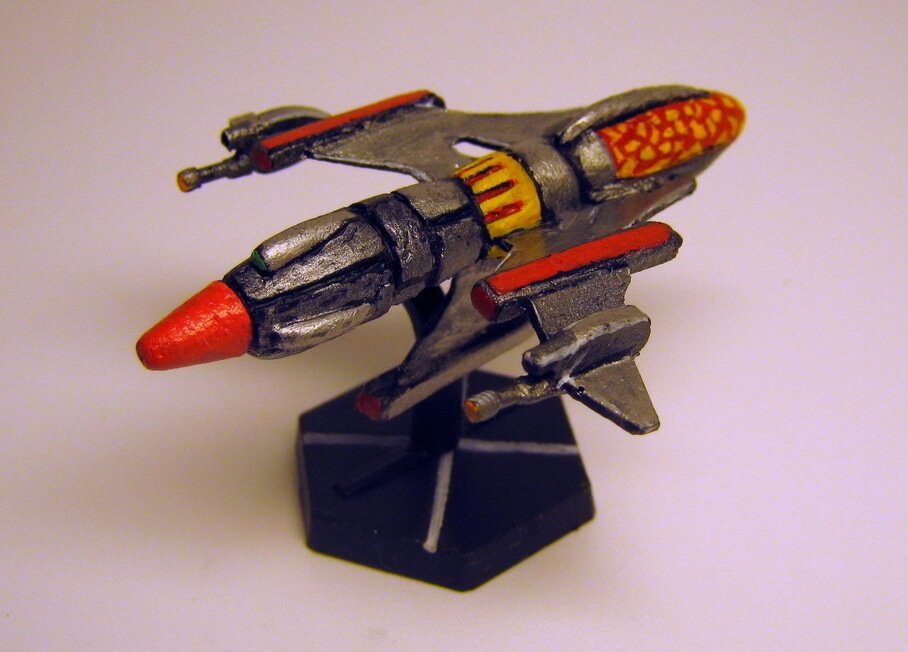 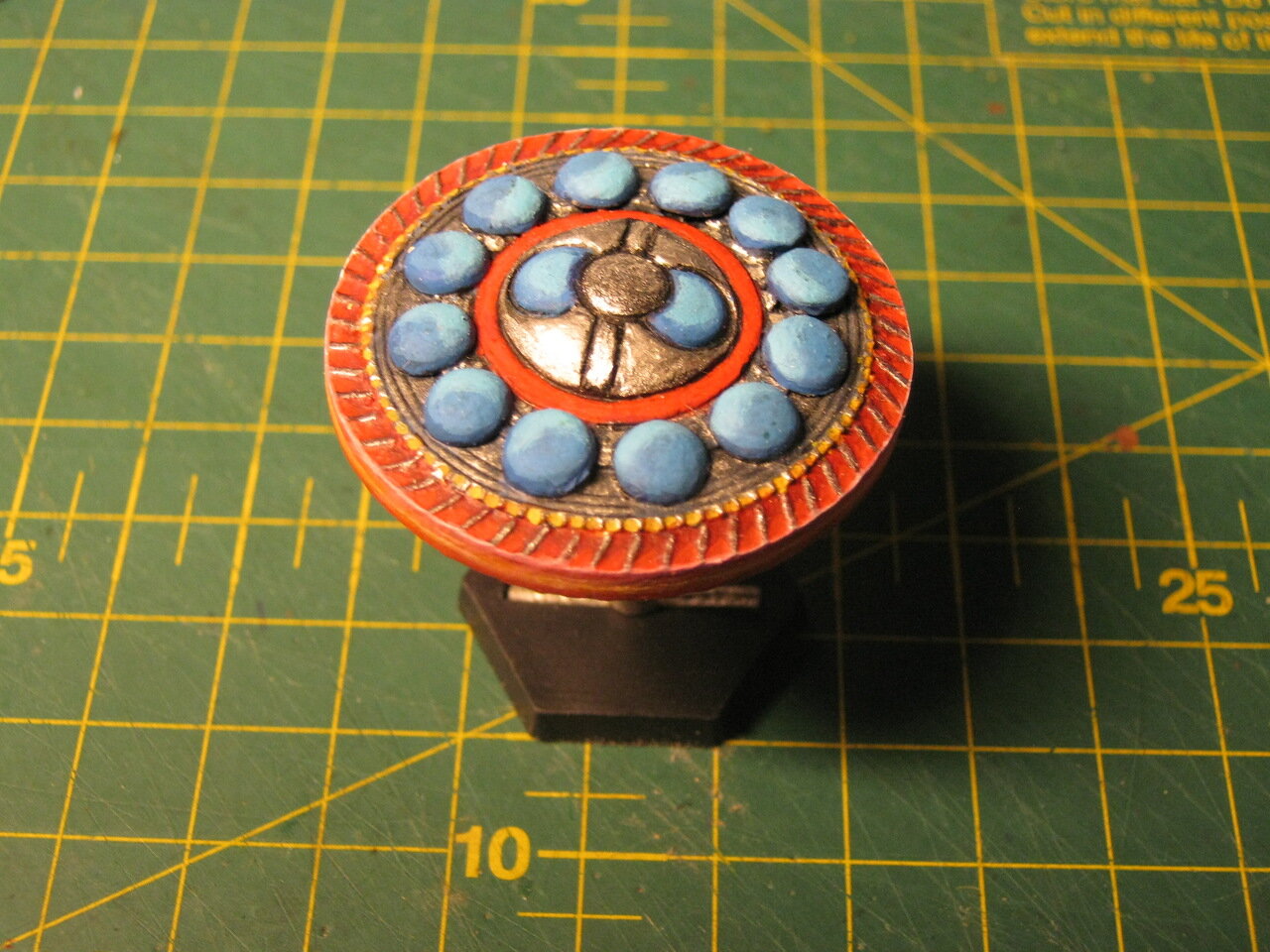 Very nice! How did you make it?
Smiert Spam
Top
Post Reply
599 posts